The Brutal History Of The Army–Navy Football Game

After 134 years as an independent in football, Navy finally joined a conference by formally entering into the American Athletic... 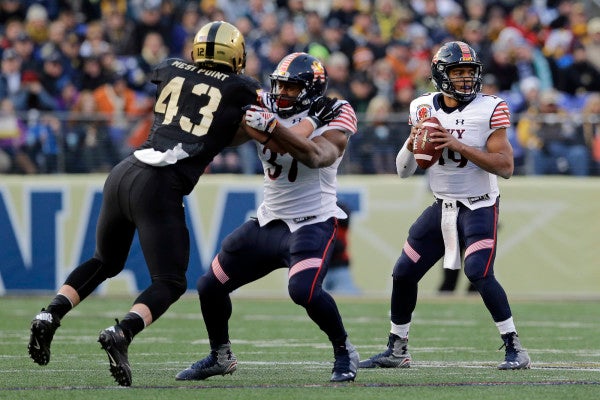 After 134 years as an independent in football, Navy finally joined a conference by formally entering into the American Athletic Conference earlier this summer. Naval Academy Athletic Director Chet Gladchuk lamented, “Independence had become outdated for the Naval Academy. Scheduling and TV contracts were being monopolized by the conferences and we felt that we had to join a conference in order to be able to maintain the stature we've enjoyed for so many years.”

However, Navy’s entrance into conference play does not change what has been a staple of college football for 115 years. Make no mistake: there is no team nor game within the confines of the AAC that can replace the stature of Navy’s biggest rivalry and game: the Army.

Since 1890, these two teams have met on the gridiron in fierce battles between the lines, but retain the utmost respect for each other once the final whistle blows. A look back at the first games between 1890–1899 shows the fierceness and fanaticism that has defined this game and built it into what is now known as the nation’s greatest college football rivalry, or simply “America’s Game.”

When Navy challenged West Point to the first game in 1890, the cadets had no real experience with the exception of one player. Dennis Michie, who later became known as the father of West Point football, organized, coached, and trained that first team. Navy had been playing organized football as early as 1879, so the midshipmen’s experience gave them an edge, even though West Point’s squad allegedly averaged at least 10 pounds more than Navy’s.

Navy’s experience and use of nautical-themed signals appeared to confuse the West Point team early on in the game. According to a New York Times article published Nov. 30, 1890, calls to “splice the mainbrace” signaled for Navy to create a hole in the center of the Army line. “Tack the ship” meant for the half back to run around the end. Even Navy’s rendition of an Army artillery call of “Fire to the front, change front to rear for the left piece” merely signaled the right guard was to run around the left end of West Point’s line.

The New York Times described the game as an “internecine struggle,” but the contest was more than a civil skirmish; it was brutal and extremely fierce. Fistfights occurred throughout the game. Players were punched, grabbed and walked away with black eyes. In a play near the end of the game, four players were injured so badly they were unable to get up. Cadet Kirby Walker, the West Point quarterback, was unable to be revived by the team surgeon after his fourth knockdown. He was carried off to the hospital where he would remain for 13 days recovering from concussions.

From “Football for Player and Spectator,” published in 1905.

Spectators also lost all sense of decorum. Fans screamed for blood. Even those in high society got into the match. One account noted that a stately lady on the Army side dropped her manners and began yelling in an unladylike fashion screaming at the cadets to “Ghhuard your man! Ghhuard your man!” The game brought out raw emotions, even from a high society member during the refined Victorian period.

However, once the final whistle blew, all was forgiven. Players from both sides joined in mutual congratulations and even attended a formal dance together that evening. Final score: Navy 24, Army 0. Regardless of the multitude of injuries and raucous behavior on all sides, the basis for future rivalry had been laid down.

That first game would set the tone for college football’s greatest rivalry, but the injuries and fanaticism were almost too much. The rivalry would soon hit hard times because of its brutality both on and off the field.

Football in the late 1800s was more similar to rugby. The forward pass was not legal yet and players wore limited gear during games. According to Gene Schoor’s classic compilation of Army–Navy stories, two equipment inventions were derived from these early games. The first helmet did not appear until the 1893 season when Midshipman Joseph Reeves wore a moleskin contraption on his head made for him by a “gentle old lady from Annapolis.”

The first Navy teams wore uniforms made of canvas in an effort to make themselves more difficult to tackle. Midshipman William Maxwell noted that “canvas wet with sweat or water was mighty slippery to hold on to.” He said he learned this fact from furling sails during midshipmen training, particularly on cold days.

With minimal protective equipment, teams ran at each other in the form of a flying V that resulted in huge, bone-jarring collisions. West Point’s chief surgeon, Major P. F. Harvey, noted in a New York Times article that during the 1893 season, there were 97 cases of injury from sports treated in the cadet hospital, with the bulk of them a result from playing football. Harvey went on to remark, “It is doubtful, in my opinion, if the benefits derived from playing this game … are commensurate with the risks it entails to life and limb.”

By the fourth contest in the series in 1893, the game was already seen as an opportunity to win bragging rights between the entire military. Unfortunately, the crowd became extremely rowdy and a free-for-all slugfest broke out in the stands. A brigadier general even punched a rear admiral in the nose. The admiral then challenged the general to a duel, according to a 1990 book by Bruce Nash.

Different accounts contradict whether an actual duel occurred, but the actions of the crowd and even those of general officers upset President Grover Cleveland so much that he called a special cabinet meeting with the secretary of the Navy and secretary of War. The result: Cancellation of the series for the next several years by forcing each team to only play home games, making it impossible to play each other.

It was not until then-Assistant Secretary of the Navy Teddy Roosevelt wrote Secretary of War Russell Alger in 1899 lobbying for the reinstatement of the game did the rivalry resume. Roosevelt liked the game of football so much, he took measures to preserve football by reducing the brutality with established rules, mandatory equipment, and sanctioning bodies.

But perhaps what has allowed this game to retain its place as the greatest rivalry in college football is that it’s merely a prelude to something more important. Each cadet and midshipman will go on to military service once their playing days are over. Some will make the utmost sacrifice in the defense of our nation. The early stars of this rivalry were no exception to this fact.

Michie of Army and Worth Bagley for Navy were two of those early stars. They only met once on the gridiron in 1891, but the two knew each other well and understood the brotherhood that comes from playing a game that will soon end and where more serious consequences are at stake. Both men died in their twenties during the Spanish American War. Bagley, while on the deck of the USS Winslow in Cuba’s Cardenas Harbor, was struck and killed by shells from Spanish gunboats. Michie was killed in action on San Juan Hill while leading his men from the 16th and 6th Infantry.

When Navy won its 13th game in a row last December against Army, Ken Niumatalolo became the head coach with the most wins in Navy’s history. He was hoisted upon the shoulders of two of defensive lineman. Asked about his awkward jaunt aboard the two players, Niumatalolo said, “I tried to get down. I have so much respect for Army, I didn't want to upstage anyone.” Mutual respect, even during the longest streak of the series, is the real story behind the Army–Navy football game.

This contest is simply more than a game. It is a chance for Army and Navy to showcase the talents of young men who will one day serve the nation on distant fields of battle. What rang true for that first game in 1890 still rings true today: The bonds of brotherhood between the participants are unbroken by winning or losing because in short order both sides will join the same team in defense of our nation.