After more than a half-decade operating in a favorable recruiting environment that allowed the U.S. military to be increasingly selective... 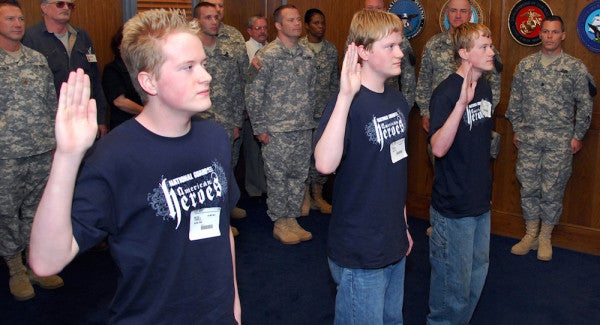 After more than a half-decade operating in a favorable recruiting environment that allowed the U.S. military to be increasingly selective and to meet most recruitment goals, the new environment is “likely to become significantly less fertile in the near future,” according to a new summary report released by CNA.

“Population Representation in the Military Services” is CNA’s annual congressionally mandated study of the demographic makeup of the personnel serving in the U.S. military. This year’s report, released on Feb. 10, pins 2014 — the most recent year for which data is available — as a turning point in which the increasingly strong civilian labor market and declining Department of Defense budget begin to erode the bargaining position of recruiters interacting with American young adults.

The report warns the DoD that “without sufficient planning and resources, military recruiting will be characterized by 'boom and bust’ periods, as has been the case in past years.” The downsides of increased volatility in recruiting are plentiful, including higher recruiting costs and the potential to recruit lower-quality service members.

Related: 5 tips for recruiting hipsters into the military »

CNA researchers note that a strong economy and smaller recruiting budget is leading to a talent pool that is shrinking faster than the military is downsizing. Since 2009, there have been a decreasing number of applicants for each enlisted position available across the services. Over the last 30 years, notes CNA, approximately 60% of all non-prior service, or NPS, applicants for enlisted positions have been accepted by the military; today, applicants have a 70% chance of being accepted. CNA notes that even though the military has largely met recruiting goals in recent years, it no longer has much margin for error, and as a result “should expect NPS recruit quality to fall.”

While CNA found that the military’s enlisted non-prior service recruits in 2014 were better educated than comparable civilians, it projects an eventual decline in recruit quality that cannot solely be blamed on the improving economy and shrinking military budget. CNA highlights a trend that has been discussed ad nauseam in recent years, reporting that the population of potential new recruits in the United States, ages 17-24, have “become increasingly unqualified for military service.” A recent DoD study on this age cohort, cited by CNA, found that “only 13 percent of youth would qualify without a waiver, be available and qualified to enlist without a waiver.”

This prediction is troubling, as the military depends on these non-prior service applicants to fill most of its active-duty positions. Prior-service applicants only account for an average of 1–2% of new active-duty enlisted personnel across the services in recent fiscal years. Prior service accessions play a much bigger role in the Reserves, where they comprise over 40% of total enlisted accessions each year. That is unsurprising, though, as the Reserves are generally less dependent on the 17–24 age cohort.

Moving past the discussion of the military’s recruiting challenges, the full report contains a great deal of data on today’s military personnel, including a special section examining the diversity of today’s military. The report for 2014 looked collectively at race- and gender-related data for the first time, and found that “for both commissioned officers and enlisted personnel a higher percentage of female accessions than male accessions came from all minority groups.”

CNA also broke down the population of the major military occupations by race and gender. Since the military is just opening up combat positions to competition by women this year, it is unsurprising that men are proportionately much more likely to serve in infantry, gun crew, and seamanship positions. Women, on the other hand, dominate the medical and administrative fields.

Some of the data in the diversity section raises interesting questions about equality of opportunity in the military. For example, data for positions within the administrative jobs field shows that minority service members of both genders are proportionately twice as likely to serve in administrative jobs as are white service members. In the report, CNA theorizes that the ability of women to compete for combat jobs could have a ripple effect that transforms the entire occupational distribution of the enlisted force.

The report is intended to provide a full understanding of the U.S. military’s current and historical demographics. It does not provide recommendations for addressing the issues it highlights, leaving those actions up to Congress and the military. As such, the report can be used to justify a variety of positive, neutral, and negative conclusions based on one’s point of view and biases.

Regardless of a reader’s perspective, “Population Representation in the Military Service” is a valuable, data-rich resource for current service members, veterans, researchers, politicians and anyone else seeking to understand those who serve and those who are eligible to serve in our nation’s military.