The Ugly, Un-American Rise Of Islamophobia

The other day, after what I felt was an innocent tweet, my iPhone alerted me to replies full of reproachful... 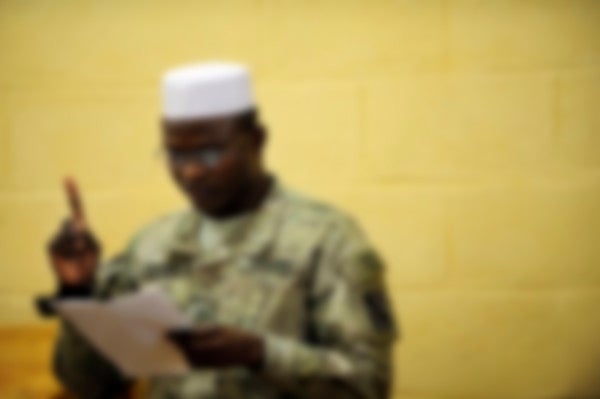 The other day, after what I felt was an innocent tweet, my iPhone alerted me to replies full of reproachful labels characterizing me as being an “Obama-lover” or “Not a Real American.”

Next up in the volley of attacks, I was called a “traitor” by an anonymous individual who compared my military service as a infantry squad leader and intelligence cell chief in the Marine Corps to one of the great villains of the American Revolution, Benedict Arnold, who infamously defected from the Continental Army to join the British in 1780.

And what egregiousness had I caused on social media to evoke this condemnation on my character, what monstrosity had I caused that was apparently in defiance of God and our nation’s forefathers? I defended Islam.

More specifically, I defended the prospect of an American man or woman being allowed to wear the uniform, serve honorably as a United States service member, and also happen to believe in Islam. My remarks were not even directed in the defense of a specific person, merely the aspect of an Islamic service member.

To bolster their argument, these critics pointed to Army Maj. Nidal Hasan, who fatally shot 13 people and wounded more than 30 others in 2009 in Fort Hood, Texas. The suggestion here is that Hasan’s actions give cause to label all Muslims in the military as traitors. This would mean that the thousands of estimated Muslims who joined the military voluntarily, and have deployed to the wars in Iraq and Afghanistan, are traitors.

This discrimination toward American Muslims extends beyond the tiny keyboards that compose our Facebook and Twitter messages, beyond social media. My recent experience on Twitter underscores a troubling Islamophobia that can seem rampant in parts of our country.

It’s evident on the website of political activist Joe Wurzelbacher, also known as Joe the Plumber, who gained notoriety during the 2008 presidential election. Visiting his website, users are presented with a modal prompting them to like Wurzelbacher page on Facebook if the Facebook button if you think Islam is an “EVIL” cult and should not be allowed in America.

Joe Wurzelbacher, also known as Joe the Plumber, presents some visitors to his website with this modal.

But I digress to my argument that night — with the simple notion that despite the insidious shooting in Chattanooga or the treacherous actions of Hasan, I cannot concede to the growing dogma that all Muslims should be deported from our shores, to include, in one person’s opinion, members of the armed forces serving honorably with absolutely no ties to terrorism or extremism —“If they are Muslim, I don’t trust them,” as she put it.

And while I would like to heed the advice of my friends who simply dismissed this creed as evidence of rational ignorance and blatant bigotry, I can’t help but feel somewhat discouraged about this creeping ideological thinking and how some proclaim that eradicating all Muslims is somehow American.

Under the banner of Joe the Plumber’s website declares the motto, “It’s not about right and left …it’s about right and wrong.” Unfortunately for Joe and other like-minded individuals, they’re categorically placed on the “wrong” side of the argument, according to a few signers of the Declaration of Independence.

In fact, the idea of removing Muslims from the fabric of the United States goes against the very principles of what the Founding Fathers intended as presidents George Washington and Thomas Jefferson campaigned for the rights of Muslims in a country still in its infancy, according to James Hutson, who serves as the head of the manuscript division for the Library of Congress.

During the Revolutionary War for example, American Muslims served under George Washington — from Bampett Muhammad, who fought for the “Virginia Line” — to Peter Salem, who some historians believe fired the shot that mortally wounded British Marine Maj. John Pitcairn at the Battle of Bunker Hill.

A year later in 1776, Jefferson demanded recognition of the religious rights of the “Mahamsan” [Islam], the Jew, and the “pagan,” according to Hutson’s research, which also found that Richard Henry Lee, a signer of the Declaration of Independence and an early member of Congress, made a motion in the Second Continental Congress on June 7, 1776, declaring that “True freedom…embraces the Mahomitan and the Gentoo (Hindu) as well as the Christian religion.”

Nearly two decades after Lee’s motion in Congress and the start of the Revolutionary War, Washington wrote in a letter to the members of the New Jerusalem Church in Baltimore, saying, “We have abundant reason to rejoice that in this land, the light of truth and reason has triumphed over the power of bigotry and superstition… In this enlightened age and in this land of equal liberty it is our boast, that a man’s religious tenets will not forfeit the protection of the Laws, nor deprive him of the right of attaining and holding the highest offices that are known in the United States.”

Yet, despite the intentions of the Founding Fathers to weave all faiths into the framework of the United States, today, the sentiment toward Muslims is anything but inviting.

Prior to 9/11, the FBI found that anti-Muslim hate crimes averaged between 20 and 30 per year, a statistic that skyrocketed looking in the post-9/11 world, where hate crimes toward Muslims have consistently hovered between 100-150 annually, according to The Washington Post. The Post additionally put these figures into perspective by indicating that the modern numbers represent an increase that is “roughly five times higher” than statistics from pre-9/11 data. Hate crimes against Muslims in the United States could be even greater, the Post report states, as participation in the Uniform Crime Reports program is voluntary.

Politically, the divide is clear between Republicans and Democrats, according to a 2014 Pew Research Center survey. The survey asked to assess how warmly or coldly respondents felt toward a specific demographic, on a scale of 1-100. The Pew Research Center called it a “thermometer rating.” The 2014 survey found that political conservatives consistently felt coldly toward Muslims, with an average rating of 33 out of 100. These views toward Islam were significantly lower than the 47 average rating among political progressives, considered by the survey to be in the neutral range.

This bias is statistically unfounded. When the Sept. 11, 2001, terrorist attacks reached their 10th anniversary, there was no evidence of rising support for Islamic extremism among Muslim Americans. The Pew Research Center found the opposite in a 2011 survey examining Islam in the United States. That survey found that American Muslims continue to reject extremism by much larger margins than most Muslim communities surveyed by the Pew Global Attitudes Project.

Still, despite the historical evidence of how Muslims contributed to the founding of the United States or statistics showing the persecution of peaceful Muslims, the call to eradicate American Muslims from the United States continues.

Though contrary to the ignorance and prejudice, simply put, American Muslims — or for that matter innocent Muslims abroad — who have no links to terrorism or the extreme perversion taking place within their religion, should not be equated to the Hasans and bin Ladens of the world, labeled traitors, and consequently deported. That ideology is un-American.