This C-17 crew fought near-zero visibility and broke diplomatic protocol to save a life. Now they’re up for awards 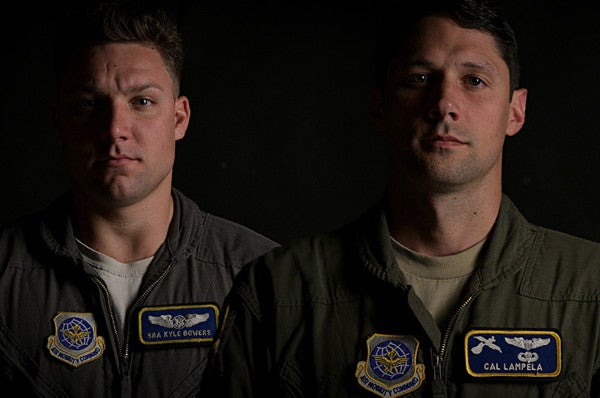 Air Force Capt. Forrest “Cal” Lampela was about to put the aircraft landing gear down in Shannon, Ireland, eight hours into a flight. If all had gone according to plan, he and his C-17 Globemaster III crew should have been more than halfway over the Atlantic.

He couldn't see the runway because of dense fog, catching a glimpse of it from only 100 feet above the ground — the absolute minimum altitude to which the large transport aircraft can descend before its pilot must either call for a landing or to abort approach.

Somewhere below, an ambulance stood by, waiting to pick up a sailor who had been wounded in combat and was in critical condition.

“I was a little bit afraid of where the ambulance was going to be because I didn't want him to try to run up on the jet while we still had engines running, because the fog was that bad,” Lampela said.

He recalls it as “the most challenging landing that I've ever done.” But on top of dangerous, foggy conditions, Lampela and the crew, call sign Reach 445, had just entered a country where they had not received diplomatic clearance before touching down.

“I wouldn't do that unless it was an emergency,” Lampela said in a recent interview with Military.com, recounting the April aeromedical mission to transport the sailor. He and his team belong to the 14th Airlift Squadron out of Joint Base Charleston, South Carolina.

“If I'm going to fly into a country without diplomatic clearance, it's going to be loss of life or your craft or safety of flight,” he said. “We were … essentially a flying ambulance.”

The decision they made to turn back from the U.S. and head to Ireland to save the sailor's life got the Air Force's attention: The six airmen are now under consideration for the Air Medal for making the right call under difficult circumstances. The sailor remains unidentified for privacy reasons.

“For their act of heroism and success in operating beyond what is expected and routine, Capt. Lampela and his crew were submitted to be awarded single-event Air Medals,” Lt. Col. Kari Fleming, 14th Airlift Squadron commander, told Military.com on Monday. “It is my honor to recognize this deserving crew with such a rare decoration.”

The medal is awarded to U.S. and civilian personnel “for single acts of heroism or meritorious achievements while participating in aerial flight … in actual combat in support of operations,” according to the service. It can also be awarded to foreign military personnel.

“Our airmen dedicate their lives to serve this great nation to deliver lifesaving capabilities, so our wounded may return to their loved ones,” Gen. Maryanne Miller, head of Air Mobility Command (AMC), said in a separate statement. “The crews of Reach 445 highlight that our incredible airmen are our greatest advantage.

“Sound decision-making and superior care once again bring a hero home to his family,” she added.

The crew had begun their transit at Al Udeid Air Base, Qatar, reaching Spangdahlem Air Base, Germany. But they had to delay the second leg of their journey because of bad storms on the U.S. East Coast. Their home base, Joint Base Charleston, had lost power; some squadrons there had been sent home early.

“We just bringing some stuff from Al Udeid back home to Charleston, we were in Germany for the crew to rest up,” Lampela said.

But “it looked like pretty terrible storms all the way across the East Coast,” he added.

Their delay meant they were the only C-17 in theater with the tools and space required to transport the patient to Walter Reed Medical Center outside Washington, D.C. They headed to Ramstein Air Base, approximately 70 miles away, to pick up medical teams from Landstuhl Regional Medical Center.

“We were told that he was in such a state that Germany couldn't care for him anymore, and Walter Reed the best trauma center,” Lampela said.

With the six members of the crew, the patient and the Critical Care Air Transport Team, known as a CCATT, there were 17 people bound for Joint Base Andrews, Maryland, said Bowers, the instructor loadmaster. The CCATT is known throughout the Air Force as a “flying intensive care unit.”

CCATTs typically transport a ventilator and monitors, along with other gear, she said.

“We have IV pumps, we have suction equipment — that's kind of the standard equipment,” Cogar said. “We can augment that with other things that are specific to the patient.”

Teams can perform surgical tasks, she said, but “it's pretty uncommon.”

“If I'm having a patient who's having issues, I try and alert the crew early on so they can communicate with ,” Cogar said of reasons why a flight would be diverted. “It's much safer and better for the patient to do on the ground, where you have a lot more resources available to you. So we try and kind of pre-emptively fend off any of those things that we think we may need to do.”

The sailor took a turn for the worse and needed immediate surgery. The medical professionals knew they'd have to divert or face a grim outcome.

“We were approximately halfway over the ocean when the patient started to destabilize,” Lampela said. The crew contacted the air operations center at Air Mobility Command at Scott Air Force Base, Illinois, to strategize.

“They couldn't get his blood levels under control,” Lampela said. “They brought enough blood for the flight, but he was bleeding out in one and, they thought possibly, two wounds. So they didn't have enough blood to keep him stabilized. Secondly, we needed dialysis because his kidneys had failed, so they needed a hospital.”

The crew looked at the available options.

“I was probably four hours from the tip of Canada, which even making it to Canada, there was nothing until I hit probably stateside, and I was probably six hours from Boston. I was approximately two hours from Ireland, probably three to England, and five hours to Iceland,” Lampela said.

University Hospital Limerick, about 30 minutes from Shannon airport, had the necessary equipment. They made the decision to turn around and head to Ireland.

In the back of the C-17, Bowers, the loadmaster, was trying to ease the stress, communicating back and forth with the cockpit and the cargo hold. He had already reconfigured the cargo hold to fit the sailor and the CCATT before they boarded.

Around 2 a.m., 60 miles from their approach to Ireland, Lampela got a call from air traffic control that fog had unexpectedly rolled in.

Wheels down in Ireland

Lampela had asked the pilots, Puckett and Dickenscheidt, to take turns in the co-pilot seat assisting, since they were about to do a Cat II minimum approach — meaning the pilot must make a decision whether to land at only 200 to 100 feet altitude.

He added, “The landing itself was not eventful. But I will tell you, with a patient you have in the back, and going through 200 feet above the ground, and you still don't see anything … you start to get really that you see the runway real quick.”

The sailor was taken off the C-17 five minutes after the aircraft landed. Soon after, Lampela was answering calls from both the Irish and U.S. embassies.

“They wanted to know several things, such as were we there to spy, or if we had anything that was not allowed in the country, such as guns or something like that,” he said.

Lampela called his chain of command in Charleston to say they would be delayed.

“I said, 'All right, uh, don't get mad. I declared an emergency. I'm in Ireland without diplomatic clearance or, if you hear something about me, it was warranted,'” he recalled.

After receiving clearance, the crew stayed in Ireland for 24 hours, waiting for the sailor to undergo surgery before flying him to Joint Base Andrews. He was transported in stable condition.

“Essentially, you wake up in the morning, and there's been many times where we've been picked off for different missions,” Lampela said. “So you're actually going here, you're going to this country, or a humanitarian issue pops up. So you're never really sure of … what you think you're going to do. But until you actually go do it, nothing's really guaranteed.”

Air Mobility Command has logged 245 aeromedical evacuations in the first quarter of this year, moving 1,183 patients. Last year, airmen moved 5,409 patients in 866 aeromedical events, according to statistics provided to Military.com.

While some Reach 445 members had been on aeromedical tasking before, the critical level made it rare.

“Every situation is different,” Bowers said. “We're constantly learning on a daily basis. There's never going to be a similar incident. But as far as, are we going to do better, get better and are we going to be more prepared? Absolutely.”

“In AMC and in the flying world, we preach this attitude of readiness,” Lampela said. “I'm humbled to have been a part of this opportunity.

“We woke up; we weren't expecting this. But because of our training, we were prepared to go out and do this. We were ready to go. And I'm glad it OK,” he said.

WATCH NEXT: A-10 Warthog Squadron Receives Rare Heroism Award For Bringing The Pain To ISIS In Syria