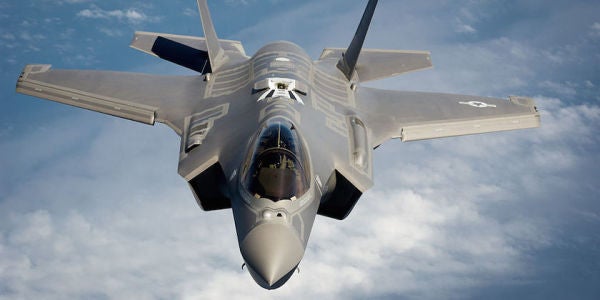 The world’s most famous dealmaker told reporters Monday that he has cut one with manufacturer Lockheed Martin to cut the cost of the F-35 Joint Strike Fighter by more than half a billion dollars.

According to multiple media reports, President Donald J. Trump told reporters in the Oval Office that Lockheed had cut $600 million off the program cost for the aircraft. CNBC reported that Trump said the cost reduction applied to the next 90 planes, indicating that the savings is for low-rate initial production (LRIP) Lot 10, a contract that had been expected to be completed before the end of 2016.

“I appreciate Lockheed Martin for being so responsive,” Trump reportedly said, according to the outlet.

Officials with Lockheed Martin released a statement just before noon that appeared to confirm Trump’s remarks.

“We appreciate President Trump’s comments this morning on the positive progress we’ve made on the F-35 program,” they said. “We share his commitment to delivering this critical capability for our men and women in uniform at the lowest possible cost to taxpayers.”

The Pentagon’s F-35 Joint Program Office has not formally announced a contract for LRIP 10 to date.

Since his election in November, Trump has publicly criticized the F-35 program on multiple occasions via Twitter and during speeches, saying the program was “out of control” and announcing that he had reached out to competitor Boeing Co. to price out a comparable F/A-18 Super Hornet in rebuke to rising F-35 costs.

Just days ago, Defense Secretary James Mattis followed up, ordering a review of the F-35 program, with specific comparisons to the F/A-18 E/F in an effort to provide a “competitive, cost-effective fighter alternative,” according to Pentagon spokesman Navy Capt. Jeff Davis.

Lockheed Martin CEO Marillyn Hewson told reporters earlier this month following a meeting with Trump that the company had agreed to “significantly” reduce F-35 costs moving forward. But at the time it remained unclear what impact this would have on current negotiations, particularly as costs for the F-35 are already falling. As larger number of aircraft are produced and international orders come in, Joint Strike Fighters are getting cheaper to make. Last year, Lockheed officials told reporters that the unit cost of the F-35A may drop from nearly $100 million to $85 million by 2019.

Negotiations between the government and Lockheed Martin for the most recent LRIPs has been tense, however. In November, after months of discussions without resolution, the Defense Department unilaterally finalized a contract for LRIP 9— a 57-plane, $6.1 billion deal. Lockheed released a statement condemning the move, saying the company was disappointed by the government’s decision.

Air Force Lt. Gen. Christopher Bogdan, head of the F-35 Joint Program Office, told reporters in December that JPO was hoping to reach a “handshake deal” on LRIP 10. He said officials were expecting a unit cost reduction of 6 to 7 percent for each aircraft variant in that 90-plane lot. With the aircraft variants ranging in cost from $102 million to 132 million in LRIP 9, the projected savings total close to $600 million.