Tyler Jarrell still had his senior year of high school to finish, but he knew what he wanted to do... 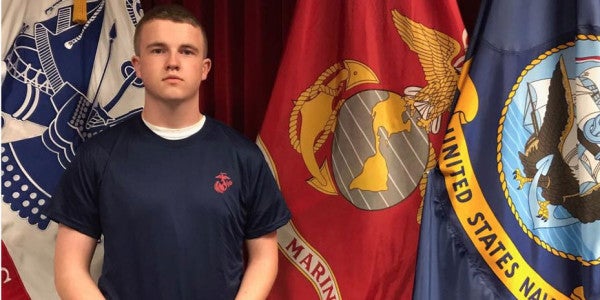 Tyler Jarrell still had his senior year of high school to finish, but he knew what he wanted to do next summer after graduation: claim the title of United States Marine. On July 21, he signed his enlistment papers.

On July 26, he was killed, the sole fatality in a horrific amusement-park accident that injured seven others at the Ohio State Fair in Columbus.

Fair is open & activities on as scheduled. Rides are closed & undergoing safety inspections. Our thoughts continue to be w/ those impacted.

Several of the injured, including the 18-year-old Jarrell, were on the 40-foot-high swinging, spinning “Fire Ball” ride when something malfunctioned, and riders on one section were thrown off high in the air — a tragedy captured on video by multiple bystanders, some of whom were also injured by falling debris.

One witness told CNN everyone nearby ran for their lives. “I just don't think I'll ever ride a ride ever again,” she added.

On July 27, the Marine Corps issued a statement to media outlets confirming that Jarrell had just enlisted in the service with hopes of becoming an infantryman or a combat engineer, according to Fox News.

“Our heartfelt condolences go out to Poolee Tyler Jarrell's family and all of those affected by his loss,” the statement read. “The Marines here are greatly saddened by this tragedy. We are truly proud to have known him as one of the brave few willing to step up and serve his country in the United States Marine Corps.”

Just four days before the mishap that took his life, Jarrell was featured on his recruiting station’s Facebook page:

Many Facebook users are now leaving messages of sympathy on the page.

Authorities said the ride had passed multiple inspections in recent days. Gov. John Kasich vowed there would be an immediate investigation, and all rides would shut down until they could be scrutinized further. The AP reported that several other states were shutting down similar rides until their safety could be assured. The Dutch manufacturer of the Fire Ball, KMG, also requested a global safety shutdown of all its machines.

There are reportedly 43 such rides worldwide; 11 are in the United States.