UNSUNG HEROES: The Marine’s Marine Who Gave All On The Streets Of Najaf In Iraq 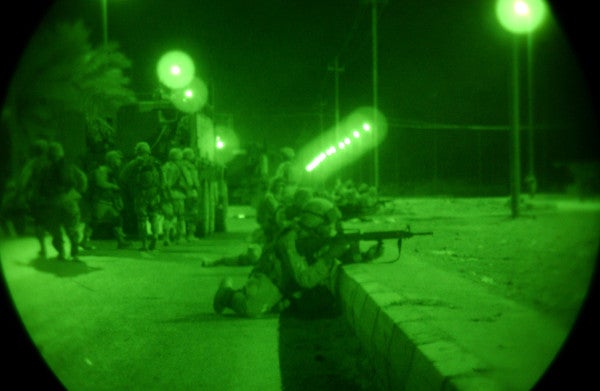 A decade ago today this week, on Aug. 26, 2004, Pfc. Nicholas Skinner was killed in Najaf, Iraq, while fighting off the Mahdi militia in a final push to surround the Imam Ali mosque. Skinner was a rifleman in Alpha Company “Raiders”, 1st Battalion, 4th Marine Regiment, the primary ground-fighting unit during the battle.

The militia had been using the mosque as a weapons storage point and stronghold due to its religious and cultural significance, which created a major dilemma for military decision makers. The Air Force had been dropping 500-pound joint direct attack munitions to destroy massive weapons and ammunition caches throughout the city, but commanders were under orders to exercise extreme caution in ensuring that the mosque was not damaged in any way. In addition, 1st platoon had already taken its first fatality less than a day earlier when Lance Cpl. Alex Arredondo was shot through the temple while checking on his Marines. Rockets, sniper, and machine-gun fire had already injured numerous other Marines.

On the day the he was killed, Skinner had been engaging enemy combatants in the streets below. The carnage and death all around his platoon’s position looked like something out of a graphic horror movie. Buildings were destroyed, bullet holes had sliced through every wall leaving streaks of daylight pouring into the rooms, and dogs had been seen walking around with human limbs in their mouths, taken off of the enemy fighters killed in the alleys below. Skinner turned his back to the window he had been firing out of when an AK-47 round from the alley below entered under his back just below his protective plates and exited his neck. Skinner was the definition of a fighter; he made it all the way to the operating table at the nearby hospital before succumbing to his wounds.

Skinner was a Marine’s Marine. He was a fighter, an outstanding grappler, and an experienced hunter and fisherman. He was a small town kid from Davenport, Iowa. He could fight longer, harder, and with more tenacity than anyone I have ever met. Back home, he had been a cage fighter with an almost undefeated record prior to joining the Marines in order to serve his country. Skinner was not just brave; he was heroic. He was a mix between Bear Grylls, Chuck Norris, Clint Eastwood, and the Dos Equis guy. That is no exaggeration either; literally, he was that good. He was always at the front of everything and never took it easy on anyone. One time when his platoon sergeant got sick during a boat raid, Skinner was the only one who had the balls to reach over and make fun of him about it. He joined the Marines because, as he said, “I love fighting, fishing, and killing … and Marines are the best”.

Skinner was an absolute warrior. Whether he was training, sparring, fishing, hunting, or even just cleaning his weapon, he had this steely eyed determination about him that set him apart. I remember being really pisssed off at him because I loved grappling too, but I could never beat him. Even on deployment, we would roll out the wrestling mats on the top deck of the ship and have grappling tournaments and I would just sit and watch Skinner beat guys two-to-three times his own size. He was a beast. Everyone brings their own personality to the table, but Skinner’s was just intense.

When our commanding officer offered a three-day pass to anyone who went and got the Raider tattoo on his arm, Skinner and his best friend sure enough showed up on Monday with Raider tattoos. They never did get their three-day pass due to our constant training cycle as we were about to deploy, but it didn’t matter to them; they were proud of that tattoo and the night before we left for Iraq, about 20 more Marines went and got the tattoo. When I found out that Skinner had been killed, I couldn’t believe it. I had this shocked disbelief that someone like that could die. When we returned home from Iraq, I went out that first weekend and got the Marine Raider tattoo just like Skinner.

When I think of Valhalla, I think of Skinner. He was hands-down the toughest Marine I have ever met.

Nick, I love you and miss you brother. Until we dine again at the tables in the halls of Valhalla.