Videos show Iraqi protesters storming the US embassy in Baghdad

Thousands of Iraqi protestors stormed the front gates of the U.S. embassy in Baghdad on Tuesday in one of the most violent incursions into the compound in recent years 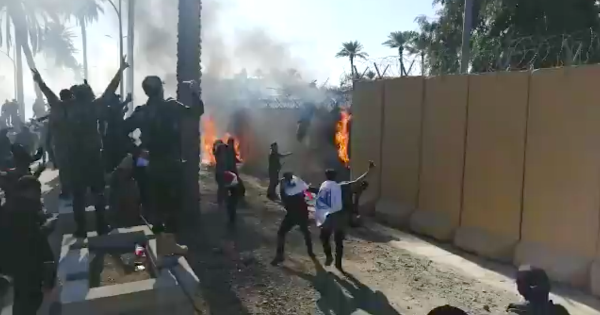 Thousands of Iraqi protesters stormed the front gates of the U.S. embassy in Baghdad on Tuesday in one of the most violent incursions into the compound in recent years.

Reuters
reports that the crowd managed to breach the front gates and burn a security kiosk but did not enter the main compound due to a swift response from Iraqi security forces.

The violent protests erupted in response to U.S. airstrikes against Iran-backed militias, purportedly carried out in retaliation for the killing of a U.S. civilian contractor in a rocket attack on an Iraqi military base.

President Donald Trump accused Iran of fomenting the protests,
tweeting: “To those many millions of people in Iraq who want freedom and who don't want to be dominated and controlled by Iran, this is your time!”

Several videos of the scene capture the chaos currently gripping the city:

PMF supporters are at the main gate of the US embassy in Baghdad trying to storm it, Iraqi Forces trying to push them back pic.twitter.com/AE1ODLtD5c

Tens of members & supporters of #IRGC backed Kataib Hezbollah (#PMU's 45th Brigade) are now protesting against #US in the backyard of its Embassy in #Baghdad's #GreenZone. If they try entering the building, #US private contractors who guard it from inside will open fire at them. pic.twitter.com/Q3unbrb14a