"I believe that we can trust them to read books like that and draw reasonable conclusions." 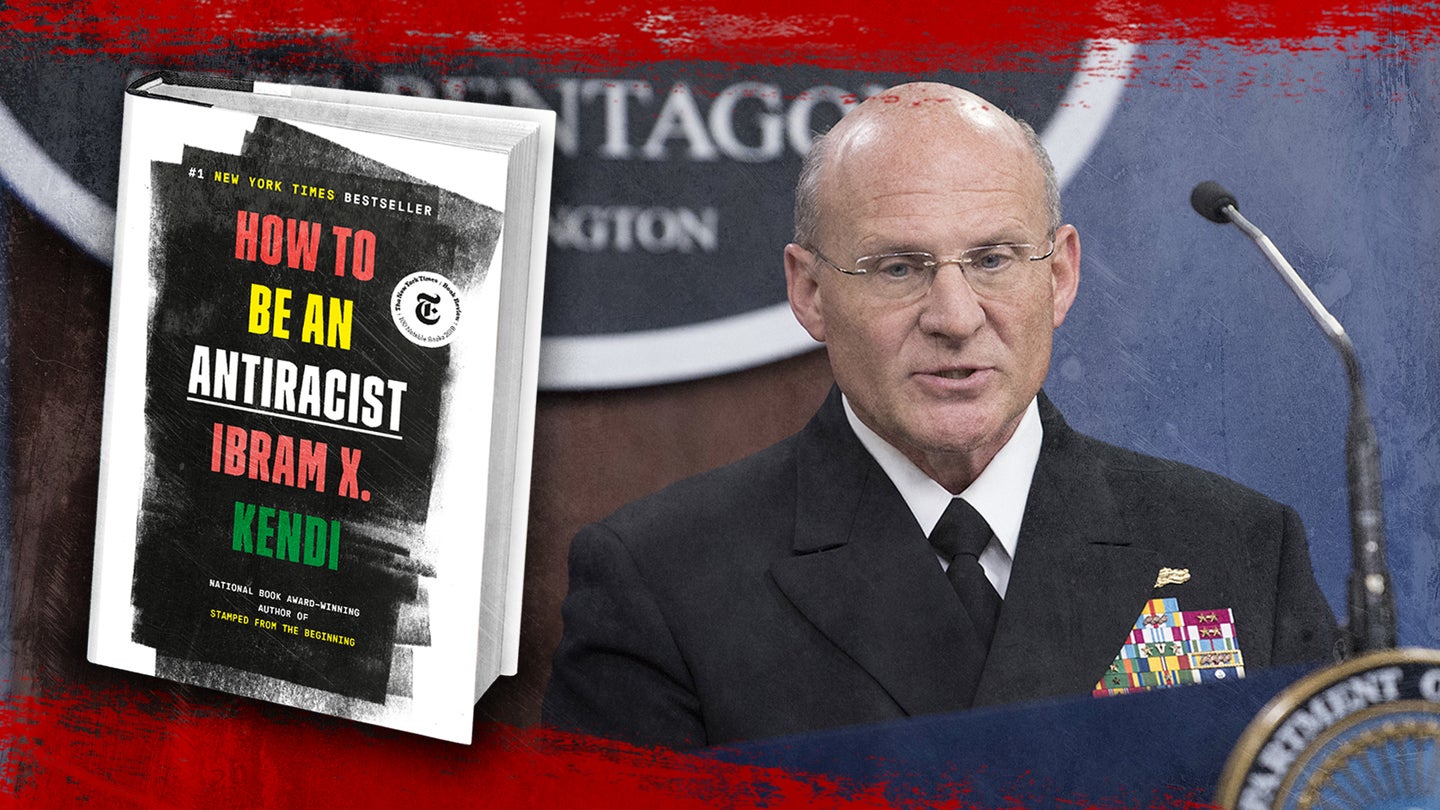 The Navy’s top admiral says he urged sailors to read books like Ibram X. Kendi’s “How To Be An Antiracist” in response to conversations with sailors after the murder of George Floyd.

“The reason why that’s on the list is because we set up a task force called Task Force One Navy after George Floyd’s murder,” said Adm. Michael Gilday, the chief of naval operations, in testimony to the House Armed Services Committee on Tuesday. “And that essentially came down to conversations in small groups at every command in the Navy so that people could tell their stories. Courageously come forward and tell their stories.”

Approximately 1 in 5 sailors reported racial discrimination on their assigned aircraft carrier in 2019, according to internal Navy surveys obtained by the Associated Press. Nearly a third reported hearing racial slurs, comments, and jokes aboard these ships, which function as floating cities with crews of roughly 5,000 people.

The Navy task force recommended Kendi’s book be added to Gilday’s reading list in order to help sailors understand different viewpoints, and it appears in a section of “foundational” books for sailors that focus on critical thinking skills so that sailors can “outthink and outfight any adversary,” the reading list website says. Other books in the section include “Ego Is The Enemy” by Ryan Holiday and “Tiny Habits: The Small Changes That Change Everything” by B.J. Fogg.

“And so, Kendi tells his story as a Black American growing up and the challenges he faced, but he’s also very self-critical,” Gilday said. “And I don’t agree with every assertion Kendi makes and every conclusion that he draws but I did find it to be a very helpful read, particularly in light of those conversations we were having. And that’s why I put it on the recommended list.”

The CNO’s voluntary reading list of more than 50 books also includes reads on artificial intelligence and autonomous weapons, guides on China’s rise and how it affects maritime strategy, and history books profiling Navy leaders or offering insights into World War II naval battles. But some Republican lawmakers have taken issue with the inclusion of Kendi’s work and other books on the list that they say has pushed the Navy into a “divisive political issue.”

Among them is Sen. Tom Cotton (R-Ark.), who used his questioning time during the hearing to ask Gilday whether he agreed with certain statements in Kendi’s book, repeating a similar line of questioning from last week.

“I want to give you a sampling that is included in books like this,” Cotton said, before offering passages without further context from the 241-page book: “The notion that capitalism is essentially racist and racism is essentially capitalist. That the only remedy for past discrimation is present discrimination. The only remedy for present discimination is future discrimination. That some individuals by virtue of his or her race are inherently oppressive or privileged while others are victimized or oppressed. That individuals can bear some collective responsibility or collective guilt for actions committed by members of his or her race.”

How do these books get on the reading list? Cotton asked.

“Sir, I chose a variety of books. There are over 50 books on my reading list to give our sailors a wide range of information from which I hope they can make fact-based decisions on both their ability to look outwardly at potential aggressors like China and Russia as well as looking inwardly and being honest with ourselves in areas that we need to improve,” Gilday said.

“In talking to sailors over the past year, it is clearly obvious to me and others that the murder of George Floyd and the events surrounding that, the discussions in this country about racism which go back for years and years and years, are still a painful part of our culture. And that talking about them, understanding them, is the best approach. And that, offering books like Kendi’s for people to read…and they don’t have to agree with every assertion Kendi makes. I don’t accept every assertion that Kendi makes and I wouldn’t think that all sailors would as well.

But they need to be exposed to it so that they’re making facts-based… We need critical thinkers in the Navy and throughout the military. In our enlisted force, again, we not only think outwardly but inwardly so that they make hopefully objective, facts-based decisions and draw conclusions in a world that is increasingly more difficult to get an unbiased view at a really tough problem.

Even if they’re looking at things on social media, artificial intelligence associated with those platforms feeds them more of whatever they tend to look at. I’m offering them one book among 53 as a different perspective.”

“Sir, with all due respect, I’m not going to engage without understanding the context of statements like that but these are the…” Gilday said before being cut off.

“In what context could the claim that capitalism is essentially racist possibly be something with which you would agree?” Cotton asked. Indeed, Kendi uses that wording in the book but argues that capitalism and racism have been historically intertwined as “conjoined twins.”

“The conjoined twins entered adulthood through Native and Black and Asian and White slavery and forced labor in the Americas, which powered industrial revolutions from Boston to London that financed still-greater empires in the eighteenth and nineteenth centuries,” Kendi writes, noting that even today, racial inequities in poverty, unemployment, and wealth persist.

“Sir I’d have to go back to the book to take a look at that,” Gilday told Cotton. “But again, this comes down to trusting sailors who are running nuclear power plants on submarines at hundreds of feet under the water under the polar ice caps. They are maintaining the most complicated and complex jets in the world. We put them in harm’s way every day and sir, I believe that we can trust them to read books like that and draw reasonable conclusions.”

But Cotton concluded that the book’s inclusion on the list as a waste of time. “Assigning books like these is not a way for the Navy to regain its focus, admiral,” he said.

The chairman of the Joint Chiefs of Staff, however, spoke on Wednesday about the importance of reading books to gain an understanding of different perspectives, even ones that you disagree with:

“I do think it’s important for those of us in uniform to be open-minded and be widely read,” said Gen. Mark Milley. “Our soldiers, sailors, airmen, Marines, and guardians, they come from the American people … I’ve read Mao se Tung. I’ve read Karl Marx. I’ve read Lenin. That doesn’t make me a communist. So what is wrong with understanding? Having some situational understanding about the country for which we are here to defend?”

And Sen. Tim Kaine (D-Va.) made a similar point during the hearing on Tuesday:

“The military has got to defend this country and even though that depends to some degree on platforms, it still depends most on people. And not people working in their own little sphere not connected to others, people working in groups. And if people are going to work in groups in a diverse society there’s going to be a lot of people in the group who aren’t exactly like them,” Kaine said, adding that there is perhaps no good book that hasn’t made at least some people uncomfortable.

“My favorite book is the Bible but I don’t like ‘the lash shall come first and the first shall come last.’ That makes me a little bit uncomfortable,” Kaine said.

“So I don’t discourage you from what you’re trying to do,” Kaine told Gilday, “To enable people to read broadly and then see the world through each others’ perspectives so that they can work better together as a unit to defend the nation.”