The tears flowed at a local car dealership Wednesday when a disabled veteran who was injured after being beaten by... 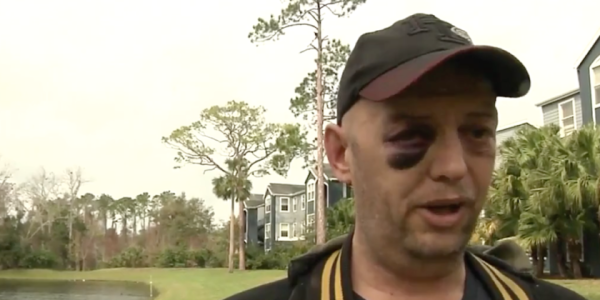 The tears flowed at a local car dealership Wednesday when a disabled veteran who was injured after being beaten by three animal abuse suspects was given a car.

Sitting in a wheelchair, his right eye covered from the beating he suffered last week, U.S. Navy veteran Garry Blough said that getting the 2012 Kia Forte from Daytona Kia-Mitsubishi would change his family's life. His family had no transportation.

“A simple appointment would take all day,” Blough said, tears welling up in his left eye. “To get on the bus to go to the VA for one of my appointments, or to take my daughter to one of her appointments, would take about four hours. Now we can go in just a couple of hours and we still have the rest of the morning.”

Even a trip to the grocery store for a loaf of bread or a gallon of milk was a monumental task for the family.

“There were only so many bags you could carry,” Blough said. “We were weighed down” with their 1-year-old daughter's stroller and Blough's wheelchair while trying to board buses.

Blough came to the attention of the auto dealership and of the nation last week when he tried to stop three people — Ryan Ponder, 23, Johnnie Beveritt, 18, and Alfred Jose Chico, 16 — from torturing a fresh water turtle in a pond at the apartment complex where the Bloughs live at 1717 Mason Ave.

The three suspects have been charged with felony animal cruelty/causing painful death and aggravated battery. Ponder and Beveritt remain in custody at the Volusia County Branch Jail. They are each being held on $15,000 bail. Jail records show the animal cruelty charge would be Ponder's second offense, though no court public court records are available for such a case.

Blough said his wife and daughter were outside their apartment walking when they saw the trio hurting the creature. They ran inside crying and told Blough.

The U.S. Navy veteran, injured in the Persian Gulf War in 1991, went outside and confronted the suspects. Blough said that when he turned around to tell his wife to call 9-1-1, he felt his attackers come up behind him and pummel him. Arrest reports state that the trio punched Blough, and once he crumpled to the ground they kicked his torso, face, head and legs. The beating badly injured Blough's right eye.

Before the incident, the war veteran was already disabled and unable to work. He suffers daily from seizures.

The day of the attack, Blough was taken to the hospital by ambulance, but when he was discharged the following day at 5:30 a.m., he had to walk home with his walker because he had no car. The 1.7-mile walk was excruciating because he had a fractured skull and facial bones. He also had internal injuries from being kicked and stomped.

When U.S. Marine veteran Paula Mongeon read in The Daytona Beach News-Journal that Blough had no transportation, she telephoned Daytona Kia-Mitsubishi. Mongeon is a longtime customer of the dealership.

“I knew they would help this guy, I just knew it,” Mongeon said.

“She said it would be great to help him out,” Flis said of his talk with Mongeon.

“No veteran should ever have to walk home from a hospital like that,” said Keith, who served in the U.S. Air Force.

When the Bloughs arrived at the dealership on Nova Road on Wednesday morning, their car was parked inside the showroom, a cadre of employees shining it up for the family. Dealership owner Richard Nisbett led the family to their waiting vehicle.

Blough was shaking and crying as he slowly rose from his wheelchair with his wife's help and climbed into the passenger side of the four-door Kia.

“These guys are a godsend, this is awesome,” Blough said as he looked inside the interior. “I needed help and they (the car dealership) reached out to me.”

Nisbett was choked up when he met with the family Wednesday morning.

“We're blessed as a company to be in this community and service the automobile industry for so long,” Nisbett said. “When we read the story, our heart went out.

“I just think how we can all look for ways to give people who may be less fortunate or have bad circumstances, you know, help,” he added, his eyes glistening.

Aside from the new wheels, Blough said he was thankful for the hundreds of people who donated to a GoFundMe page established by Jennifer Blough the day of the attack. As of Wednesday afternoon, 849 people had donated $31,267.

Blough said the money will go toward surgery for his damaged right eye. He said he was told the operation could cost between $35,000 and $50,000.

But first things first. Blough had to get a new driver's license, then he and his family returned later that afternoon to take home their car.