A long-planned, landmark study on the potential use of marijuana to treat post-traumatic stress in veterans has stalled again, this … Continued 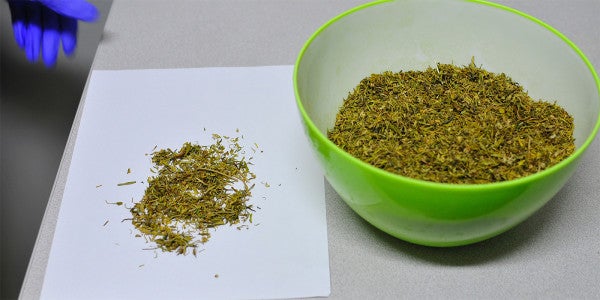 A long-planned, landmark study on the potential use of marijuana to treat post-traumatic stress in veterans has stalled again, this time after a debate arose over the unhip un-skunkiness of the government ganja grown for use in the experiment.

Johns Hopkins University, which had been tasked with registering local veterans to use the marijuana in clinical trials, is pulling out of the study, a move one partner attributed to negative publicity, the Washington Post reports.

The issue may have been some dank comments that partner, the California-based Multidisciplinary Association for Psychedelic Studies, made about the experiment’s grass being dirtweed.

“We waited 20 months to get going, and then we got this sub-optimal study drug.”

In January, Hopkins cleared a batch of pot for use in the experiment, the Post reports. That pot came from the same place all marijuana used in DEA- and FDA-approved experiments must come from: a special, government-run grow operation on the University of Mississippi campus.

MAPS, the organizer of the experiment, had long opposed the government’s monopoly on experimental pot — but Johns Hopkins’ stash was particularly long dregs and short on skunk, the Post reports. The weed set aside for use in the veterans’ experiment was low in THC, but high in mold and lead, MAPS argued.

Hopkins had no complaints about the shibby, so a MAPS researcher went public with her complaints last month, telling PBS reporters that the government weed “didn’t resemble cannabis. It didn’t smell like cannabis.”

Which it decidedly doesn’t, if you’re used to, say, the Sour Diesel or the OG Kush:

Nevertheless, the fuss over the gubmint sensimilla being muy malo may have convinced Hopkins that all this weed business was too seedy for them.

The experiment continues, with a dozen vets signed up to test the weed in Scottsdale, Ariz., and more volunteer drives are planned by researchers at the University of Pennsylvania and the University of Colorado.

Meantime, veterans continue to fight for increased research into medical and recreational marijuana. The American Legion’s membership has called for the de-scheduling of cannabis as an illegal drug and asked feds to work with private growers to provide “safe and efficient cannabis drug development research.”

And the Santa Cruz Veterans Alliance, a California grow operation, offered to donate some of its kush for the PTSD experiment. “Cannabis grown by veterans for veterans is how SCVA began,” the group’s spokesman, Seth Smith, told Task & Purpose. “Wouldn't it be amazing if the first federal study on the potential benefits of cannabis to treat PTSD symptoms in US veterans used safe, quality medicinal cannabis grown by veterans themselves?”