Wounded Veteran: ‘We Have To Protect Our Own And Honor The Fallen’

Stand Up for Heroes, hosted by the Bob Woodruff Foundation and the New York Comedy Festival, held its ninth show... 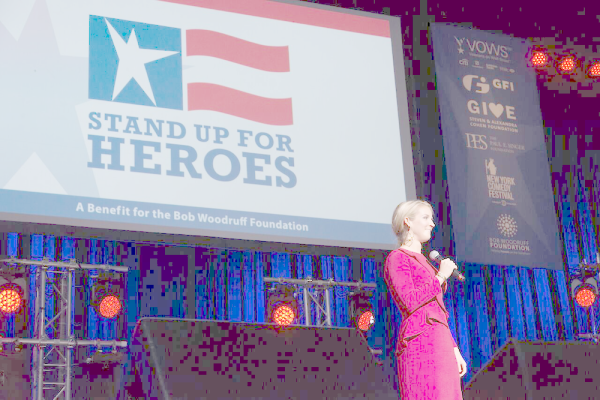 Stand Up for Heroes, hosted by the Bob Woodruff Foundation and the New York Comedy Festival, held its ninth show Nov. 10. The event, meant to honor wounded veterans, featured comedians like Ray Romano, John Oliver, and Jon Stewart, and topped off the night with a performance from Bruce Springsteen.

But of the veterans, all seated with their loved ones in the front rows at the Madison Square Garden theater, there was one who stood out — former Marine Kirstie Ennis. Ennis took the stage to tell the story of how she went from being a wounded warrior to a survivor to a 2016 Paralympic Games hopeful.

On June 23, 2012, Ennis, a helicopter door gunner, was involved in a helicopter accident that left her body and mind scarred.

After she said, “I endured 38 surgeries to put my face and body back together, suffered a traumatic brain injury, post-traumatic stress disorder, broken bones, and open wounds of all sorts.”

With two years of speech, cognitive, and physical therapy, as well as mental health care, she stood on the stage and told the crowd about the duties she and all other veterans still have to their brothers and sisters in service.

“Like everyone else in the front rows tonight, I do not want anyone’s pity. We want people to push and challenge us to be better in order to grasp a new sense of direction and purpose,” she said. “Even after we separate from the military, we still have duties to the men and women who served alongside us; we have to protect our own and honor our fallen.”

And that is what the Stand Up for Heroes event sought to do.

After he was injured by a roadside bomb while reporting in Iraq in 2006, Bob Woodruff started his foundation and organized the show, which raises funds to assist injured service members and their families.

Overall, this year’s event was the most successful in its near decade of fundraising, bringing in more than $6 million.

Watch Marine vet Kirstie Ennis talk about the Walk of Britain, a thousand-mile journey across Scotland, Wales and England.