Borat Stole My Valor And I Want It Back

Warning: This post may contain jokes. These past few months I’ve felt a little off, like an essential piece of... 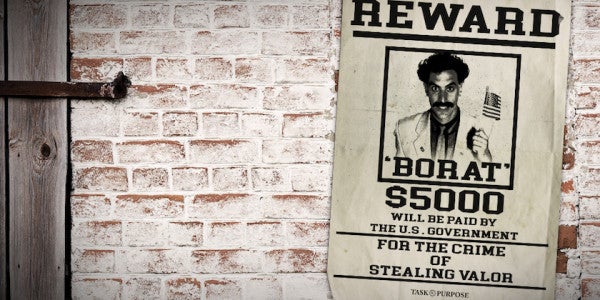 These past few months I’ve felt a little off, like an essential piece of me was missing, but it wasn’t until I turned on Twitter this morning that I realized what it was. Actor and professional rascal Sacha Baron Cohen — yes, the Borat guy — stole My Valor, right out from under my nose. I want it back. Or $5,000.

For nearly two decades, Cohen has been playing dress-up for money and laughs, often at the expense of American politicians, whom he lures into sham interviews under false pretenses. His latest victim: former Alaska governor Sarah Palin. And, by extension, me. And My Valor.

Last November, Palin accepted an invitation to appear on Cohen’s upcoming television series, Who Is America?, which Palin claimed in a recent Facebook post was pitched to her as a “legit opportunity” to “honor American vets.” Reader: It was not.

“For my interview, my daughter and I were asked to travel across the country where Cohen (I presume) had heavily disguised himself as a disabled US Veteran, fake wheelchair and all,” Palin wrote on her Facebook page on July 10. “Out of respect for what I was led to believe would be a thoughtful discussion with someone who had served in uniform, I sat through a long ‘interview’ full of Hollywoodism’s disrespect and sarcasm — but finally had enough and literally, physically removed my mic and walked out, much to Cohen’s chagrin.”

So, yes, it was Palin who got the last laugh! But that doesn’t exonerate Cohen of the crime of stealing My Valor.

Palin said it best in her Facebook post: “Mock politicians and innocent public personalities all you want, if that lets you sleep at night, but HOW DARE YOU mock those who have fought and served our country.”

Now, I know what some of you readers are thinking: We’ve been at war for 17 years, Adam. There is plenty of valor to go around. That’s a very good point and, honestly, I’m almost willing to concede it to you. But I won’t. Because I earned My Valor fair and square.

Also, the truth is, I’ve gone soft since leaving the Army. My bones don’t hold up like they used to. Plus, the thought of going even just one day without a Starbucks iced venti caramel latte sends shivers down my spine. I’m sorry, but Green Beans simply doesn’t do it for me anymore. And, please, don’t get me started on those little coffee packets they put in the MREs. It’s basically dehydrated rat feces. Yuck. Iraq and Afghanistan could have Valor growing on trees for all I care. I got My Valor already. I’m not going back.

Cohen has a list of film and television credits as long as a Texas sunrise, and a hot wife to boot. I, on the other hand, eat Hot Pockets for breakfast. Not the fancy kind. Just ham and cheese or plain pepperoni. So imagine how I felt when I logged on in the home office — my bathroom — this morning for some light reading and discovered that Sacha, a British person, had used My Valor to flimflam Palin, the American mother of an American combat veteran, and grandmother to the child of a Medal of Honor recipient.

This Valor I will defend.

Palin is now calling for Showtime to donate all the money Who Is America makes to a veterans charity. That’s a bit extreme. I’m a firm believer in justice, but the punishment must fit the crime. Also, we don’t know what “charity” all that money is actually going to go. What if it ended up in the pockets of some undeserving POG? Over my dead body!

Here’s a much better idea, Sacha: Just send me a check for $5,000. That’s a small price to pay for My Valor. I’m basically giving it away.

Palin, never one to pull a punch, got in one last jab before ending her Facebook tirade. “By the way, my daughter thinks you’re a piece of ****, Sacha,” the former vice-presidential candidate wrote. “Every honorable American Vet should feel the same.”

Well, Sacha, this American Vet remains on the fence. You can still do right by me and My Valor. So what’s it going to be? Will you a) return My Valor?; b) send me a check for $5,000?; or c) go to sleep tonight knowing that I think you’re a piece of “poop”?

The obvious choice is Option B. You’re not going to find a better deal than that, and, honestly, I really don’t even give a shit about My Valor anymore. Sure, it served me well when I first got out of the Army, back before my hair started falling out and my body still had muscles on it. Now, I’d practically have to drive to the bar in an M1 Abrams just to get a free shot of Jame-O and a thank-you-for-your-service.

So definitely go with Option B. I could really use the money. Pepperoni Hot Pockets are pickling my liver. Oh, and if for some reason you decided to include an autographed headshot with the check, I certainly wouldn’t hold it against you. I’m a huge fan, probably your biggest. In fact, just send over the headshot and we’ll call it even. Either way, My Valor is all yours. Really. Keep it. And let me know the next time you’re in New York. I’ll buy you a shot of Jame-O.