This article by Steven Mayne originally appeared on Military.com, the premier source of information for the military and veteran community. … Continued 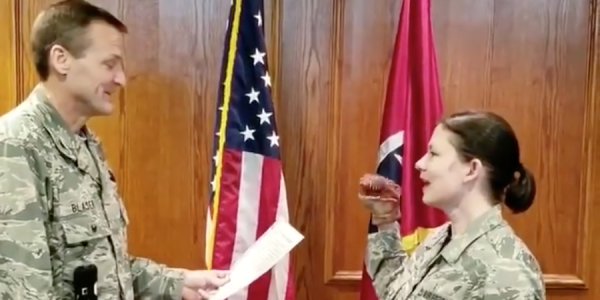 This article by Steven Mayne originally appeared on Military.com, the premier source of information for the military and veteran community.

I was at a memorial basketball tournament watching my son play when the message came to my page.

It was the now-infamous “dinosaur puppet reenlistment” video and the related post on a Facebook page, along with comments. The comments included those of the senior noncommissioned officer in the re-enlistment and the colonel who administered the oath.

The video had been posted by the SNCO along with the message, “Re-enlisting for the last time.”

Within the comments, someone had complained.

“Can you really call this a re-enlistment without both parties raising the right hand? I don't recall a dinosaur puppet being issued with the uniform. Joke or not, this is a direct reflection upon each of you and how others view the Guard in its entirety. True disappointment.”

The SNCO, later identified as Master Sgt. Robin Brown, replied to their comment with, “I used the dinosaur in the video posted to entertain my children. They don't always get to take part in, nor do they always understand the events. I'm sorry that's a disappointment to you. We can talk about it in person if you would like. I'm not a fan of keyboard warriors.”

This was followed by the colonel, who replied, “You are correct. I failed to raise my right hand. No excuse, I failed in my duties. I can only strive to do better in the future.”

There were more than 10 other comments. One was from someone who stated, “You actually worked today!”

The colonel replied, “Didn't want you to lose your sub-contractor for my arts and crafts projects.”

This all happened before I ever received the video or shared it.

A screencap from the infamous reenlistment video

The video started to get lots of views and comments. Pretty soon, I was being contacted by media asking to use the video.

Shortly thereafter, it went viral. Having worked command presentations for three-and-a-half years, I had seen my share of ceremonies. I double-checked the requirements for re-enlistments and shared them on the page. The most important information pertaining to them was that they were official ceremonies.

And the “commander/civilian directors ensure ceremonies are conducted in a dignified and professional manner, appropriate for an official act in a place that provides reverence to the oath being taken; safety of all participants should also be paramount,” according to regulations.

I also posted a conversation that took place within Tennessee National Guard Public Affairs in which someone stated, “This is not an official re-enlistment. The Airman in the video created it for her children.”

This would later turn out to be untrue.

William Jones, a spokesman for the joint public affairs office for the Tennessee National Guard, said that it was an official re-enlistment ceremony.

Randy Harris, director of Joint Public Affairs for the Tennessee National Guard, would later state, “I have no way of verifying who posted the other . I can only tell you what I posted. When I saw the combination of responses, I shut down all access to the account except .”

At no time did anyone from the Tennessee Air National Guard or Air National Guard comment on the post, as usually happens when a post goes viral. They also never contacted me or my page in any way. Honestly, I thought perhaps they would simply re-do the re-enlistment with minor administrative punishment and it would not be a big deal.

As the days went on, more media outlets contacted me and some media articles were written. I also received more messages, some of which showed the colonel conducting a previous re-enlistment in which he didn't raise his hand. In one photo, he had his hands in his pockets.

We shared the posts from the director and command chief master sergeant of the Air National Guard. More than three days after the video was posted, there was still no comment on the video or any contact from public affairs or the Guard concerning the video.

Ultimately, Brown was denied re-enlistment and removed from her position. The first sergeant who videotaped the ceremony was also removed from his post and given a reprimand. The colonel, Kevin “Bly” Blaser, was immediately retired as a lieutenant colonel.

When the punishment was posted on April 18th via Maj. Gen. Terry Haston, the Air National Guard adjutant general for Tennessee, I immediately felt like it was entirely too harsh. I had not seen such punishment or accountability in the Air Force for so long that, frankly, I was in shock.

In a service that reduced a chief master sergeant to a senior master sergeant and allowed him to retire after killing a child by DUI, and also retired a colonel before he started a jail sentence for rape, the punishments to me did not fit the offense in this case. I do not feel the actions taken by Haston were proportional to the infractions committed.

I honestly felt bad, despite Military Times running a poll that showed 78 percent of respondents stated the re-enlistment ceremony was “unacceptable, unprofessional and disrespectful” and the fact that there were 62,294 wow/sad/angry online responses to the video.

Having never been contacted by anyone from the Air Force about the video as of April 27, I can only give my opinion on what I believe. I have no idea of what went into their investigation. I do believe that social media, my page in particular, and the national media interest created a perfect storm and Haston responded.

The video very well might have simply been sent to another page, and it could have gone viral there. Being shared on my page probably caused it to go more viral than it might have done. And if I had the chance to do it over again, I would not have shared the video. You can quote me on that.

Related: We Veterans Get Upset About The Dumbest Crap »

I never know what will go viral or not, and lately there have been some viral posts that have attracted media from all over the country and sometimes the globe.

My hope is that Haston will reconsider the punishments handed down and that they will all be set aside, with the condition that a new ceremony take place, in which Brown is allowed to re-enlist and finish out her career in the great Tennessee Air National Guard.

I also believe the first sergeant who shot the video should be given his diamond back. Finally, I believe the colonel should be returned to service and allowed to continue his service to this great nation.

Before sending in this Op-Ed, I tried to reach out to the Air National Guard director but was unsuccessful.

I try to handle things at the lowest level when possible. When someone sends the page a complaint that must be addressed by command leadership, most times, you never see them on the page. That's because I work with the local chiefs and commanders to handle the situation at their level.

For the part I played in this, I truly am sorry. I'm unsure if there is any good that can be done here, but I ask the adjutant general to reconsider these actions now that the fog of war has lifted and the media interest has waned. We need to make this right.

Setting those punishments aside is, in my mind, not only the right thing to do, but the only thing to do.

Steven Mayne is a retired Air Force master sergeant who administers the unofficial Facebook page Air Force amn/nco/snco, which he started in 2013. This story originally appeared on Military.com