Why Discouraging Americans From Joining The Military Is Totally Wrong

Deadspin, which I read with more and greater devotion than I ever consumed The New York Times, just came out … Continued 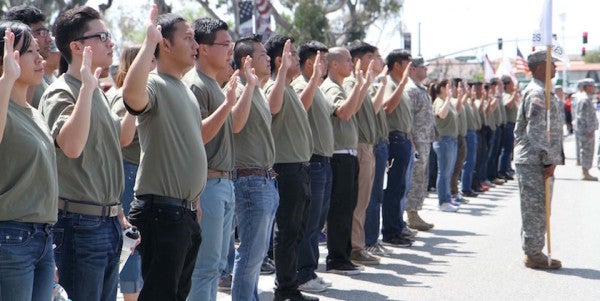 Deadspin, which I read with more and greater devotion than I ever consumed The New York Times, just came out with an interesting take on Jan. 31 titled “Don’t Join the Military.” It goes something like this: All the benefits of joining the military no longer outweigh the fact that Donald Trump is now in charge, so no one should join the military. With all due respect to the author, Hamilton Nolan, he got this one wrong.

“By joining the military, you place yourself at the service of the U.S. president. That’s the deal. You agree that, if ordered, you will go out and kill people you have never met, and risk being killed yourself. You do not get a say in these decisions. You do not get to examine the facts and decide whether the violence you are being asked to perpetrate or support is right or wrong. … We often speak of military service being performed ‘for your country,’ but it is more accurate to say it is being performed for the president’s wishes. When and where the president decides it is time for you to go, you go.”

The premise here seems to be that what the president says goes. That’s not quite right. Although Trump can order the military more or less where he pleases, Congress can exercise the power of the purse to stop him. It hasn't been overly willing to exercise that power in recent years, but it does often act as a deterrent to more reckless, larger scale activities — for instance, the invasion of Iraq, which was only done with a bipartisan authorization from Congress.

Related: Here’s Why you Shouldn’t join the military »

Nolan also ignores one key argument against his request for people to avoid military service, which at least one of the commenters on his thread pointed out: Not joining the military means you won’t have any say in what happens there.

The logic trail goes something like this: You, the empathetic, ethically minded citizen would prefer not to serve in the military because of Trump, or war, or any other ostensibly prudent reason to avoid service. In this way, the military becomes illogical, apathetic, and unethical, and one has nobody to blame but oneself.

However, the best reason you the smart, well-informed, careful, and thoughtful reader should join the military, and as soon as practically feasible: If we really do have an unpredictable autocrat at the helm, the last guard we have against fascism and totalitarianism is the military. In the event some terrifying illegal order arrives from the White House, the military could conceivably be in a position to disobey that order. Bad governments have fallen before under precisely those circumstances.

A president’s authority is predicated on people obeying his orders. He is not, essentially, a “powerful” figure, as, alone, a president would have difficulty opening a tight jar of jam (Trump especially: the small fingers). He has great authority, but should he abuse that authority, the military is the thing that would enforce the authority — and if it decides not to enforce that authority, Trump becomes an authoritarian “figure head” with no power.

All things being equal, Trump must strive to occupy a position where the military is loyal, which requires the issuance of ethically consistent orders that are in America’s best interests. It’s a beautiful if rather circular kind of logic, pioneered by none other than our first president, George Washington, who stated that “When we assumed the Soldier, we did not lay aside the Citizen.” It has applied to every president’s understanding of the military since, not just Trump’s — you might say that the system of citizen-soldiers is designed to check rather than embolden unscrupulous ambition. So, again, the surest way to guard ourselves from dicks is to serve as citizens in the U.S. military.

Finally, while Nolan concludes his request by offering that people serve in the community, I’d counter that these days, military service is community service of the highest order. All of the volunteer opportunities Nolan proposes are great, but are also routinely accomplished in and by the armed forces. Furthermore, a lack of community volunteers does not have the same cultural or strategic ramifications as a lack of middle-class soldiers, sergeants, or officers.

In a social milieu characterized by cynicism and lack of trust in public institutions, the military is one of the few organizations that still enjoys a relatively stable degree of faith and confidence. That makes it a good place to invest one’s time and energy — and not a system to abandon lightly. If people take Nolan’s advice and bail on the military, our way of life will be threatened and endangered in a way he never intended, and in a way no president could affect or achieve on his own.