Last December, for the first time in decades, no U.S. Navy aircraft carriers were deployed anywhere in the world. The … Continued 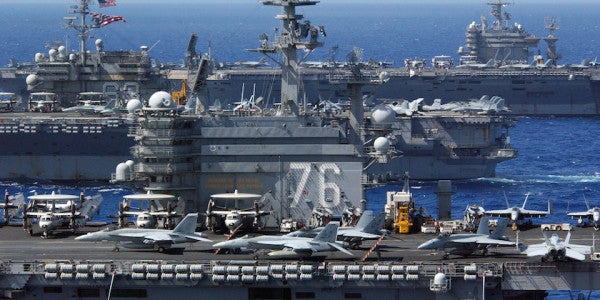 Last December, for the first time in decades, no U.S. Navy aircraft carriers were deployed anywhere in the world. The Navy says to expect that to happen more often. Some newsoutlets implied this was an indication of U.S. naval decline.

The U.S. fleet does have problems, but not having enough carriers to cycle through U.S. Central Command is far from the biggest one. Aircraft readiness in general and the complete abomination that is the Littoral Combat Ship/Frigate program are far more pressing problems for the Navy. In fact, this shortfall in carriers could end up being a net positive, forcing the Navy to evaluate other options to provide presence that will be better suited to the threats of the future.

For decades now, the Navy has been consumed by its need to answer the question, as President Bill Clinton succinctly put it, “Where is the nearest carrier?” It has so consumed the Navy for so long that the service has stopped wondering if it is still the right question. It is not.

The Navy seems to believe that its end goal is to continuously keep carriers on station. That’s just a means. The end is being able to make people and things explode when the nation’s leadership needs them to.

The Navy needs to focus on ends, not means.

After Pearl Harbor, America was most concerned about the battleships lost in that attack. While the battle resulted in a major loss of men and capital ships, it became apparent that things weren’t as bad as initially thought. The carriers USS Enterprise, USS Lexington, and USS Saratoga weren’t at Pearl Harbor. As the war unfolded, it became clear that the mantle of the great capital ship had shifted from the battleship to the aircraft carrier. While battleships continued to provide heroic service bombarding Japanese redoubts during the Pacific Campaign, they were no longer the decisive arm in naval battles.

Over the past 70 years, the carrier has become today’s battleship — a shore bombardment weapon. It’s powerful, but no longer decisive. Carriers only hold a place in our consciousness because they haven’t faced the crucible of naval combat against a worthy adversary since the end of World War II.

The advantage a carrier has over an airfield is that it can move. Its disadvantage is that it can be sunk. That’s becoming more likely as the weaponry employed by potential adversaries becomes more and more capable. China, for example, has anti-ship ballistic missiles with ranges of at least 900 and possibly up to 2,500 miles. Against that, the most common aircraft aboard ship, the F/A-18E/F has an unrefueled combat radius of about 500 nautical miles and the F-35C has a best-case range of 615. They both can be refueled inflight, but the tankers are themselves vulnerable.

If the carrier-killer ballistic missiles weren’t enough, the carrier battle group will face progressively more deadly threats if it is to close within striking range. If it faced China, that would mean an impressive barrage of cruise missiles, launched from the shore, aircraft, surface ships, and submarines.

The carrier’s escorts, such as Arleigh Burke destroyers, defending the carrier would fend those off for a time, but facing a serious, technologically capable foe on its home turf, any carrier will eventually be targeted by so many weapons that it will succumb. The number of nations able to do this is only going to increase.

Against any mid-level to major power, the question will be raised — what policy objective is worth the loss of a carrier and its crew of 6,000? Such a loss would be over twice the 13-year death toll of Afghanistan in one day. There’s nothing short of an existential threat to the territory of the United States itself that would justify that risk in the eyes of the public or politicians.

So let’s be honest and admit that the carrier is really around so that the United States can drop JDAMs on insurgents, terrorists, and third-rate powers without worrying about basing rights. That’s worthwhile, but is it worth $13 billion a ship? That’s three space-age Zumwalt destroyers, or seven Flight III Arleigh Burke destroyers. Those add up to a lot of striking power and presence themselves. A carrier is an iconic symbol of American presence, but it it it worth subordinating the rest of the Navy to maintain something that is becoming more symbolic with each passing year? An armada of missile-capable ships off a coast makes a powerful statement as well, not to mention more distributed and potentially more survivable firepower.

The first of class littoral combat ships USS Freedom (LCS 1), left, and USS Independence (LCS 2), maneuver together during an exercise off the coast of Southern California. The littoral combat ship is a fast, agile, networked surface combatant designed to operate in the near-shore environment, while capable of open-ocean tasking, and win against 21st-century coastal threats such as submarines, mines, and swarming small craft.U.S. Navy photo by Lt. Jan Shultis.

Thinking strictly in terms of carrier mission, beating the hell out of insurgents can be much more effectively accomplished by a combination of unmanned systems for persistent observation while rotary-wing assets and light attack aircraft, like the Super Tucano, provide support to ground troops. Counter-insurgency operations can generally be supported by land-based aircraft in close proximity to the fight. If a counterinsurgency can’t be supported by aircraft on the deck in that country, then you’re no longer dealing with a counterinsurgency, but a regional conflict, and will likely need more than just carrier-based air anyway.

Punitive strikes against weak states and the occasional mission putting warheads on a high-value target’s forehead can be done by unmanned systems and cruise missiles delivered by surface ships and submarines. The Air Force will still have plenty of strike assets to throw against the problem as well. Land-based aircraft, like the F-15E Strike Eagle, not to mention bombers like the B-2 and B-52, inherently bring a lot more to the party than naval aircraft. Their likely greater distance from targets compared to a carrier will reduce their potential sortie rate. However, that can be largely mitigated by shifting the military’s portfolio of assets towards missile shooters and land-based aircraft, as well as by giving civilian leaders a long-overdue dose of expectations management.

Not to be ignored in those scenarios are the LHA and LHD class amphibious ships. They carry AV-8B Harrier jets now, but will soon carry F-35Bs. That’s significant firepower, especially when combined with their onboard AH-1Zs and UH-1Ys — as well as the planned, armed MV-22B and armed unmanned systems. The Navy owns nine of these ships. It should commit to more. While just as vulnerable as big-decks against a well-armed adversary, they’re perfectly capable of throwing ordnance against foes Like ISIS (who lack anti-ship capabilities), and are far more versatile with a much lower price tag.

Finally, there’s the existential conflict scenario. The LHAs and LHDs wouldn’t last long in that, but neither would an aircraft carrier. Such a fight would depend on many things, namely nuclear weapons and strategic airpower, but the aircraft carrier as it exists today would be nothing but a target.

Today’s carriers will continue to be the most efficient way to ferry the latest version of the F/A-18 to the crisis du jour for a while longer. That’s good news in the short term. The United States has time to adjust. The money we’ve spent on carriers so far is not yet wasted money. They can serve out their programmed lifespans harassing terrorists and punishing assorted third world dictators at the president’s whim.

But the longer we hold onto the outdated notion of the aircraft carrier as the premier symbol of national power and prestige, the further we fall behind in adjusting to emerging threats. Every dollar spent on additional carriers is money that could be better spent increasing the capabilities of the rest of the Navy’s fleet. If we stay unduly tied to a particular means — maintaining a constant carrier presence — it will eventually mean losing the end — victory in war.