Why Are So Many Marines Dying Far From The Battlefields?

Nineteen. That’s how many Marines the U.S. armed forces have lost in the past 30 days alone. And none of … Continued 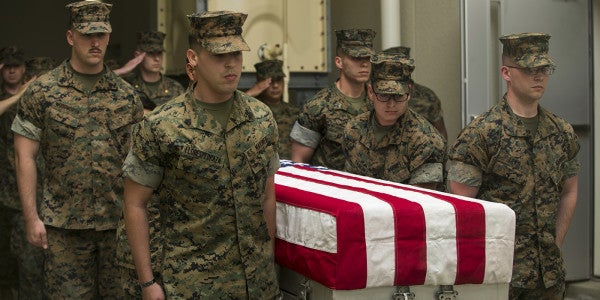 Nineteen. That’s how many Marines the U.S. armed forces have lost in the past 30 days alone. And none of them were felled by combat.

Lance Cpl. Cody J. Haley, 20, was the latest, killed by a falling tree on Camp Pendleton on August 4. He preceded a lieutenant, a corporal, and a private killed in an MV-22 crash in the Pacific off Australia on August 5. They followed 15 Marines and a sailor, mostly special operators, killed when their C-130 broke apart over Mississippi on a clear Tuesday in mid-July.

On their own, these accidents are tragic, but they also punctuate an alarming trend: Marines in July and August died in non-hostile situations at a frequency that’s nearly 10 times the rate of non-hostile deaths in Afghanistan since the war started there. It’s five times higher than the non-hostile death rate for all U.S. service members in Operation Iraqi Freedom — including training and transport mishaps in Kuwait and other staging areas for the war effort.

You could chalk it up to one bad month. A tree limb striking an exercising Marine is a freak occurrence. Aviation mishaps are increasingly frequent and can easily drive up non-combat fatalities in a single incident or two.

But the Corps, which did not respond to Task & Purpose’s request for comment, has had more than just a bad couple of weeks. Its aviation troubles are well-known, from the Harrier crash that led III MEF’s commander to announce “a temporary operational pause” last year to the collision of two Sea Stallions that killed 12 Marines in early 2016 to the Black Hawk that went down with its entire crew in 2015, decimating the same Marine Raider unit that lost so many personnel in last month’s C-130 crash. The Marines’ aircraft mishap rate was twice as high as the Navy’s in 2016; in fact, the Corps’ mishap rate has doubled since 2012.

Then there are the ground-training mishaps, like the death of Lance Corporal Austin J. Ruiz, 19, of Naples, Florida, who was killed in January in a live-fire training exercise at Twentynine Palms. Or the seven Marines killed in a Nevada mortar-training exercise gone awry in 2014. Which was a year before 22 Marines on an exercise in Hawaii literally had the oxygen pulled out of their lungs when the halon system triggered on their amphibious assault vehicle. (They were treated for minor injuries and survived.)

And of course, there is the legendarily challenging recruit training depot at Parris Island, where a Muslim-American recruit died of a fall under mysterious circumstances last year, and his death exposed a culture of hazing that’s grown worse, not better, in recent years. Despite the Corps’ efforts to tackle gratuitous abuse, the apparently self-inflicted injuries continue. Last October, a recruit jumped from a building and put himself in a coma, where he remains today. He was followed by another roof-jumper, a recruit who was hospitalized after his fall last month. (One could easily add to these incidents the Corps’ long struggles with suicide in the ranks, as well.)

It’s not unheard of for recruits to die in boot camp — nor is it unheard of for their deaths to expose deeper problems in the institutions that recruited them. Training for combat can be as hazardous as combat — although the “perceived sense of urgency” that Marines demand of themselves can, itself, become a killer. And military aviation is inherently dangerous — but should it be this dangerous?

Marines die. They stand rough and ready to do serious damage to those who would harm us. But that’s no excuse for complacency when young men and women in their 20s and 30s pledge their industry, their honor, their bodies to the service… and get ground up at ridiculous rates in non-combat operations. It’s a break of trust with the victims and their survivors — not just in the blood family, but in the service family, too.

“The difficult we do immediately,” elite troops like to say. “The impossible takes a little longer.” It may be difficult to make training for hell inherently safe. But it’s impossible to believe the Corps is content with so many non-combat deaths. It’s no use fighting for right and freedom, as the song goes, if you can’t keep your honor clean. To do that, a service that excels at breaking shit needs to do a better job of keeping its volunteers in one piece.