Tom Ward hasn’t stood in formation in more than three decades, but the Marine veteran lives with a degenerative disease... 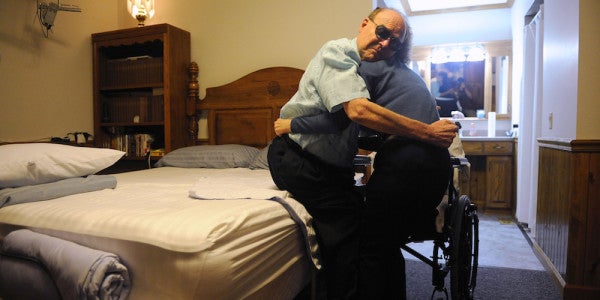 Tom Ward hasn’t stood in formation in more than three decades, but the Marine veteran lives with a degenerative disease the Department of Veterans Affairs has agreed is connected to his service so many years ago. Joe Swoboda completed three tours in Iraq and he, too, lives with health issues that impact his mental and physical well-being. Besides both being veterans, Joe and Tom have another thing in common: dedicated caregivers in their wives Melanie and Mary. But for all of Joe and Tom’s commonalities, the fact that each man served in different wars mean that Melanie and Mary don’t have the same benefits offered to them as veteran caregivers.

Last week, senators on Capitol Hill heard a handful of the 5.5 million stories of these “hidden heroes.” As military family members ourselves, we were honored to be joined by Melanie and Joe, Mary and Tom, and Wanda and Sam Ickes in testifying before the Senate Special Committee on Aging. Each of us urged lawmakers to take action on legislation that would greatly improve the lives of military and veteran caregivers — no matter when a veteran served. These individuals are critical to the long-term well-being of wounded warriors, but too often it’s at the cost of their own health due to to the stress and isolation of caregiving.

Currently, only 20% of military and veteran caregivers are eligible for benefits through the VA. That’s because when Congress first established the VA Caregiver Program, it only made benefits available to caregivers of post-9/11 veterans. Yet, the 4.4 million caregivers of pre-9/11 veterans face the same challenges as they deal with the effects of decades-old post-traumatic stress disorder, exposure to Agent Orange, proximity to burn pits, or traumatic brain injuries that are now causing early onset dementia — all with almost no assistance from the VA.

The Elizabeth Dole Foundation was established in 2012 to empower military caregivers by advocating for increased support, raising awareness and recognizing their enormous contributions to our nation. We hope the senators’ leadership will inspire their colleagues to ensure passage of the Military and Veteran Caregiver Services Improvement Act before year’s end.

We also made a second ask of the senators: to fund critical research. This week, the RAND Corporation, in partnership with the Elizabeth Dole Foundation, released a research blueprint that must be pursued to successfully meet caregivers’ long-term needs five, 10, or 20 years out. Such research is urgent to ensure that our collective work on behalf of these hidden heroes is effective and sustainable.

If you ask any wounded warriors how we can honor their service and sacrifice, they are likely to say, “Help my caregiver, because that will help me.” We know from our previous research with RAND that the most significant factor in a wounded warrior’s recovery or improvement is a well-supported caregiver. No one sees and feels the love and labor a caregiver offers more than the veteran for whom they care. To the rest of us, a military caregiver’s heroism goes unseen, but it should not and cannot go unrecognized and under resourced. We call on Congress to stand with the heroes behind the heroes — our nation’s military and veteran caregivers.