Sorry, Politico, But Social Media And Trump Aren’t Responsible For Politicizing The Troops

Politico has just published an article arguing that a growing number of U.S. service members are getting political on social … Continued 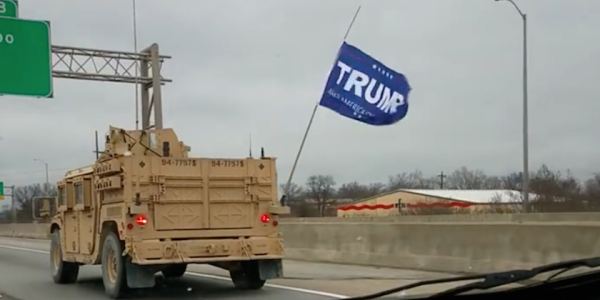 Politico has just published an article arguing that a growing number of U.S. service members are getting political on social media, citing a survey by the National Defense University that polled more than 500 West Point cadets and active-duty officers. Now, Politico says, there are fears that the military’s reputation as a nonpartisan institution is under threat, thus “prompting calls for commanders up and down the ranks to reemphasize how impartiality is a major reason why the military regularly polls as the most respected institution in the country.” And in a not-so-subtle way, the article’s author raises the possibility of a link between the problem and President Trump, writing, “[The warnings] come amid accusations that President Donald Trump is recklessly politicizing the military by claiming, with scant evidence, that the troops voted for him in overwhelming numbers.”

While it’s convenient to blame Trump’s divisive brand of politics for the growing politicization of the military, or everything for that matter, it can hardly be used to explain this particular phenomenon — that is, if you’re using the National Defense University survey as the basis of your argument. Because here’s the thing: The survey was conducted in December 2015, almost six months before Trump became the presumptive Republican nominee. Of course, Trump’s politicizing effect on the military could’ve been well underway back then, too. But the author fails to mention the date of the survey, thus leadingthe reader to logically conclude that what we’re dealing with here is an urgent problem that Trump could be making worse. In the last 48 hours, the story has been picked up by a number of other media outlets, including Military Times, which also didn’t mention the date of the survey.

As for the survey itself, 75% of the cadets and officers who responded said they’ve witnessed their military friends repost or share links to political articles or promote politically charged viewpoints posted by others on social media, according to Politico. That’s certainly something worth noting, but there’s another glaring problem with the thesis of the Politico article (titled “Twitter and Facebook are politicizing the military”): The survey is the first of its kind. So then how can we say that, as the author writes, “social media’s angry partisan divides are seeping into the U.S. military, raising fears that the tradition of political neutrality in the armed services is eroding”? We can’t — unless we’re either comparing the survey’s findings to some fantastical notion of how service members conducted themselves on social media before the 2016 presidential election, or talking about a “seeping” process that began long ago.

I’m going to go out on a limb here and say that as long as social media has existed, service members have been using it to talk about politics. To imply that until now service members were refraining from posting about politics suggests to me that the author wasn’t Facebook friends with anyone in the military during the 2008 and 2012 election cycles. Had a similar survey been conducted then, I suspect the findings would’ve revealed what I observed every time I scrolled through my Facebook feed, which was that service members were hardly less vocal about politics on social media than anyone else. In 2012, a Marine sergeant was discharged from the Corps for criticizing President Obama on Facebook. Soon after, the Army published a press release warning service members to avoid posting endorsements of political candidates or ideologies on the internet without clarifying that their views do not imply an official endorsement by the military. If there’s one key observation to be gleaned from the December 2015 survey, it’s that those warnings went largely unheeded.

There’s no disputing the fact that our country has become more deeply divided along political and cultural lines since the start of the 2016 election. And the military is certainly not immune to our country’s societal ills. But service members aren’t just now waking up to the power of the internet as a platform where they can express their political views to the masses. It’s just that now the public is paying attention. That in itself should give commanders a greater sense of urgency in tackling the problem, if they are indeed concerned that, as Col. Heidi Urben, who conducted the study, writes, “such behavior threatens to erode the trust in which the public holds the military.”

Meanwhile, let’s be sure to give credit where credit is due. Service members were politicized long before Facebook, Twitter, and Trump came along. How could they not be? These are men and women who’ve signed up to risk their lives at the direction of the commander-in-chief. If we’re going to sound the alarm because they’re expressing their political views on social media, we should also acknowledge that those sounding the alarm are guilty of letting social media’s “angry partisan divides” seep into their ranks, too. Politico misused a study that predates the Trump presidency to make him seem responsible for something he’s not. The military isn’t the only institution with a nonpartisan reputation that’s being eroded by its members’ overt political leanings. Journalists should take note.