"I consider myself a moderate... But to the far right, I’m a PC libtard who wants to emasculate the military. And to the far left, I’m a misogynist relic." 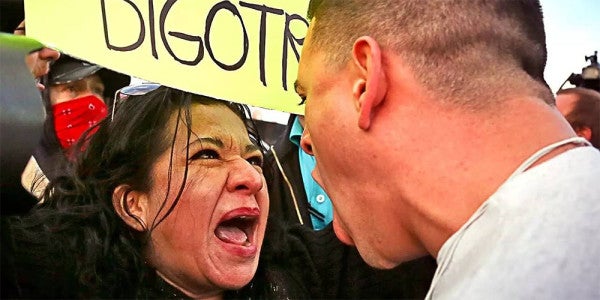 In academic terms, I’m probably what is called “center left.” I voted for McCain in 2008 but for Obama in 2012. Before that, I had voted nearly straight-ticket Republican for almost 20 years. But I couldn’t abide the GOP leadership’s move into tinfoil-hat manufacturing after Obama was elected, and have voted mostly Democratic since then.

But even though that might make me somewhat progressive by military standards, I’m not what is commonly called “woke.”

For example: I believe that transgender people shouldn’t be excluded from serving just for being who they are. You be you, dude (or dudette, el duderino, or whatever non-binary expression you choose). It’s all good. But while we shouldn’t exclude people from serving just because they don’t fit traditional gender norms, I do believe there are practical problems in regards to things like billeting and special medical care in expeditionary environments that have to be addressed unemotionally.

Similarly, I believe the military has made massive strides in the full integration of women in a short period of time, and the services should be largely saluted for their efforts, not condemned. In spite of the military’s continuing issues with sexual harassment and assault, it has outperformed most other American institutions in the grand arc of history towards justice. Some criticism is appropriate, because things should be better, but we still need to recognize how much has already been done and is being done by military leadership right now, and pump the outrage brakes just a bit.

With views like these, I consider myself a moderate: a pragmatist who tried to do his best by his people while in the service, and by writing about the service once out of it. But to the far right, I’m a PC libtard who wants to emasculate the military. And to the far left, I’m a misogynist relic.

The military isn’t immune to the same divisions that have divided the civilian world into left- and right-wing. People draw up their imaginary orthodoxies for their political viewpoints and then persecute heretics accordingly. It’s not enough to be 50% or even 90% aligned with one side or the other. Any sign of apostasy, no matter how slight, is grounds for excommunication from the tribe.

The right tends to meet disagreement with anger, claiming that anyone who questions its dogmas is weak and un-American. Many web pages that profess to be for veterans just devolve into right-wing politics, not even counting the ones that arejust disgusting. Many push a “kill ‘em all” attitude in military affairs, and anyone who disagrees is a “POG boot fuck.” On the other side, the far left tends to meet disagreement with condescension, and is often smug and self-righteous, conflating disagreement on social issues with moral inferiority. These approaches do nothing but make extremists feel better about themselves. They sure don’t help persuade anyone outside the fold.

What both sides forget is that the military is a pretty diverse group, both demographically andpolitically. Adhering to orthodoxy only drives away potential allies. The extremes of both camps drive the middle-dwellers to one side or the other–there is a strong backfire effect. Sometimes, the harder you push someone, the more they push back.

The values we share in the military and veteran communities are far more important than the issues we disagree on.

To the staunch conservative, is it really appropriate to say that “liberals are anti-American” and the like? I guarantee that there’s a liberal in your unit who’s done all the same deployments and training you’ve done who directly disproves that statement. So why are you still saying it? Just because someone has a different view than you of what America should be doesn’t mean they hate America.

To the liberals who are quick to cry “racism” or “sexism” at the slightest infraction by a comrade, perhaps you too can tread a little more lightly. That fellow servicemember likely thinks he has been serving honorably side-by-side with people of varying backgrounds for years, so why are you busting his ass for not using the PC nomenclature du jour? To be clear, I’m talking about social justice policing, not harassment, assault, or slurs — which are always contrary to our shared values.

Especially for the woke fringe, some sense of realism and patience is necessary. Things don’t change overnight, especially in regards to social issues. Even former President Obama publicly opposed gay marriage until at least 2010, so let’s back up the outrage train whenever someone isn’t 100% in accordance with the latest orthodoxy. People can and will change, but they are more likely to get to the right destination when met with reason, not snark.

People being political jerks, shaming each other endlessly, is a nationwide problem today. As servicemembers and veterans, we all share a love of country, and the vast majority of us also want to serve in an environment where everyone is given a fair shot at success. Let’s start giving each other the benefit of the doubt, and not let our community fall victim to the same dysfunctions roiling the civilian world.