Ronald Reagan — conservative icon, emblematic commander in chief, cowboy — popularized what he called “the Eleventh Commandment” through his... 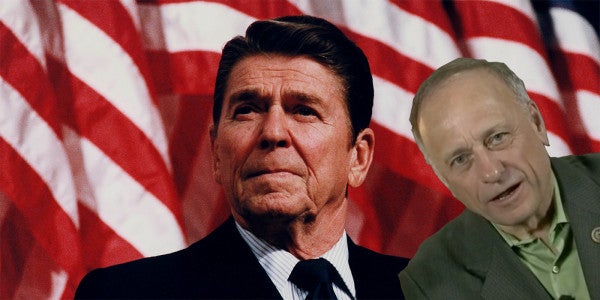 Ronald Reagan — conservative icon, emblematic commander in chief, cowboy — popularized what he called “the Eleventh Commandment” through his political career: “Thou shalt not speak ill of any fellow Republican.”

Fortunately, Reagan died before Republican Rep. Steve King of Iowa got into politics.

Since joining Congress in 2003, King has assiduously set himself apart from the House’s other conservative old rural white guys by being a completely insane blood-and-soil kinda dude. A dude who’s so dead set against immigration that he (falsely) blamed Reagan’s 1986 “amnesty” bill for creating 15 million new voters who put Barack Obama in office. A dude who’s in the headlines this morning for playing nice with European white nationalists and railing against nonwhite babies on Twitter.

What would happen if Reagan, the mythical Republican lodestone, and King, the current Republican headline-getter, got together to chat about immigration and American greatness? No need to wonder. Here’s a stab at that conversation, with quotes from the men themselves (plus some of King’s biggest contemporary fans):

“I, in my own mind, have always thought of America as a place in the divine scheme of things that was set aside as a promised land. It was set here and the price of admission was very simple: the means of selection was very simple as to how this land should be populated. Any place in the world and any person from those places; any person with the courage, with the desire to tear up their roots, to strive for freedom, to attempt and dare to live in a strange and foreign place, to travel halfway across the world was welcome here.”

“Freedom is never more than one generation away from extinction. We didn’t pass it on to our children in the bloodstream.”

Wilders understands that culture and demographics are our destiny. We can't restore our civilization with somebody else's babies. https://t.co/4nxLipafWO

“I've spoken of the shining city all my political life. … And how stands the city on this winter night? … After 200 years, two centuries, she still stands strong and true to the granite ridge, and her glow has held no matter what storm. And she's still a beacon, still a magnet for all who must have freedom, for all the pilgrims from all the lost places who are hurtling through the darkness, toward home.”

“The poet called Miss Liberty's torch 'the lamp beside the golden door.' Well, that was the entrance to America, and it still is. And now you really know why we're here tonight. The glistening hope of that lamp is still ours. Every promise, every opportunity, is still golden in this land. And through that golden door our children can walk into tomorrow with the knowledge that no one can be denied the promise that is America. Her heart is full; her torch is still golden, her future bright. She has arms big enough to comfort and strong enough to support, for the strength in her arms is the strength of her people.”

How could Reagan not be beaming about the future of America right now?