"The military owes it to itself to find outlets for exceptional individuals to contribute. Priebus owes it to the country to be honest with himself and find a more productive outlet to serve" 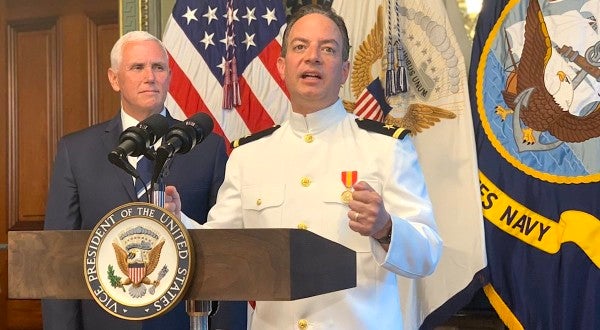 Former White House Chief of Staff and Republican Party Chairman Reince Priebus was recently sworn in as an ensign in the Naval Reserve at the age of 47.

There are undoubtedly many who will dismiss this as a stunt. The U.S. military is consistently one of the most trusted institutions in America. As a career politico, Priebus could certainly use the halo effect of military service going forward. Based on his history, there's little doubt he'll pursue another high office, whether elected or appointed.

There's certainly some level of self-interest involved. For all the bluster vets have about selfless service, almost everyone who's joined had at least some amount of selfishness involved. Whether it's college money, bonus money, learning a skill, or learning self-discipline, everyone joins looking to get something out of it.

Very few, if any, service members are solely doing it out of love of country and expecting nothing in return. Priebus, to the extent he may be doing this for selfish reasons, is not much different than anyone else joining the military — it's just that instead of looking to learn diesel engine repair to get a job at a truck stop, he's building a service history to help his future run for governor or senator.

Just because he's playing at a higher level is no reason to hate on him.

As much as I may disagree with the administration he babysat for, I have no doubt that Priebus is a patriotic American with a willingness to serve. I can't fault him for volunteering, but if his goal is truly to serve, then both the military and Priebus could use a rudder steer.

Priebus serving as an ensign, an entry-level job for new college graduates, is something of a joke. He was the chairman of the Republican National Committee, an organization that raises well over $100 million a year. He was the White House Chief of Staff in an administration that by many accounts resembles a viper pit. Suffice it to say, he's overqualified to be a Navy human resources officer for one drill a month.

In many ways, someone of his experience is better suited to be recruited as a high-level civilian, e.g. in the Senior Executive Service (SES), or even as a direct commission officer at a more senior level. Unscrewing unit drill rosters is a little beneath his skillset.

To be honest, someone of Priebus's level serving as an ensign is likely to be more of a burden than a help to those he serves alongside. For starters, he's likely older than his commanding officer, but that's not unprecedented. Sometimes a mustang officer is older than his boss.

More important is the power imbalance inherent between him and his superiors. Priebus has just come from two jobs where he could literally tell governors and senators to perform physiologically impossible acts on themselves. More than likely he will be in another high-level position before long. Does anyone really think his immediate superior, a lieutenant or lieutenant commander, or even his captain, will be able to sit down and counsel Ensign Priebus on what his needs to do to get his professional house in order? If he doesn't make drill weekend because of a fundraiser at Mar-a-Lago, does anyone really think there will be any consequences, even by the standards of the reserves?

In a lot of ways, it's better to fill entry-level positions with entry-level people. Does anyone really think Priebus will put in 20 years and finish his career at age 67? Someone in his 20s with a lifetime of personal and professional growth is a better fill. There is indeed such a thing as being overqualified.

Priebus can serve in any number of capacities. The military owes it to itself to find outlets for exceptional individuals to contribute. Priebus owes it to the country to be honest with himself and find a more productive outlet to serve.