On Nov. 10, 2017 I was in an induced coma and not expected to live. My disease was endocarditis. This … Continued 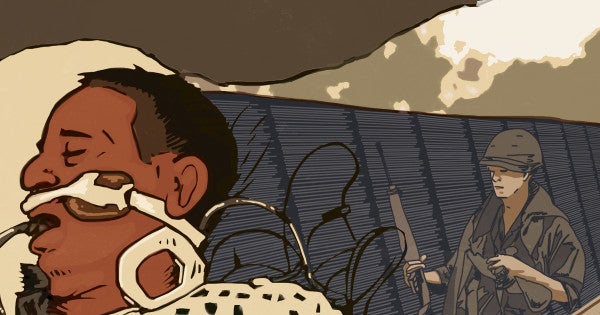 My disease was endocarditis. This was my third go-round with endocarditis since 2006, now involving an infected heart valve. This, however, looked like the end. My heart valve was inoperable. No surgeon would even try given the likelihood of my death on the operating table. My system was too weak to survive open heart surgery to replace the valve.

Family and friends came to pay their last respects. I was on life support. My hands were often tied to the bed since I had been pulling out the needles in my arms. Meanwhile, the hospital staff kept on a television 24 hours a day, perhaps giving some company and stimulation.

Amazingly I later woke up, and within six months was playing golf. I suffered no brain damage. I am lucky. I have escaped death several times, including when wounded fighting in Vietnam. Jimmy Buffett made a song played for me hundreds of times by my wife ending in the words, “Hang in there, Jan.”

But a year ago I needed a Christmas miracle.

What do you think happens in a coma? Some folks remember nothing. Others have dreams about awful things.

While on life support, I had wild escapades in my mind of traveling the world, stopping a takeover of Oregon, saving a vice president, and helping Judge Judy restore churches in Jerusalem. This was a wild tapestry of strange and poignant dreams.

My insane coma journey began in Oregon where I arrived by aircraft extremely ill.

Upon arriving, Spike Lee had just announced the creation of a new nation. Oregon, British Columbia and New Zealand would be part of a confederation. This socialist paradise had free everything from a well-off government. They would save millions by abolishing their military with the US and Canadian Armed forces providing military protection instead. The entire government would be funded by sale of Pinto Noir Wine at rock bottom prices.

Since I had some sort of status as founder of the nation’s Vietnam Veterans Memorial, I appeared on television denouncing the idea. “We learned in 1861 through 1865 that states must remain in the union. We are a nation of laws and we cannot have celebrities setting up private kingdoms for their entertainment.”

I was persuasive on TV and got national attention. My journey was beginning.

This sudden notoriety brought about a meeting with President Trump. He agreed with me and set up a meeting in the White House. Trump had an idea for a Commemorative Plaque honoring Native Americans which would retail for $299 with a profit of nearly $200 per plaque. We discussed marketing and his ideas on the profits which would go back to the tribes.

Though he was thoughtful and sharp, I said, “Mr. President, if we sell 50,000 plaques there would be $10 million in profits. So that is five bucks a piece for two million Indians.”

Trump responded, “let's not rush into this. This will create blowback with the media. It screams fake news.” The odd aspect of this was that it was found, after my meeting, that the Trump Empire also included leasing luxury house trailers which were appearing on major Indian reservations. This revelation dulled my enthusiasm for the President’s Native American Plaque idea.

From the White House I was somehow transported to Tel Aviv.

I was deathly ill in a Four Seasons Hotel where flirtatious and charming Russian women gave me sponge baths twice a day. My stay was short, but led to another adventure in the Middle East.

Judge Judy was on the Board of an Orthodox Christian group which provided repairs to Christian Churches in Israel. The people managing the money were very small with tiny heads and long noses. Judy was very serious and began pressing me hard, “I want you on this Board, Jan. I need people with status. You also need to help me with something. The small Christians have a gambling problem among their leaders. Some money is missing.”

Judge Judy was flattering and had turned on the charm. I assured her I would look at the financial reports, but felt this would not be a good use of my time.

The time horizon now slipped back to 2012. In my Coma Journey, I was at the Vietnam Veterans Memorial tackling a man reaching for a pistol as Vice President Joe Biden took the stage. The Secret Service had been to our offices earlier to meet with an employee convinced that a Narco from Waldorf, Maryland would attempt an attack during the historic ceremony.

I was the MC. The Narco was obese and having problems fitting his finger through the trigger guard of a small revolver. I knocked him down and let the Secret Service do the handcuffing. Biden was impressed at how I leapt from the stage to subdue the bad guy.

“Jan, that was the bravest act I have ever witnessed,” he said. I laughed and said, “Mr. Vice President, I got him from behind when his ring finger was stuck in his gun. He was trying to shoot at you, not me!”

Jan in Vietnamjan in hospital

Next I arrived at a secret hospital near Camp David. It was hidden in a shopping mall in case of casualties from terrorists attacking the VIP's at the presidential retreat. In my coma dream I was doing some skiing.

As the day wound down I drove to the secret hospital. I was offered a room, but was required to put on the same exact restraints which were on my arms at the Annapolis hospital. I slipped a small Swiss Army knife into the restraints. I cut through the restraints and escaped. In my coma journey I was fighting a male nurse who was putting me in restraints. That was also literally happening at the hospital. Reality and the dreams sometimes coincided.

I ended up at the new Hyatt Hospice in Washington which was a place for the wealthy to die in style. While the person was dying his friends would gather. There was piano music and cocktails; a festive atmosphere. I was visiting a dying South African Trapeze Artist who was involved with a wealthy friend in Virginia. The Hyatt Hospice was a pleasant atmosphere with small, but lively crowds saying their goodbyes to rich Americans over Martinis.

Meanwhile my medical condition was not improving.

The decision was being made on when to end life support. The consensus was that it be done before Christmas. An attractive Indian doctor, Kambayanda Chengappa, would not give up. She was determined to find the right antibiotics. Friends were praying in the room, seemingly to no avail.

But then I opened my eyes and, being on life support, saluted a doctor to communicate. He asked me to move my left foot. Then my right foot. I was unable to walk or even stand and still groggy from the drug-induced coma.

In Jan. 2018 I was transferred to John Hopkins Hospital and learned to walk again. By the end of the month I stopped using a cane or walker in the house. In June I was playing golf and walking a couple of miles daily. I was preparing for open heart surgery, but the staph bacteria was no longer in my mitral valve thanks to retired Army Special Forces Col. John Fenzel. He noted that the drink of Vikings was Mead made with honey which could attack bacteria.

It seemed to work.

My military training and experiences as a rifleman in Vietnam gave me an edge.

My best friend is my wife, Becky, who took a real chance when she married me in 1974. Her stress level was high as she watched me with little hope of recovery. Senator Hagel and others kept her spirits up. My funeral would have been nicely done in Arlington.

Now I have a new lease on life, planning ski trips and vacations. I am thankful to God, who perhaps decided to bring me back from the dead to complete another mission or two. It wasn’t like he could exactly ignore all those who were praying for me.

That would be rude.

Jan Scruggs is a former Army infantryman and Purple Heart recipient best known for leading the effort to build the Vietnam Veterans Memorial Wall in Washington D.C. He has a law degree from the University of Maryland, and has written numerous articles on subjects ranging from the American Civil War to post-traumatic stress disorder.