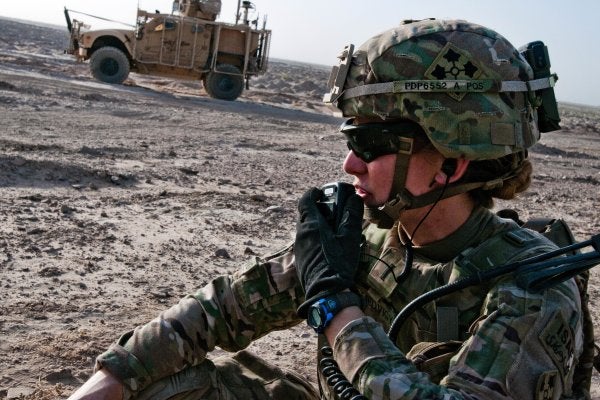 Following Trump's inauguration, some supporters of ground combat integration assumed he would quickly move to reinstate a ban on women in jobs like the infantry. When this did not happen, advocates breathed a collective sigh of relief, and hundreds of qualified women charted a course in history by entering the newly opened occupational fields.

So earlier this week when the Wall Street Journal published an editorial against women in ground combat by conservative political commentator Heather Mac Donald, the inclination of many ground combat integration supporters was to dismiss it outright. But given Trump's proclivity to make knee jerk policy decisions in response to falling approval ratings and the court's tradition of deference to the military when it comes to policies affecting good order and discipline, it would be unwise to assume the 2016 lifting of the ban on women in ground combat is a done deal.

To be clear, Mac Donald's article is not grounded in sound data or representative of any service's stated position except that of the Marine Corps. Although Mac Donald is correct in writing that female Marine participation has been limited in newly opened fields like the infantry, this is less due to physiology and job standards than the service's overt and covert cultural barriers to inclusion. Had Mac Donald included Army statistics about the number of women who have successfully competed for ground combat jobs since 2016 and compared it to the number of confirmed violations of good order and discipline directly attributable to integration, her position would have been untenable.

Because of her errors and omissions, ground combat integration advocates expressed frustration with the editorial on social media. Naval officer Andrea Goldstein wrote on Twitter, “not sharing/RT the article going around today written by a white woman who's made a career of using pseudoscience to argue that drawing from 100% of the population doesn't make us stronger. Why? That op/ed falls apart if **fact checked**.”

All of this is true, but never before in our history have facts been less relevant when it comes to military policy decisions.

Trump's penchant for using social media to announce uncoordinated military policy changes, including a ban on transgender people and the withdrawal of U.S. troops from Syria and Afghanistan, has caused considerable consternation in the Pentagon.

Further, criminal investigations against Trump and his campaign and the longest government shutdown in history have cost him considerable political capital. The timing of Mac Donald's editorial is no accident, and she represents the views of many senior leaders who have long complained that combat integration is a form of social engineering in the military. A reinstatement of the ban on women in ground combat could present a way for the Commander in Chief to win back the support of his military leaders and boost his approval ratings while also appealing to his conservative base.

Some experts argue if Trump were to reinstate the ban, it would quickly be challenged in court. And while transgender rights groups have had some legal success in reversing Trump's ban against their service, the courts traditionally defer to military leaders when it comes to policies related to good order and discipline. This means that there aren't many legal checks and balances to counteract Trump's power as Commander in Chief.

And since it is highly unlikely that the next Secretary of Defense will be supportive of women in ground combat, we can assume they would fall in line with a decision to reinstate the ban. The Service Women's Action Network has had a pending legal case on the issue against the Department of Defense since 2012 with no resolution.

If the government can argue to a conservative judge — even as artlessly as Mac Donald does in her opinion piece — that the integration of women in combat units negatively impacts good order and discipline, the courts may defer to the military and rule against SWAN. Clearly, the judiciary does not offer a guaranteed means of defeating the reinstatement of a ban.

Fighting for change year after year can be draining, and understandably, many advocates of women in ground combat are ready to move on. But as Margaret Thatcher once said, “You may have to fight a battle more than once to win it.” Rather than write off Heather Mac Donald's opinion piece as irrelevant, we would be wise to consider her argument in the broader context of the president's ongoing legal challenges and his falling approval ratings.

Kate Germano is a 20-year veteran of the Marine Corps. She is a vocal advocate for an end to gender bias and lowered expectations for female performance and conduct. The views expressed here are those of the author and do not necessarily represent the views of the U.S. government or Task & Purpose.

SEE ALSO: Why I Changed My Mind About Women In Combat Arms Units