Millions of modern veterans have returned home from the complexities of war in Iraq and Afghanistan with incredible experiences and... 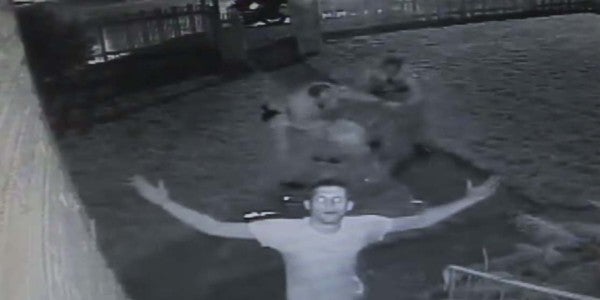 Millions of modern veterans have returned home from the complexities of war in Iraq and Afghanistan with incredible experiences and skills. For some veterans, particularly those in specialties like paratroopers, those skills include the ability to lay down a beating when the moment calls for it.

Such was the case earlier this winter in Seattle, Washington, where an Army veteran, Andrew Myers, confronted a would-be burglar who tried to get physical. Myers beats the intruder up and holds him down until cops arrive, while capturing the whole thing on home surveillance footage. Myers then took the footage and posted it to YouTube set to music.

Set to a fun reggae beat, we can see the robber approach the residence when the timestamp on the video reads 7:46 p.m. He glances at the upstairs windows before brazenly checking to see if the basement entrance is locked, then heads around the back.

Related: Marine vet who took down armed robber says he followed his Instincts »

Within less than a minute, the homeowner, Myers, enters the frame. He makes sure the basement door is locked and that the intruder can’t get in if he gets passed him. Then, Myers goes hunting.

The camera view then switches to another entrance of the home. We see the robber shuffling about in a hooded sweatshirt with his hands in his pockets. He climbs the stairs toward the entrance when Myers comes speeding around the corner. Myers climbs the same stairs with a sense of purpose and, for 30 agonizing seconds, no one can be seen.

Myers told KIRO TV in Seattle that during the encounter he approached the man and said, “What’s up?”

“I live here,” the man claimed, according to Myers.

“You definitely do not live here,” Myers replied. When the robber asked who Myers was, he responded, “I do live here, buddy.”

At that point, Myers claims the man attempted to throw a punch, a big one. He described him stepping back and reeling up for a haymaker. Myers grabbed him.

Then, Myers and the robber fight each other down the stairs, which is when the two men re-enter the video. As soon as they reach the landing, Myers lands a devastating right hook and lands on top of the guy. From then on, the robber is just fighting to hang on to second place in the two-man fight. The man sprawls and bucks and grabs a little bit, but each time, the barefoot ex-paratrooper meets him with a punch. Eventually, a woman, identified by KIRO TV as Myers’ girlfriend, Megan Pierowicz, comes out on the phone, presumably with 911.

Within moments, the cops arrive, and after struggling with the gate a bit, they take control of the situation. Myers immediately stands and looks at the security camera with his arms out in disbelief. The now-handcuffed robber seems pretty out of it after all of those blows to the head.

But Myers had seen the robber before. The man had broken into Myers’ basement just days before, and had spent the night there. Myers and his girlfriend found clothes and cigarette butts left in the basement the next day and checked the surveillance video.

Army vet Andrew Myers shows off his knuckles after an encounter with a would-be burglar. “I don’t think that’s even from him, I think I missed and hit the sidewalk once,” Myers told KIRO TV in Seattle.

But it’s what Myers did after the encounter that’s worth noting. He posted the video to YouTube with the title “Mr. Wrong House – ‘Robber meets Paratrooper,’” and encouraged anyone who shared it to use the hashtag #MrWrongHouse. He then set up a website — mrwronghouse.com — to share his message. Myers is courting donations for Paws and Stripes, a nonprofit that trains rescued and sheltered dogs to become service dogs for veterans with post-traumatic stress disorder or traumatic brain injuries.

His dog can be seen briefly in the KIRO TV interview, running out on the porch at the moment when Myers is describing his initial confrontation with the burglar, likely sensing the distress in his voice.

“We should want to help as many veterans as possible fight their personal demons and keep that many more ‘wrong houses’ around for bad guys to walk into at night,” Myers writes on his website. “The world could use more veterans still alive and home behind those doors.”

“My service dog has helped me in ways I cannot explain with PTSD and I may not still be here without him,” Myers says on his website. “Many veterans would still be alive to defend their homes if they would have had a dog like mine.”