A movie meant to mock the daily drudgery of office drones also captured the lives of everyone from admin clerks to grunts to pilots. 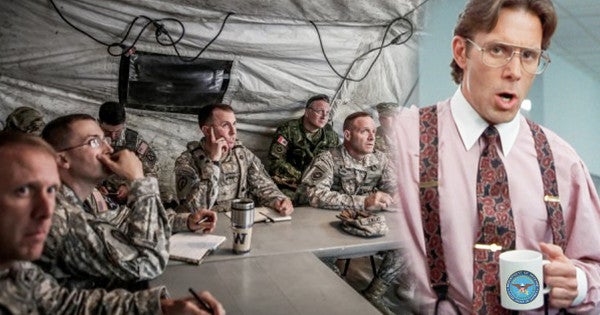 On February 19, 1999, the world changed forever. Office Space came out. It wasn’t a box office sensation. It only made $12 million. But the VHS (the what?), DVD, and all the different streaming versions of it would change workplaces forever.

Oddly enough, one of the workplaces that Office Space perfectly captures is the military. Whether it’s on a movie screen in a base theater or a laptop in troop berthing, service members have seen themselves in Office Space for 20 years now.

A movie meant to mock the daily drudgery of office drones also captured the lives of everyone from admin clerks to grunts to pilots.

“I’m gonna need you to go ahead and come in tomorrow. So if you could be here at around….nine, that’d be great.”

Lumbergh is every bad officer. Peter is every Joe who just wants to be left alone. Weekend work isn’t uncommon in the military, but all too often, the people who are most devoted to their work are the ones who end up being asked to do just a little bit more.

If you just leave early on Friday and don’t answer your phone all day Saturday, they can’t get you. While the second part of that tactic is a lot harder to pull off in 2019 than in 1999, life finds a way. Just leave an extra cover and set of keys on your desk like a burst of chaff and execute evasive maneuvers.

“PC load letter! What the fuck does that mean?”

Office Space’s “flair” is the Rosetta Stone of the military. It explains so much. If the minimum isn’t good enough, then why is it the minimum? If 28 minutes wasn’t an adequate time to run three miles, it wouldn’t be allowed. Oddly, while everyone in a leadership position in the military insists on exceeding the minimum in PT, no one gets in trouble for only reading the bare minimum number of books.

Of course, the other use of the word “flair” is by Marines when they talk about their Army and Air Force brethren. Nothing amuses Marines more than the bedazzled uniforms of their sister services. A ribbon for finishing boot camp? A badge for grenade throwing? Seriously? What kind of participation trophy, third-world dictator uniform nonsense is this?

Anyone in the military, particularly in staff jobs, sympathizes with having multiple bosses. You’re ADCON to your unit back home, but OPCON to this new unit in the field, but you’re operating in a third unit’s battlespace. And for some reason the unit that’s supposed to be supporting you keeps asking for things like they’re in charge.

The military always talks about unity of command, but even though one guy may be in charge, a dozen others act like they are, and a dozen others pretend that their personal pet rocks are so important that everyone else should feed them too.

“Didn’t you read the order?” The military lives on orders, regulations, and messages. Then they get revised and those who actually pay attention to such things lord it over those who don’t. Strangely enough, the Internet has only made things worse, since instead of just checking the unit’s message binder (yes, that used to be a thing), now you have to follow your unit on Facebook and Instagram to keep up-to-date.

“I DM’ed you that the time for the formation changed.”

“Our high school guidance counselor used to ask us what you would do if you had a million dollars, didn’t have to work. And invariably whatever you’d say that was supposed to be your career…”

The first answer to that question is,”Two chicks at the same time, man.” Because that’s every military man’s dream. The second answer is “definitely NOT joining the military.” Everyone talks about having higher purposes and serving their country and all the rest, but in reality, everyone joined for vaguely self-centered reasons. Whether it was because Bumfuck Egypt, Iowa didn’t offer any jobs without hair nets or because you weren’t athletic enough for a sports scholarship nor smart enough for an academic scholarship, the military is full of people who aren’t there for the best reasons.

Oddly enough, even though most people didn’t join for the right reasons, once they’re in the military, they usually find the right reasons. If it’s not for country, it’s for comrades, and that’s certainly good enough.

“This isn’t so bad, huh? Making bucks, getting exercise, working outside…Fucking A.”

Exactly. The military can suck a lot of the time. Then again, who else will pay you to shoot guns, workout, be outside, and hang out with your friends all day? No one else. That’s who.