Review: Tactical Ops Brewing’s Recon Red is a competent red ale, but is that all? 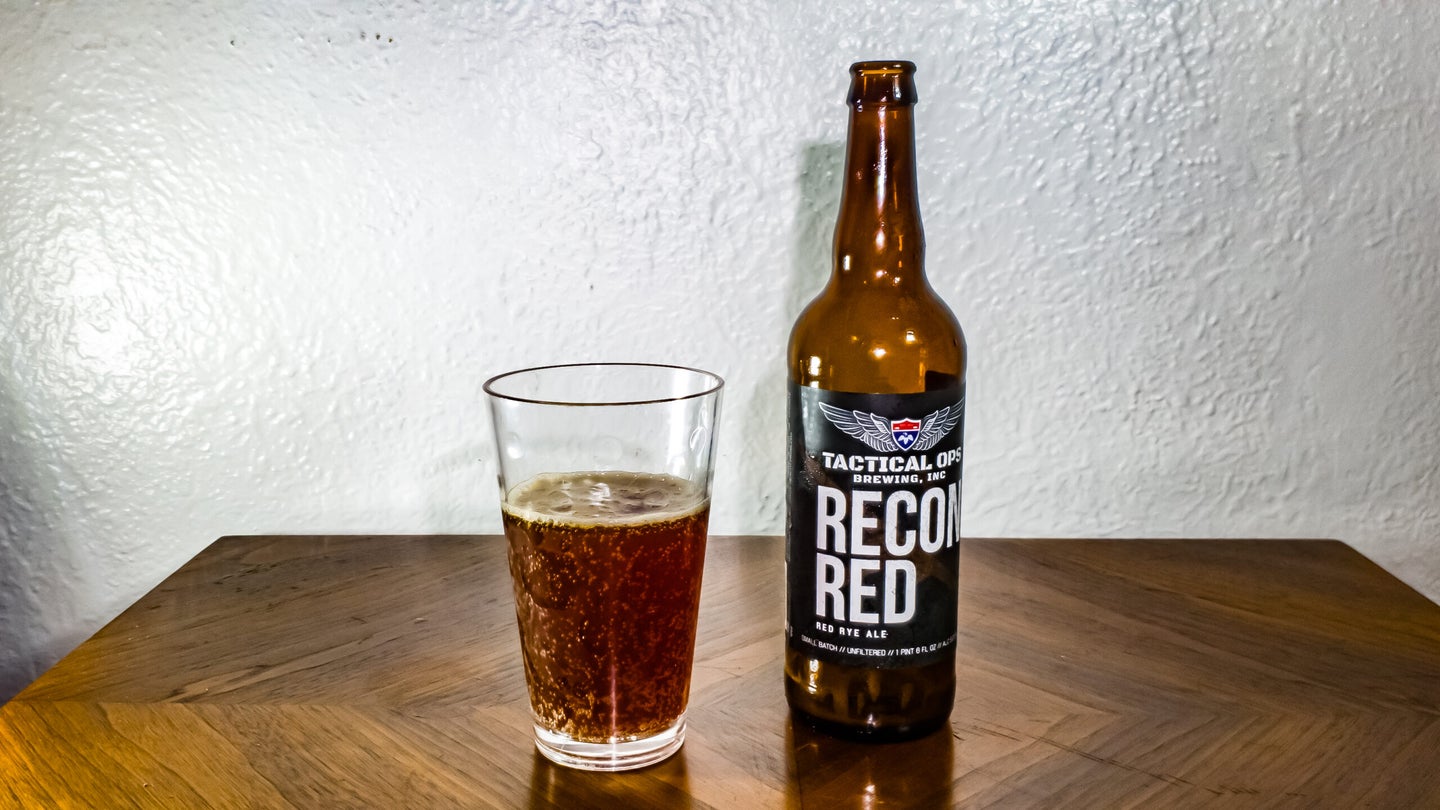 I’ll be real with you: my last outing as a beer reviewer was an unmitigated disaster. My review of Armed Forces Brewing Company’s ‘Special Hops’ IPA was intended to be a joke article, but somehow it morphed into a critique of veteran-focused marketing and lifestyle branding. Since then, I’ve tried to return to my usual routine of writing exhaustive articles about knives (mostly) until my editor saw a photo of Fresno, California-based Tactical Ops Brewing’s ‘Recon Red’ red rye ale featured on r/JustBootThings and dropped another beer tasker on me. So now here I am, sampling more military-themed beer so you don’t have to.

Initially, finding details on Tactical Ops Brewing was difficult: when I Googled the product, the company’s website was outdated and contained multiple broken links. However, this was rectified when I emailed the company and received a same-day email from Carlos Tovar, an infantry Marine who served with 3/1 Lima between 2003 and 2007 and the current manager of the brewery. According to Tovar, Tactical Ops started in 2014 as “a very small brewery out of a 600 sq. ft. office space. Now we have grown to a 4000 sq. ft. building over the last few years and [are] looking to expand again.” With two locations in Fresno and Clovis, California, 90 percent of the company’s employees are former military, “a mixture of Marines, Army and Navy,” he said.

This kind of expansion is hard to do unless you’re putting out a good product, so I entered this review with a sense of optimism. Let’s see how the Tactical Ops Brewing’s ‘Recon Red’ red rye ale holds up to expectations.

I ordered this beer from California to Virginia through the Bevv service, which shipped it via UPS. It took a pretty long time for them to get it to me, almost 2 weeks, and much of that was just waiting for them to get it shipped. I don’t think this was the fault of Tactical Ops Brewing at all, and is likely just the time it takes for Bevv to get ahold of the beer from them, and then mail it, but be advised in case you intend on using Bevv to order some beer that’s only available in another state.

The beer I ordered came in a large bomber-sized bottle, although it’s also available in regular pint cans (the format that I personally recommend.) The bottle is brown glass, which is pretty standard, and it’s got the regular non-twist bottle cap you’d expect from a beer bottle. The label is super simple, your typical adhesive paper with the requisite beer name, ABV info, Surgeon General’s warning, and company logo. The label indicates that this is a red rye ale, and shows that it’s brewed by Tactical Ops Brewing in Fresno, which is a nice touch, again, considering my last outing. A funny touch to me was that the stats on the bottom of the front of the label are separated by double forward slashes as if they’re breaking up a classification header. It really gives me “BEER//RYE//SECRET//NOFORN” vibes, and that made me chuckle.

The logo is one of those things that confuses me but doesn’t really detract from the overall vibe of the beer. For some reason, the company decided that a winged sterile interstate sign was their visual signal of choice. The signet that they use makes more sense as seen on their cans, a stylized “T” in a hexagon with an additional chevron below it, which not only conveys a very military vibe but also reminds me of a rank chevron from some fictional sci-fi military, which I appreciate. I just feel like the two styles of logo clash, and the former doesn’t look terribly military.

Pouring the beer into a glass reveals a reddish color that befits the red ale moniker, with a decent head. The beer is slightly cloudy as it’s unfiltered, and the bomber bottle fills the entirety of my commemorative Coors beer stein, which subjectively just sells the whole “ale” angle. In terms of smell, it’s very malty and, well, beery. Tovar described it as a “gateway to craft beer” and that’s very believable. In every way, the presentation of this beer is inoffensive and accessible, especially if you’ve ever had something like Sam Adams.

I drank it. of course. I got two bottles of the Recon Red ale and drank one straight out of the bottle and one out of a glass. Some people say that it affects the flavor to drink from a glass, but at this level of beer, I wouldn’t worry about it. Drink it from the can or bottle.

The flavor overall is like the appearance and presentation of the beer: completely inoffensive and accessible. Creamy, smooth, and lightly spiced, it goes down easy. There’s no overwhelming alcohol flavor or excessive malt flavor that’s common with lower-end beer, and it’s much more pleasant than mass-market red ales like Samuel Adams. Think of it as Samuel Adams in a suit. It’s a lot nicer, but it’s not so much that it’s completely unrecognizable. A very positive aspect of this beer is that it’s something you can enjoy in quantity without getting plastered, which is not something you can say for things like Imperial Porters, Barleywines, and Belgian Tripels. Those have their place, but this is a beer that you can hand to anyone and they’ll enjoy it, and like Tovar said, it’s a great way to get someone into craft beer gradually and easily.

What we like about the Tactical Ops Brewing Recon Red

This is a very easy beer to like. It goes down easily and is very similar to more popular options so that it’s very easy to go from mass-market beer to the craft market. If you’re the sort of person who drinks beer to have a beer, it works in that regard, in that it’s not going to jump out at you with any sort of strong or excessive flavors. If you’re looking for something with complexity, it’s there, you just have to look (or taste) for it. In terms of price, if you’re local to the brewery, it’s about what you might expect to pay for a quality beer.

To be honest, $16 is a lot of money to pay for a 4-pack. The bottles I got were $5.50 apiece, and shipping was literally double the price of the beer and change. After a certain point, you have to ask yourself if it’s worth it to spend the money to get this shipped out. Even a 4-pack of cans is on the high side of where I’d want to be for something like this. This is a very good standard beer, but telling someone that they have to spend $16 on a 4-pack of something that won’t taste shockingly different to an unrefined palate is a challenge. I personally prefer something more exotic in flavor, especially at this price point.

This is a great example of my larger view of veteran-owned or military-themed businesses, which is to encourage people to view them as producers of an actual good or service, and not as a business owned by a veteran or that has branding that appeals to veterans. Tactical Ops Brewing makes good beer, and this is one of them. If you’re someone who lives near Fresno, this is definitely something that you might want to check out, especially if you’re in their target audience, but if you’re across the country like me, I’d urge you to check out local breweries in your area instead. Tactical Ops is not the only company producing a solid red ale.

One thing worth noting: while Tactical Ops Brewing is a veteran-operated business and one that brands its product with military-themed names, the company is very low-key about it. Tovar was very cordial in his email, and in interviews with other news sites, he seems very down-to-earth. Apart from the name of the company itself, and maybe naming your beer ‘Recon Red,’ the other names are much less on-the-nose. I appreciate that I don’t feel like I’m getting smacked in the face with the branding, and or like I’m being sold back my patriotism in any way.

My next nearest comparison to this beer was Pale Fire Red Molly Irish Ale, and that’s a solid choice as well. Recon Red was much better overall, but in terms of access, Red Molly is more available in my area. This is the dilemma that I’m talking about with regard to who this beer is for, and if it’s more worthwhile to buy something else rather than this product. This is before I get into locally available red ales, like Adventure Brewing Fred Red, which is right down the road from me.

Q: How much does Tactical Ops Brewing Recon Red cost?

A: According to Wikipedia, rye beer refers to any beer in which rye (generally malted) is substituted for some portion of the barley. Their flavor profiles can vary greatly from variation to variation, and the constant is that most rye ales have a fairly low alcohol content.

A: Okay, a bit of background, I got this one from checking Google search results related to Tactical Ops Brewing. Basically, in 2019, Tactical Ops Brewing printed “Epstein didn’t kill himself” on the bottom of their cans in a then-current meme and controversial marketing move.