‘I Closed My Eyes, And When I Did, I Saw My Pistol’: The Warax On Suicide 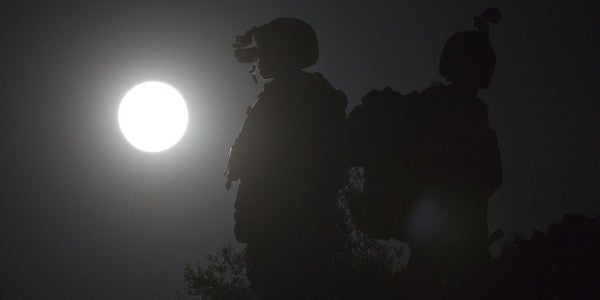 Editor’s note: May is Mental Health Awareness Month, and the West Point history department last week asked veterans on Twitter for their advice on how to “positively add to the discussion about PTSD.” One vet who responded with a personal story was The Warax, the anonymous, Seuss-inspired former Marine whose cantankerous takes on post-military life and politics have earned him a big social media following. “The first time I thought about killing myself the idea was easy to dismiss,” The Warax’s story began. What followed was a gripping but very recognizable lesson on how depression and suicidal tendencies can set in as a veteran’s career sunsets through no fault of his own. We asked the Warax to share his story here in an essay, and he agreed.

Until the explosion, what scared me most was the thought of being killed, but what is most terrifying about war is that you can be destroyed without dying. It happens gradually; like getting older, you cannot see it happening to you. Each day I woke up, looked in the mirror and I recognized the person looking back. Until one day, I did not. I would stare at myself in the mirror trying to see what was broken, but I couldn’t see what was wrong. I saw my same eyes, same face. Same arms, same legs. But I was not me, and that realization was terrifying.

The man I was before the IED strike was smart, confident and decisive. The man I became, as I saw myself then, was not. Most of the time I couldn’t remember where I was or what I was supposed to be doing. I would stare at my Marines, unable to remember their names. When people spoke to me I misunderstood them, and when it came time to respond I was unable to organize my racing thoughts. I would clutch at words as they flashed through my mind, only to see them slip by like water and evaporate before I could open my mouth. As days turned to weeks and then months without improvement, I felt myself being hollowed out by despair and anger.

The first time I thought about suicide, it was easy to dismiss. The idea first popped into my mind as I listened to a Navy doctor explain to me that I would be medically retired, that I would not be a Marine anymore.

Until that moment, I believed that the doctors would be able to fix whatever was wrong with me. Through the confusion, pain, hate, and sadness, I was holding on to the belief that I would return to the Fleet eventually. When the doctor told me I would not get better, that “life is now about making the most of what you have left,” I felt as though the floor gave way beneath me.

I listened and understood that all my plans, my career, my friends — and most importantly, my Marines — would be taken from me. I saw that what I would get in exchange for what I loved most was pain, confusion, and that smoldering hatred I felt hollowing me out inside since Afghanistan. In the doctor’s office I closed my eyes, and when I did, I saw my pistol.

The thing about suicide is that the first time you think of it, it’s scary. The thought of dying is unwelcome and terrifying. And because of that it was easy for me to push aside. Like anything else though, the more time you spend with something new the more familiar it becomes.

Eventually suicide was on my mind all the time. And I already knew how I would kill myself, after all. I would shoot myself in the head with my pistol, of course, which I reasoned was an appropriate way for a professional soldier to die. Every morning as I walked to the Metro from my apartment, I imagined taking my pistol out of its lock box, inserting the magazine, chambering a round, and blowing my brains out. Soon this looped in my head, like a short gif, no matter what I was doing. Before long I welcomed suicide as a release from the pain, fear, and hatred that dominated my life.

I am still here though, and I will tell you why. I am alive today because when I was a young Marine, my platoon sergeant took the time to talk to us.

Gunny carried himself like someone who grew up fighting, and he had the scars to show for it. He squinted and smirked like Robert DeNiro, and when he spoke he did so with a heavy Boston accent. Gunny was the most military man I’ve ever known, and frankly, he scared the hell out of me.

But once a week, Gunny sat on the floor of our berthing area and talked to us about life, and we listened, half-circled around him. There was one conversation in particular this man had with us, on his own time, that helped save my life. That day, Gunny talked about his own experience with the psychological cost of war, explaining that mental health is as important as physical health. As we sat around him, Gunny told us that thinking of suicide is not a sign of weakness, but rather a sign of a medical emergency.

“Thinking of suicide is a sign of a medical emergency.” I remembered those words, years later, and in the darkness they saved me. Because of that conversation I realized I was sick and that I had to ask for help. I did. And I am here. Thank you, Gunny.

It is easy for soldiers (and civilians) who have experienced war to forget that life is beautiful. It is easy to forget because the horror of war chips away at who we are gradually, and like getting older, we do not notice that it is happening. But life is beautiful and life is full of love and hope. And each of us deserves to be a part of that, no matter what we’ve done or seen. Remember that.