The “come and take it” mantra of gun-rights activists has taken on new meaning thanks to an Austin resident's recent... 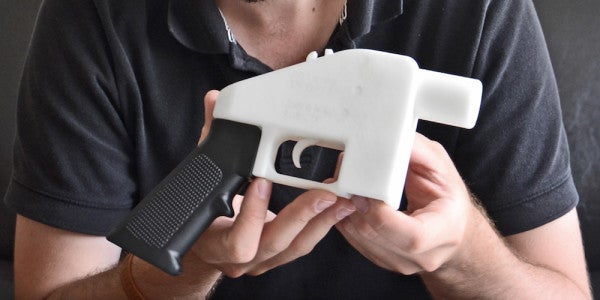 The “come and take it” mantra of gun-rights activists has taken on new meaning thanks to an Austin resident's recent settlement with the U.S. government.

With a green light from the State Department, Cody Wilson is inviting anyone who wants access to his code to create firearms using a 3D printer to, well, come and take it.

But don't mistake this for a Second Amendment triumph, one of Wilson's lawyers says. It's more about the First.

“I know people make it about guns, but it's about free speech,” said Josh Blackman, who fought the government over the prior restraint of the files on First Amendment grounds.

The settlement with Wilson's nonprofit, Defense Distributed, as well as the Second Amendment Foundation, was announced Tuesday.

Plaintiffs claimed it as a victory in part because it’s a way to circumvent laws regulating how guns can be purchased.

It started in 2013, when Wilson was ordered by the government to remove files he’d posted online that could be downloaded and used to make guns with a 3D printer. At the time, officials cited regulations for exporting firearms.

In the settlement agreement, the government gave Wilson's nonprofit the OK to distribute such files.

Wilson agrees with the hype over the settlement — that it's a First and Second Amendment win — but he's also in it to “make a resource for American gun culture,” he said.

How did this come about?

In 2013, Wilson designed and built a 3D printed gun, tested it out and uploaded its design files to the internet so anyone else could do the same.

After Wilson got the takedown order from the government, he joined forces with the Second Amendment Foundation to sue the State Department, filing a lawsuit in 2015 in a U.S. district court in Texas.

3-D printing essentially puts manufacturing into the hands of any user with access to a plan and the right printer, which uses layers of plastic, metal or other materials to create a complex device.

Eventually, Defense Distributed and the Second Amendment Foundation offered to settle with the government.

To their surprise, the State Department agreed, and the plaintiffs got almost all of what they’d asked for, said Alan Gottlieb, founder of the Second Amendment Foundation.

Why did the government settle?

The Bureau of Alcohol, Tobacco, Firearms and Explosives (ATF) led a multi-agency working group testing the use of 3-D printing technology in the making of firearms in November 2013 This test focuses on the Liberator design.

The settlement came at a time where the government is working to transfer oversight for the export of firearms, among other things, from the State Department to the U.S. Department of Commerce.

Currently, the State Department is responsible for regulating how weapons and other military goods are exported, including manufacturing information and technology.

Under a set of laws that govern how these exports can work, called the International Traffic in Arms Regulation, people or companies need government authorization to post technical information for certain firearms, even those that are available commercially.

That was the issue in this case: The government initially said Wilson needed government authorization to post files that could instruct a 3D printer to make a gun.

In this case, the impending shift of regulations would eliminate the requirements that were the issue here, according to a statement from a State Department spokesperson.

That includes the requirement to get government permission before posting files that would, say, let someone 3D print their own gun at home.

Blackman said the settlement came after the “government recognized they weren’t going to win.”

What does this mean?

The settlement says Defense Distributed’s customers and the Second Amendment Foundation’s members can “access, discuss, use, reproduce and otherwise benefit” from the sort of technical data and files that started this dispute.

Wilson said he plans to do more than that. He’ll gather and host “encyclopedic” information for homemade gun-making, including files, drawings and designs that could make do-it-yourself firearms accessible to anyone.

“We’re passing laws in Connecticut and other states to make sure these weapons of war aren’t getting into the hands of dangerous people,” Murray told WIRED. “They’re working in the opposite direction.”

When asked if he worried at all about the unintended consequences of his plans, Wilson said: “Not to be glib, but not really.”

Is printing a gun legal?

It’s legal to build a firearm without a license, according to the Bureau of Alcohol, Tobacco, Firearms and Explosives.

But under the law, the weapon can only be for personal use. Anyone wanting to sell or distribute a homemade gun would need a license to manufacture firearms.

State and local governments can still regulate licensing and other requirements for DIY guns.

Why is it a win for the First Amendment?

Any time the government lifts a prior restraint, that’s a good day for the First Amendment, Austin attorney JT Morris said.

Morris, who specializes in the intersection of First Amendment law and technology, had been following the case over the past few years, but he wasn’t involved in it.

The plaintiffs’ lawyers argued that their freedom of speech was violated because code counts as free speech.

“The ‘code is speech’ argument is valid. It’s one we’re going to see applied more,” Morris said. “Code is a manner of providing information to others.”

And just because not everyone can read code, doesn’t mean it’s not a form of expression, he said.

The settlement “strikes at the heart of future gun control,” Gottlieb said.

Wilson echoed the sentiment in a tweet: a photo of a gravestone with the engraving: “AMERICAN GUN CONTROL.”

But more than that, Gottlieb said, the settlement gave gun-rights advocates “ammunition” for future debates on what constitutes a military weapon.

A surging gun-control movement after the Parkland, Fla., school shooting in February has sought to ban weapons like the AR-15, pointing to them as unnecessary military weapons that the general public doesn’t need.

But by that definition, Gottlieb said, those rifles aren’t considered military weapons.

“For us, it gives us great stuff to use in public debates, as well as in court cases,” he said.

To Wilson, who’s been described as a radical libertarian, downloadable guns are the natural extension of open-source technology.

“Everybody benefits in the economy of collaboration,” he said. “So it would only make sense that it would eventually move to the firearms world.”

Come Aug. 1, anyone will be able to download the types of files he fought to post freely, including firearms blueprints and Wilson’s first 3-D printable gun, “the Liberator.”

While the settlement is written to give specifically Defense Distributed and the Second Amendment Foundation the ability to post the files, it seems anyone else could eventually follow suit, Gottlieb said.