From Disappointment River, published this month. In the summer of 2016, I canoed the enormous Mackenzie River, the second longest … Continued 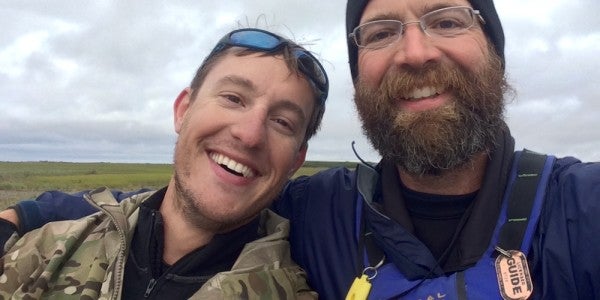 From Disappointment River, published this month.

In the summer of 2016, I canoed the enormous Mackenzie River, the second longest in North America, 1125 miles to the Arctic Ocean. From the moment I began planning the trip, I knew the biggest logistical challenge was finding the right paddling partner. But as I asked people to join me, I quickly discovered no one had a whole summer to devote, so I came up with a plan to divide the trip into quarters, ask four friends to each sign up for a leg; they would be like runners in a relay race and pass me as the baton.

I needed two main things from my paddlers: an ability to endure the rigors of the journey, and a strength of friendship that would survive two weeks alone in a canoe. Not surprisingly, two of my old military buddies fit the bill. Anthony Sennhenn—whom everyone calls “Senny,” for his sunny disposition—is a fellow bomb tech. Senny had a lot of thoughts on bears, as he’d do the last leg with me above the Arctic Circle.

My second veteran paddle mate was Landon Phillips, and he met me halfway through my trip, at the little village of Tulita. Landon flew in from Italy, where he had just finished a tour as the commander of the engineering squadron at Aviano Air Base. He was still a lieutenant colonel in the active-duty military, and coming off a workaholic assignment, he had, astoundingly, agreed to spend nine days of leave with me instead of his wife and three sons.

Some people wonder how their lives might have been, had they taken a different fork in the road. I never have to, because my doppelgänger is Landon, and if I had stayed in the military, I’d be living his life. We met as brand-new second lieutenants, attended initial training together, and then met up every year, hitting the same career milestones. When I ran a bomb squad in Kirkuk in 2006, Landon did the same in Baghdad. Then our paths diverged, but not our friendship, so that by the time he got off a plane in Tulita, we had known each other almost half our lives.

I met Landon at the airport. Any passenger on his flight could tell he was the military guy: trimmed hair, stocky, broad shoulders. His call sign is “Short Round.”

“Your hired voyageur has arrived,” he said in a Tennessee twang. “I’ve been looking forward to this for months. Let’s do it.” After his stressful job in Italy, he smiled like a man just let out of jail.

In the far north the sun never sets in summer, so though it was late in the afternoon we hit the water right away. It was four miles to the campsite at the base of Bear Rock. We crossed the Great Bear River, crystal clear and icy, and I stopped and gulped two bottles before filling all of our water bladders. The campsite itself was marked with a sign—“This is what it’s like every night, right?” Landon asked, sarcastically—but there was little room to pitch the tent, so we put it directly on the trail. “That’s like hot dog in a hallway,” he said of the setup.

Landon was jet-lagged from four days of flights, but we woke early anyway, to follow the trail to the top of Bear Rock, twelve hundred feet above the river. I had been in the wilderness almost a month, but had barely walked, and I wanted to stretch my legs. I was winded almost immediately; what a strange activity paddling is. The view was a carpet of flat green, occasional ridges of rock poking up in isolated mountain ranges. I felt as if I could see the curvature of the earth, but no sea was yet in sight.

After only thirty minutes, the trail petered out. We scrambled up a ledge, surprised a fox, and then thought we found a very faint path, heading into a copse of trees. We followed, but the trail ended immediately in a massive pile of bear scat.

“We found their shit spot,” Landon said, and we turned around.

Excerpted, with permission of the author, from Disappointment Riverby Brian Castner, copyright 2018.