That’s Rotten! Why Gun Crews In The Age Of Wooden Ships Aimed Low

I always thought that in the age of fighting sail and wooden ships, gun crews aimed their cannons at the... 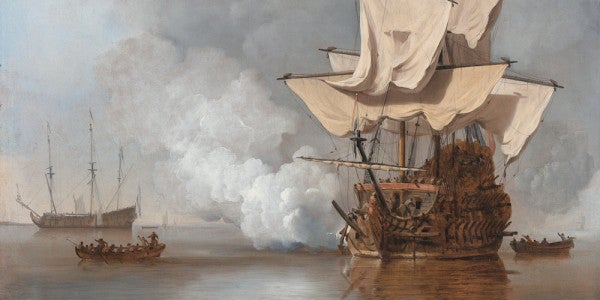 I always thought that in the age of fighting sail and wooden ships, gun crews aimed their cannons at the waterline because that would sink the enemy’s ship. But, I kind of wondered, if that were the case, why not aim slightly lower, where a good shot likely would let even more water in the enemy’s hull, and be more difficult to plug? (I thought the answer was perhaps that at many angles, the cannonball might skip, rather than plunge into the water, but I wasn’t sure.)

Well, now I know better. There is a very specific reason to aim right at the waterline.

I was reading an discussion of wood rot in boats and trees by Richard Jagels, professor emeritus of forest biology at the University of Maine. He offers a much more precise explanation: On wooden ships, the weakest point on the hull is right along the waterline, because that’s where the most rot occurs.

There’s a biological explanation for that, having to do with oxygen and moisture. Fungi need a balance of both to thrive and rot wood. Let him tell you: “Above the waterline, planking is usually below 20 to 25 percent moisture content, which is too dry for fungal activity. Below the waterline, wood becomes progressively saturated until the oxygen requirement is not met; again decay is halted. Near the waterline, conditions are just right for decay to rapidly progress: the Goldilocks solution for rot.”

cannon
sail
Ships
ships of the line
The Long March