Kevin Rudd, the former Australian prime minister, and an expert on China, reviews the U.S.-China relationship in a powerful article... 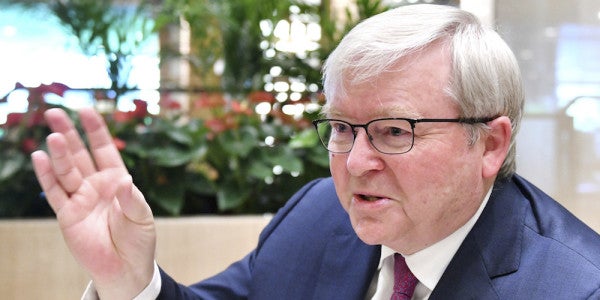 Kevin Rudd, the former Australian prime minister, and an expert on China, reviews the U.S.-China relationship in a powerful article that will run in the December issue of Proceedings. He begins and ends politely, but in between delivers a pretty damning assessment of the Trump Administration’s performance. Worth keeping in mind as Trump heads into the G-20 on Friday and Saturday.

Among the demerits he assigns:

He goes on to ask 10 tough questions of the Americans. One of the hardest is when he wonders aloud what reason other countries would have to buy into the nationalistic American stance laid out by Vice President Pence in a speech last month.

“Pence’s address was consciously and eloquently couched in terms of U.S. interests and values,” writes Rudd. “But it made no appeal to the international community’s common interests and values . . . . Instead, the world has seen the current administration walk away from a number of critical elements of the order constructed by its predecessors over seven decades (human rights, multilateral trade regimes, climate change, the International Criminal Court, and U.N. aid agencies) under the rubric of the nationalist call of ‘America First.’”

I’m told a link for the article will be up on USNI’s website tomorrow (Friday) afternoon.

australia
China
How The Other Half Fights
The Long March
voices