Adm. Mike Mullen Meant Well, But His Legacy Is A Screwed-Up Navy

Folks don't talk about it much, but one man is responsible for a good part of the decline of today's... 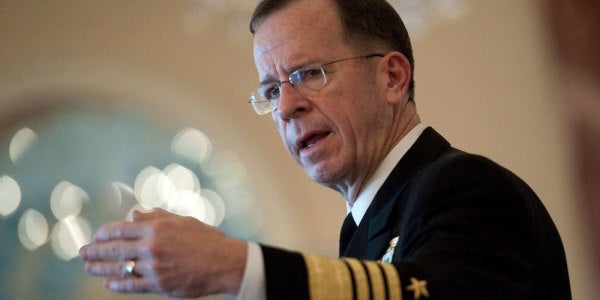 Folks don't talk about it much, but one man is responsible for a good part of the decline of today's U.S. Navy: Admiral Mike Mullen (retired), the genial 28th Chief of Naval Operations and then 32nd Chairman, Joint Chiefs of Staff.

Mullen had the ideal resume for both jobs, but as so often occurs, sometimes those folks do the most damage. He had punched all the right tickets in his career right up through four-star command at NATO before becoming CNO in 2005. Mullen was supposed to the type of leader who would bring real change. He did.

As CNO Mullen’s first priority was to help the ground forces in the so-called Global War on Terror with their manning problems in Iraq and Afghanistan. He beefed up the Individual Augmentee (IA) program that provided thousands of sailors for duty ashore but did not reduce the sea-duty requirements for those sailors. At its height, the program had nearly 10,000 sailors ashore, many in combat jobs.

In order to give these sailors a sense of identity, Mullen also instituted the now infamous Navy combat uniform known as “aqauflage.” The joke in the fleet soon became, “Don’t fall in the water, the Search and Rescue (SAR) Teams will never find you.” Mullen didn’t stop there, he continued downsizing of the Navy’s personnel end-strength even as the requirements for people due to the IA program went up. He continued these advocacies as CJCS in 2007 through his successor, the new CNO, Gary Roughead.

It was as CJSC that Mullen oversaw the “reprogramming” joint education billets out of the joint professional military education community (JPME) into the explosion of “joint” land-based staffs created by the GWOT. These billets have never returned to the JPME community. The impact on joint education has been profound and the subject of discussion about reform inside the Department of Defense.

Finally, these billets never migrated back to JPME, even in today’s reduced operational combat environment. This development can be laid directly at the door of Mullen and his successors. The result has been that the services, especially the Navy, do not fill all their war and staff college instructor billets and have the same problem with their student billets. For example, the Navy has yet to fill its joint director billet (an O-6) at the Command and General Staff College (CGSC) at Fort Leavenworth and sends half its required student complement for the Army’s resident staff course.

Mullen’s impact was not entirely negative. He bequeathed the first Maritime Strategy since the 1980s, A Cooperative Maritime Strategy for the 21st Century (CS-21). CS-21 fell flat in the public imagination, its message of the Navy as “a global force for good” obscured by shrinking fleet size, both in ships and people and a relentless operational tempo that (ironically) degraded seamanship. Mullen and his successors continued to make key program mistakes with a variety of troubled high-end programs, from Littoral Combat Ship and the DDX1000/Zumwalt program to the Joint Strike Fighter.

Recently, a carrier pulled into Hawaii for RIMPAC and a friend of mine commented on how beat up and rusty this giant ship looked compared to a nice, clean, new Australian warship. My answer: the Aussie ship didn’t steam three-quarters of the way around the world and back with a lengthy deployment in the Persian Gulf and North Arabian Sea, with little time to “clean the ship up” during a very busy operational deployment—the difference between a ship at war and ship at peace.

Today’s sailors still look like they serve in the Army and the fleet is shrinking with each passing day. And Mike Mullen meant well.

Dr. John T. Kuehn is a former naval aviator, retiring as a commander from the U.S. Navy in 2004. He is a professor of military history at the U.S. Army Command and General Staff College. Dr. Kuehn is the author of Agents of Innovation (2008), Eyewitness Pacific Theater (2008) with D.M. Giangreco, and America’s First General Staff (2017), as well as numerous articles and editorials.