UNSUNG HEROES: The Airman Who Died After Rescuing A Family From A Burning Building

U.S. troops stationed at Osan Air Base in South Korea are mourning the loss of one of their own, who … Continued 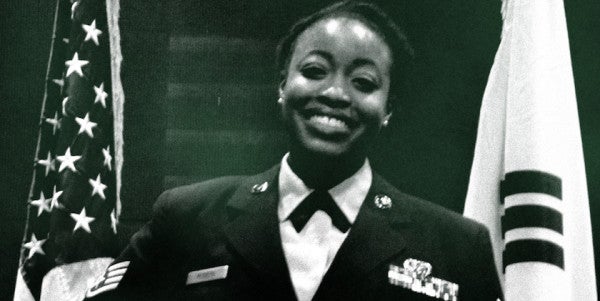 U.S. troops stationed at Osan Air Base in South Korea are mourning the loss of one of their own, who risked her life to save a local family from a burning building.

On April 29, a devastating fire broke out in a South Korean residential building where Air Force Staff Sgt. Cierra Rogers, a 731st Air Mobility Squadron administrative assistant, was visiting a locally residing family — a 30-year-old mother from Nigeria and her three children, ages 1, 3, and 4.

According to the Associated Press, Rogers smelled smoke and soon realized that she and the Enyioko family were trapped. She kicked out a window in order to allow access to the patio, and then tried to climb down the 37-foot building with only a thin wire to find help.

Other U.S. personnel who were in the area saw Rogers fall from the building and rushed to her aid. The rescue team of about 10 people then caught the family of four with a large blanket as they jumped from the fourth story — most of which can be seen in a graphic video taken from a witness’ cell phone.

“I just did what I thought was right,” Rogers said in an interview with Fox News. “If we'd stayed in that building without me doing anything, we would have died.”

Rogers, 26, was a native of Dallas, Texas. She was hospitalized days after the heroic rescue effort and required surgery. Rogers was discharged from the hospital and even made an international move back to the United States. But soon after arriving to her follow-on duty station in May, she was rushed to the hospital after experiencing chest pains, and died suddenly, according to a Fox News report. The direct cause of her death is unclear and is still being investigated, Air Force Times reports.

The Enyioko family, along with representatives from the Nigerian Embassy and South Korean government, including Lt. Gen. Lee Wang-Keon — the commander of South Korean air force operations command — attended her memorial service.

“Staff Sgt. Rogers' honorable actions to help those in danger were a true example of what it means to serve,” Lee said. “We highly respect her courageous actions and will forever remember her noble sacrifice.”