UNSUNG HEROES: The Platoon Sergeant Who Braved Grenades And Gunfire To Rescue His Soldier

On Aug. 16, 2008, a reconnaissance platoon with the 101st Airborne Division’s 61st Cavalry Regiment was dispatched to aid a... 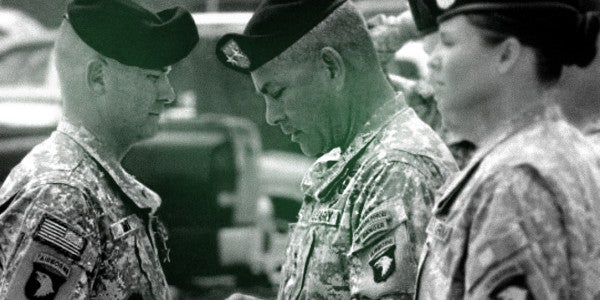 The soldiers, led by Capt. Kevin Bell, could hear the sound of gunfire as they approached the objective. The enemy was close. So close, in fact, that the station was under threat of being overrun. A firefight was inevitable.

You can plan for a firefight, but when a soldier goes down, plans tend to fall apart. Hard choices must be made, and made fast. And it’s always a gamble: On the battlefield, lives are saved by soldiers risking their own.

That day in August, Sgt. 1st Class John I. Smith, the platoon sergeant, took that gamble — and it paid off.

“He says he is not a hero, but he is definitely a hero,” Bell later told the Army. “The example he set is what I remember most. … His reaction was do not think about myself, but help save someone in need.”

It began just about as soon as the platoon dismounted their vehicles. As the soldiers moved to assist the wounded Afghans, the enemy opened up with a barrage of rocket-propelled grenades and small-arms fire. The soldiers fought back until the incoming fire stopped.

Smith and his men then shifted their attention back to the Afghan casualties. And then the incoming fire resumed — and with more accuracy.

“As one of the team’s soldiers was inspecting what we thought was a wounded [Afghan National policeman], he was hit with a grenade and small-arms fire,” Bell said.

The lone soldier went down in the middle of a dirt road. About 10 meters away, a pair of insurgents were hunkered down in a ditch. And beyond them, approximately 250 meters away, an enemy machine-gun team was letting loose. It was a death trap.

“I would not stop, no matter what the cost, to get him out of harm’s way,” Smith recalled during an award ceremony two years later. “That’s what soldiers do. The warrior ethos states, ‘I will never leave a fallen comrade.’”

Smith was wounded himself but refused medical aid. Instead, he rallied two medics and led a charge across open ground.

“I had to get face-to-face with the enemy to get the soldier,” Smith said. “We got into a shooting match.”

The enemy gunfire was accompanied by more grenades, but the three men pressed on. Unable to get a clear shot, Smith answered with two grenades of his own. Those did the trick.

“I had to silence the enemy in order to evacuate ,” Smith said.

Smith was awarded the Silver Star for his actions that day. At the award ceremony, Maj. Gen. John F. Campbell, commander of the 101st Airborne Division, said, “My son is going into the Army. I would be very, very proud if my son could serve underneath a noncommissioned officer like Sergeant First Class Smith.”