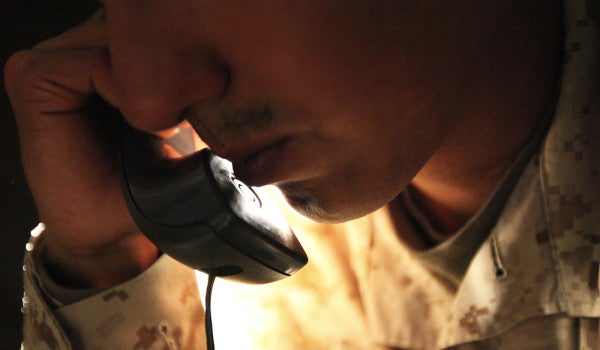 Last spring, the Department of Veterans Affairs Inspector General’s office reported that its Veterans Crisis Line was mired in overloads and delays. An update to the investigation now suggests those problems have only gotten worse.

For the last six months of 2016, the Veterans Crisis Line sent 28% of its calls to backup centers. By December, the amount of calls sent to backup centers was roughly 30%, even after opening a second official call center in Atlanta in October.

The backup centers, which are not run by the VA, ensure that veterans are not left with no one to talk to, but are often not trained to handle all the needs of callers.

The inspector general found last year that staffers at the centers did not always pick up calls quickly, were not always trained to the same level as those at the VA call center and some calls were routed to voicemail,” according to USA Today.

John Daigh, an assistant inspector general, wrote that the hotline didn't have the resources to answer the volume of the calls it received, Military Times reported.

“This led to an increase in the number of calls that rolled over to backup centers and delays in the development and implementation of processes, policies, and procedures,” Daigh wrote.

He also suggested that the opening of the Atlanta call center created more wait times than it fixed in the beginning, adding that poor planning led to the temporary transfer of hotline workers from the original facility in upstate New York to Atlanta to help with training.

But the VA is insistent that the hotline is doing its job.

The hotline is “the strongest it’s ever been since its inception in 2007,” Poonam Alaigh, the VA’s acting undersecretary for health, said.

The crisis line has answered more than 2.5 million calls since it was opened in 2007. In addition to sending emergency services to more than 66,000 callers, it was also featured in an HBO documentary — “Crisis Hotline: Veterans Press 1” — that won an Oscar in 2015.