She Tried To Raise The Standard For Female Recruits. The Marines Fired Her For It. This Is Her Story 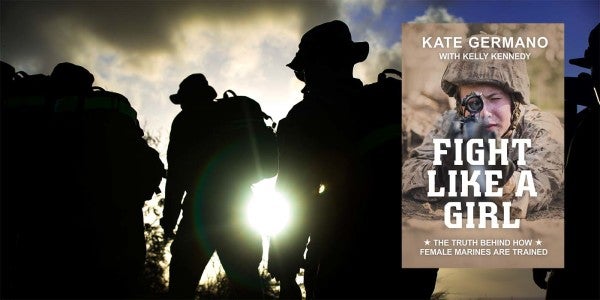 Infantrywoman. Tank commander. Aircraft door gunner. On March 1, to kick off Women’s History Month, the U.S. Marine Corps released a video depicting female Marines in serving in combat jobs, followed by photographs of female Marines from previous eras, with the tagline “For every woman who fights, there is a woman who fought for her.”

Women who are an integral part of the Marine Corps and have served with honor and distinction for the last 100 years, helping fight and win the nation’s battles in every clime and place. #WomensHistoryMonth pic.twitter.com/AchgQA3jav

For many female Marines, whether or not they know it, the woman who fought for them is Kate Germano.

Germano retired from the Marine Corps in 2016 as a lieutenant colonel after being removed from her command of the 4th Recruit Battalion — the female boot-camp battalion — at Parris Island, South Carolina. The reason? The Marine Corps claimed Germano created a toxic command climate, and tried to publicly shame her as a poor leader and unhinged woman in the press.

But few believed that story — not even the Marine Corps Times.

The real reason Germano was relieved? Relentlessly pursuing higher performance from female Marine recruits, which included raising the expectations and standards to which they were trained, while also lowing injury and attrition rates. In just a year, both recruits and Marines in 4th Battalion were performing the best they ever had, and in many cases, were outperforming men.

The book outlines how female Marine recruits were held to lower standards for years, because of benevolent sexism that didn’t expect more of them.

It was very inconvenient for the Marine Corps, which was looking for ways to assert that women would make combat units less effective and seeking an exception from the Department of Defense for gender-integrating ground combat military occupational specialties.

This is the story that Germano tells, simply, with humor, candor, and often gut-wrenching detail in a new memoir of her time at Parris Island, Fight Like a Girl: The Truth About How Female Marines are Trained, written with Army veteran Kelly Kennedy and forthcoming in April.

In a departure from other memoirs by female officers, which often emphasize combat experience while downplaying gender, Germano and Kennedy tell a story with vulnerability, self-reflection, humor, and a complete willingness to address the often-frustrating experience of serving while female.

The book outlines how female Marine recruits were held to lower standards for years, because of benevolent sexism that didn’t expect more of them. This resulted in lower performance — and less respect from male Marines, who were told as recruits that female Marines were inferior, even though they barely even had the opportunity to see their women counterparts train.

“I had no perception of female recruits,” a male Marine non-commissioned officer told me of his time as a recruit at Parris Island. “Might have seen them twice the whole time that we were on the Island – and if you were caught looking at them, you knew it was going to be a bad day.”

When Germano ensured female recruits were held to higher standards, though, they met those standards.

The Marine Corps is the only service branch that still segregates recruits by gender, start to finish; it also has the lowest percentage of women (7%) and highest rate of sexual assault and harassment in the entire military. A year after the Marines United story first broke, all services — but particularly the Marine Corps — have continued to wrestle with their members’ nonconsensual sharing of servicewomen’s private photos.

To Germano — who since her retirement has written extensively about the subject, including for Task & Purpose — all these issues are linked, because acculturation of the values and traditions of the Marine Corps begins at boot camp. Several male Marines recalled that denigration of female Marines begins at recruit training and even before.

A male Marine sergeant, who spoke with me on condition of anonymity because he is still serving, said it started before he even shipped out to Parris Island: “My recruiter said that the Marine Corps is a 95% male organization. There must be a reason why women come to join. He was referencing a female recruit as someone who sleeps around. Then at boot camp, a drill instructor referred to women Marines as ‘walking mattresses.’”

Sgt. Matt Moores, who served with D Co., 2nd Tank Battalion, from 2009-2016, and medically retired after being injured in action, still recalls in detail how denigrating women was part of recruit training. “We were told from day one that female recruits were disgusting, sluts, whore, walking mattresses, weak, and couldn’t be trusted,” he told me. He noted that the attitude was pervasive throughout the Corps, and directly contributed to a culture of sexual violence; even speaking out in his unit against sexual assault was seen as controversial, he said.

It’s not completely obvious why the Marine Corps was so hell-bent on keeping women out of combat arms when the Army, Air Force, and Navy — including their special operations branches — all agreed that anyone who was qualified and could meet standards for all military occupational specialties should be allowed to do so. But Fight Like a Girl begins to present a roadmap: If masculine identity is staked in holding ground-combat jobs, when a woman can meet the standards and enter those jobs, it can leave men feeling like they have no means to prove their masculinity.

It threatened their very identity as Marines.

As Germano documents, and as the male Marines I interviewed confirmed, the toxic behavior is not just about women, but about reinforcing a particular kind of masculinity and gendered hierarchy — often with violence.

One of the officers who made Germano’s life particularly difficult, Lt. Col. Joshua Kissoon, was eventually court-martialed for actions that led to the death of Muslim recruit Reheel Siddiqui and complicity in other abuses of recruits.

It’s clear from the book — as Germano reflects herself — that she is still coming to terms with the fact that the Marine Corps, which she served for two decades, actively sought to find a way to get rid of her and publicly shame her for doing her job well.

What Germano and Kennedy have accomplished with this book is not just to document the Marine Corps’ attitude towards women, but to provide a framework of what good leadership looks like: being authentic, open to criticism and willing to learn; taking care of your people, most of all; and pursuing excellence in building a stronger fighting force. Those virtues arise in your head and your heart, they remind us — not in your chromosomes.

Fight Like a Girl is available for pre-order and is due for release on April 3, 2018.