The fog of war, just kills, and war crimes are the focus of a new documentary series about Lt. Clint Lorance, the Army infantry officer who was convicted on murder charges for ordering his soldiers to fire on three unarmed Afghan men on a motorcycle, killing two and wounding the third. 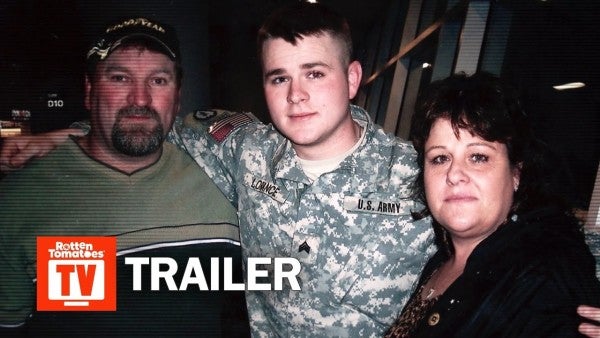 The fog of war, just kills, and war crimes are the focus of a new documentary series coming to STARZ. Titled
Leavenworth, the five-part series profiles 1st Lt. Clint Lorance, the Army infantry officer who was convicted on murder charges for ordering his soldiers to fire on three unarmed Afghan men on a motorcycle, killing two and wounding the third, while deployed to the Zhari district in Kandahar province, on July 2, 2012.

Directed by Paul Pawlowski, the series' hour-long episodes walk the viewer through the shooting; the allegations that the killings were unlawful; the findings of the military court that sentenced him to serve 20 years in a military prison at Fort Leavenworth, Kansas (before that was reduced to 19 years); the campaign calling for Lorance's exoneration; and the efforts of his attorneys to have his case heard in civilian court after the military denied his appeal.

Leavenworth, which comes out on Oct. 20, is told in the style of a true-crime documentary. The first episode inches along slowly: There's Lorance's childhood, growing up in a small rural town; shots of the local market where he worked his first job, eventually being promoted to manager at 16. Then Sept. 11, 2001, and the decision to enlist — a choice that later interviews attribute to Lorance's search for belonging, his desire to prove himself, and his fears of coming out as gay in a deeply religious community.

“I'd gone through a period of my life where I thought I was an abomination,” Lorance explained in episode one. “My whole life has been internal combat, and so it was natural for me to go into the Army. You're in this small world and you know that a bigger world exists on the outside and you've got to see it for yourself. The Army was a great place to do that.”

There's snapshots of his early years in the service: A deployment to South Korea as an 18-year-old enlisted soldier; time in college, taking advantage of the “Army's best kept secret” as Lorance refers to the Green to Gold program; then a commission to second lieutenant; followed by cuts to the 82nd Airborne at Fort Bragg, North Carolina where he trained as a paratrooper; and interviews from former platoon-mates and soldiers who give a hip-pocket class on infantry culture, replete with war stories and dick jokes.

“It apparent from the start that the story had all of the best elements – real conflict, stakes, character, and had so many layers, but we knew that ultimately it was an important story,” Pawlowski told Task & Purpose of why Leavenworth's producers decided to focus on Lorance. “People's lives are affected in a big way by the topics we cover and telling this story would be challenging, but could mean something bigger …. making an important story in well-structured, evocative manner was our goal, and Lorance's story had all the ingredients and more.

As a series, Leavenworth is a slow-moving profile and generally seems to be shot from Lorance's side of the fence. It's hard to tell whether that's an effect of the narrative style — humanizing a subject in order to hold the viewer's attention — or an attempt to bring the audience into Lorance's corner or quite possibly, both.

“We made best efforts to represent myriad perspectives in this complicated and nuanced narrative,” David Check, an executive producer on the series told Task & Purpose. “That includes the POV's of local Afghans who were impacted by this incident, the platoon members who ultimately testified against their PL and of course Clint.”

A new documentary series coming to STARZ follows the story of Clint Lorance, an Army infantry officer charged with murder for ordering his soldiers to fire on three unarmed Afghan men, killing two, and wounding a third.(STARZ)

More than anything else, the series feels like it's geared toward those who have never heard of Lorance, have little familiarity with military life, have no first-hand experience being deployed to Afghanistan during the surge of the 2010s, and know little of the ambiguity of counterinsurgency operations. And that could be a good thing.

Whatever you may think of Lorance, and how he's been held up as either a war criminal or a wrongly convicted soldier by the media,
and some members Congress, there's value in taking a moment to provide some context on what that war looked like at that period of time.

The show gives viewers a glimpse of how confusing it was to go out on daily, if not twice-daily patrols, and build rapport — almost always through interpreters, so establishing a real relationship was beyond reach — with people who may very well be trying to kill you the next day. A place where water jugs packed with homemade explosives were buried under coffee, or light-brown, maybe even burnt-orange dirt (depending on where you were and when); where a random burst of AK fire could signal the start of an attack, or be an attempt to lure a patrol down a goat path, into a compound, or over a rickety plank spanning a wadi (irrigation canal) where more booby traps or an ambush might be waiting. Add to all that, if you kill the wrong person, or even the right one, then you may add more fighters to the insurgency's roster.

Given how thick the fog of war was in Afghanistan at that time, it's not hard to see why so many have taken up Lorance's banner, and assume he is, as he's claimed, a soldier who was wrongly charged for doing his job. It makes for a compelling argument, sure.

Clint Lorance is serving a 19 year prison sentence at a military prison at Fort Leavenworth, Kansas.(STARZ)

But, to
Leavenworth's credit, the series doesn't stop there. In fact, its greatest success is how it complicates the oft-simplified war is messy rhetoric, or the more cavalier you don't know, you weren't there narratives that flood any comment section on a topic even tangentially associated with the military. And it does so by informing the audience that the military has some built-in safeguards against bad judgement, mainly: NCOs.

One of the platoon's most senior soldiers, Staff Sgt. Mike McGuinness, who was on his third deployment to Afghanistan when Lorance took over the platoon after its previous commander was injured, actively sought to override Lorance's orders to fire on unarmed civilians.

To put it another way: If you're a fresh lieutenant who's never led a platoon before and has only been with the unit for a few days, like Lorance was, and your far-more-experienced sergeant challenges your order to fire on unarmed civilians, you should probably listen to him.

In the series, four of Lorance's former soldiers with 4th Squadron, 73rd Cavalry Regiment, including McGuinness, recount the July 2, 2012 shooting and the events that led up to it, and it's then that we see a different version of Lorance. To hear them describe their former lieutenant, he was ignorant of local customs and counterinsurgency operations, openly hostile to the Afghans, self-conscious that he wasn't yet a battle-tested leader, and compensated for that by being more aggressive than was necessary. As if to underscore that, the second episode details how on his second day with the unit, Lorance ordered a soldier standing post at Strong Point Payenzai to fire into the nearby village of Sarenzai, “so they'll think we're shooting at them and will come talk to us,” Lorance said.

Later in the episode, the July 2, 2012 patrol is recreated with a mix of graphics, maps, a little bit of CGI, and numerous interviews. As the platoon prepared to move out, Lorance delivered new orders: due to concerns over vehicle-borne IEDs and suicide bombs, people on motorcycles were to be considered hostile. The sudden change to the rules of engagement wasn't well received. As members of the platoon remark in the episode: motorcycles are ubiquitous in Afghanistan, to treat every person on one as a threat, would be a recipe for disaster.

In the episode, McGuinness said that immediately after the ROEs were changed, he told his soldiers to disregard any orders to fire, unless they come from him, or Sgt. 1st Class Keith Ayres, the platoon sergeant.

Former Army Staff Sgt. Mike McGuinness was on his third deployment to Afghanistan on July 2, 2012, when 1st Lt. Clint Lorance ordered the platoon to open fire.(Leavenworth)

Shortly after the patrol stepped off, a motorcycle was spotted nearby.
According to transcripts from Lorance's court-martial, Pfc. James Skelton said he was ordered to fire (In Leavenworth, Lorance claims that Skelton asked him for permission to engage, and granted it).

After Skelton fired twice, and missed, the three Afghans riding the bike stopped, dismounted and began to walk toward the Afghan National Army soldiers out at the front of the patrol, but were waved off and sent back to the motorcycle. Then, Lorance ordered a nearby MRAP providing overwatch to open fire on the unarmed men with its m240 machine gun. The order was ignored, repeatedly.

“Clint kept yelling at us to shoot them, and he said 'why isn't anybody firing?'” Todd Fitzgerald, one of Lorance's soldiers who was there that day said in the series' second episode.

The next several moments are depicted as a chaotic screaming match over the radio, with Lorance ordering the turret gunner of the MRAP to fire, and McGuinness repeatedly telling the soldier to ignore the lieutenant's order. A few moments later, a burst of machine gun fire rang out from the MRAP's turret, leaving two men dead, another wounded.

“This was where everything was gonna fall apart,” Lucas Gray, another soldier in Lorance's platoon said in the episode.

Lorance, for his part, remains adamant that his soldiers are wrong.

“The platoon's version of events is ill-informed,” he said in
Leavenworth's second episode. “From my experience of what actually went down, when my guy fired at it, and it kept coming, that signified hostile intent, because he didn't stop immediately.”

Perhaps the hardest thing to reconcile about Lorance's version of what happened, and the sympathetic tone conveyed in parts of
Leavenworth, is that nobody from his platoon, not one of his soldiers or NCOs who was there that day, stood by his decision. The idea that Lorance was just trying to protect his men by doing the hard right thing, simply doesn't square with the fact that his soldiers, especially his NCOs, didn't trust his judgement. In fact, members of his own platoon testified against him during his trial.

One of the interview subjects for the series, former Task & Purpose staff writer Adam Linehan, framed it like this in the show: “It's one thing to make an iffy decision. It's another thing to just deliberately murder someone. Whatever had happened there was so strange, so out of the ordinary, that these infantrymen were like 'that's fucked up.'”

For a military audience, this sends up red flags: It's not often that soldiers challenge an order, let alone close ranks against their own commander. Based on the commentary from the four soldiers interviewed in Leavenworth, the implication is: They must have done it for a good reason.

Leavenworth premieres on STARZ on October 20th at 9:30pm.