Mattis Personally Intervened To Fill The DoD Budget With Munitions. Now He’s Getting Even More

When the Department of Defense dropped its fiscal year 2018 budget request back in May, Pentagon officials revealed that Secretary... 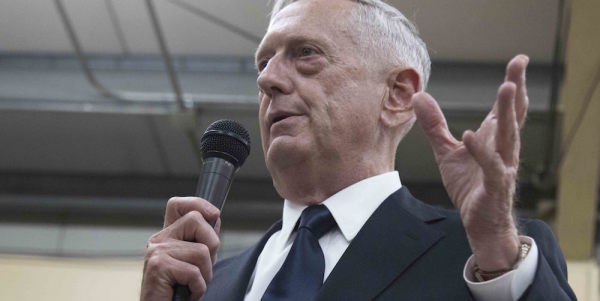 When the Department of Defense dropped its fiscal year 2018 budget request back in May, Pentagon officials revealed that Secretary of Defense James Mattis personally intervened to jam as many “preferred” munitions as possible to replenish arsenals rapidly depleted by the intensifying bombing campaign against ISIS targets in Iraq and Syria. Now, it looks as though Congress is giving Chaos exactly what he wanted.

Congress has reportedly authorized the Pentagon comptroller to reallocate a hefty $412 million from various 2016 and 2017 programs to boost acquisitions of “select” precision munitions like the Small Diameter Bombs (SDB) and Joint Direct Attack Munition (JDAM) guidance kits that are fixtures of Operation Inherent Resolve, Inside Defense reported on Oct. 6. The approval will allow DoD officials to “immediately” enhance existing stockpiles as part of the Pentagon’s ongoing bomb shortage.

The DoD’s initial 2018 budget request detailed $16.4 billion for missiles and munitions, up from $14.9 billion in 2017 and including significant increase in those “preferred munitions” Mattis personally “mandated and insisted” acting DoD comptroller John Roth push for during the budget process. As a result, the Air Force will pick up an additional $8 million for SDBs and a whopping $153 million extra for the JDAM guidance kits that can transform conventional munitions into guided “smart” bombs. Some additional deets, from Inside Defense:

“Due to price growth above budgeted values, the Lot 1 fixed-price incentive free contract for the procurement of eight of the planned 10 LRASM was awarded on July 24, 2017,” the reprogramming states. The contract includes an option to procure additional missiles.

“In order to support a critical U.S. Pacific Command Fleet's Enabler Priority, the procurement of seven additional LRASM can be obtained by exercising the contract option, thus enabling the program to procure a total quantity of 15 missiles. Additional missiles are required to enable fleet introduction in 2019,” the document states.

While the additional funding freed up by DoD planners may only account for a 2.5% increase ($100 million of which was tasked for a classified project, Inside Defense notes), it reflects a Pentagon bracing for a prolonged air war against militants abroad. As now-Pentagon Comptroller David Norquist wrote in his Sept. 7 budget reprogramming request, per Inside Defense, the action was intended to provide “funding in support of higher priority items, based on unforeseen military requirements, than those for which originally appropriated; and are determined to be necessary in the national interest.”

Generals receive the brief about the Small Diameter Bomb II test progress as part of a developmental and operation test orientation to the 96th Test Wing and the 53rd Wing, Jan. 27, 2014.DoD photo

Given that military officials like Pacific Command Commander Adm. Harry B. Harris Jr. have been sounding the alarm over potential supply and logistics problems stemming from the prolonged bombing campaign against ISIS in Iraq and Syria, those “unforeseen military requirements” don’t necessarily seem that, well, unforeseen. But the air campaign against ISIS has seen an uptick in operational tempo since the DoD budget request initially dropped earlier this year. In August, the Air Force has deployed more munitions against terror groups in Afghanistan than any other month in the last five years and the most ever against ISIS in Iraq and Syria, a 53% and 16% increase in number of weapons released since May.

With 3,000 U.S. troops headed for Afghanistan in the next few months, the DoD may certainly call upon Congress for yet another boost in expenditures on preferred munition programs. But let this be another reminder that when Mattis says “More bombs,” the default response across the defense sector is a simple “How many?”