He’s A Service Member And Child Of A War-Wounded Vet. Can He Succeed As The Next VA Chief?

The son of a soldier wounded during the Vietnam War, he claims he was born in “khaki diapers.” Now, former... 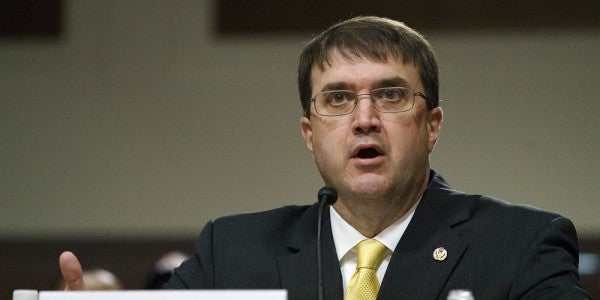 The son of a soldier wounded during the Vietnam War, he claims he was born in “khaki diapers.” Now, former Department of Defense under secretary for personnel and readiness Robert Wilkie seems poised to wade into the mess that is the Department of Veterans Affairs — and, if all goes according to plan, restore good order and discipline to the troubled agency.

At Wednesday’s confirmation hearing, Wilkie fielded questions from the Senate Committee on Veterans Affairs regarding his personal connection to the U.S. military, his long career in public service, and his vision for the VA.

As Military Times’ Leo Shane noted in April, while nobody who makes it that far is guaranteed the job, no senator has voted against a nominee for VA secretary since the position was elevated to a cabinet post in 1988. But in today’s political climate — where, say, past support for Confederate memorials could complicate a nomination as much as toxic leadership — anything seems possible.

Here’s what we know of Wilkie’s personal and professional history — and how his resume prepares him for what’s been described as: “One of the most difficult jobs in government.”

For starters, who exactly is Robert Wilkie?

Wilkie served in the Navy Reserve from 1997 to 2008, during which he helped support operations in Liberia, Albania and the Middle East as a psychological and information warfare officer. Since 2008, Wilkie has served in the Air Force Reserve and is the special assistant to the Air Force vice chief of staff and currently holds the rank of lieutenant colonel, according to his official biography. He is a graduate of the Air Command and Staff College, Joint Force Staff College, U.S. Army War College, and College of Naval Command and Staff, and has a stack personal commendations.

But his ties to the military stretch beyond his own “modest service” he said at the hearing.

Growing up, he passed the local veterans hospital on his way back from school in Fayetteville, North Carolina, where “we could not help but read the sign at the entrance: ‘The price of freedom is visible here,’” he said. Hisgreat grandfather fought in the Meuse-Argonne Offensive in 1918 during World War I, and as a child impressed upon him the “cost paid by ordinary americans caught up in the incommunicable experience of war,” Wilkie continued.

And he’s seen service from the perspective of a military child, even joking during his testimony that when he was sworn in at the Pentagon as the undersecretary of defense for personnel readiness, “it was referenced that I was born in khaki diapers and I think my attitudes toward that and leadership flow from having been in that world my entire life.”

Wilkie’s own father was the recipient of three Purple Hearts, and five Bronze Star Medals, one of which included a combat “V” device. The elder Wilkie, an Army artillery officer, was severely wounded during the invasion of Cambodia and spent a year in a Navy hospital in Hawaii.

“My own life changed when my father returned from his second tour in Vietnam,” Wilkie said at the hearing. “I watched the agonizing recovery and that experience was on my mind when I was asked to come to the VA.”

What are his qualifications?

The VA is the second-largest cabinet-level agency just behind the Pentagon. It’s comprised of three separate administrations, the Veterans Health Administration, Veterans Benefits Administration, and the National Cemetery Administration; accounts for a nearly $200 billion budget for fiscal year 2019; and a workforce of more than 360,000 employees responsible for providing care and services to more than nine million veterans. The VHA alone oversees the country’s largest integrated healthcare system with 170 VA Medical Centers and 1,061 outpatient sites.

Fortunately, Wilkie has a history of managing, and operating in, massive bureaucracies, having spent years at the Department of Defense — the only agency larger than the VA — and his work there is instructive.

In November 2017, the Senate confirmed Wilkie as undersecretary of defense for personnel and readiness. Prior to then, he served as assistant secretary of defense for legislative affairs from 2006 to 2009. During his time at the Pentagon Wilkie helped draft the for the Use of Force Agreement in Afghanistan after Sept. 11, 2001, said Pentagon spokeswoman Air Force Maj. Carla Gleason. He also worked on the task force that helped usher in the MRAP, which saved countless lives on the IED-laden battlefields of Iraq and Afghanistan.

In his current capacity as undersecretary of personnel and readiness, Wilkie has led an effort to make close combat soldiers and Marines more lethal, which has included eliminating unnecessary training for service members — a major part of streamlining sprawling bureaucracies. He has also spoken with senior lawmakers about ending requirements that service members be promoted by a certain time in order to stay in the military. Nor is Wilkie without experience at the VA, or on Capitol Hill, and for two months filled in as acting secretary until he was tapped to be President Donald Trump’s pick for the post.

In other words, wrangling an institution’s unique manpower needs should come naturally to Wilkie.

How’re things looking at the VA right now, and how did we get here?

Wilkie is coming into the VA at a turbulent time. Dr. David Shulkin was ousted from his position as VA chief in March after a travel scandal quickly snowballed, thanks in part to political sniping that played out in the media between the embattled chief, who alleged he was the target of a pro-privatization agenda, and those who argued he was attempting to shift attention from the original scandal.

The abrupt departure of Shulkin, an Obama-era holdover, preceded three months of uncertainty over who would lead the federal government's second-largest bureaucracy. Wilkie was tapped by President Trump to be his nominee for the top spot at the department after the previous pick, White House physician Navy Rear Adm. Ronny Jackson, withdrew his name amid accusations of unprofessional conduct — accusations that included creating a hostile work environment, drinking on the job, and improperly prescribing medication, all of which Jackson denied.

All of this is to say, that the VA has had a gap in stable leadership in recent months, and the lack of continuity poses some considerable challenges.

What are the major obstacles facing a new VA chief?

Staffing remains a problem at the VA, and not just at the top level: As of March, there were roughly 33,000 vacancies across the department, and more employees are leaving, according to NPR, and The Washington Post. But the impact of having top-level vacancies can’t be dismissed out of hand.

“In these interregnums, department employees engage in hedging behavior” Joe Plenzler, American Legion’s national director for media relations told Task & Purpose. This amounts to kicking “the can down the road on major decisions because they don’t want to initiate long-term programs that the next secretary may abruptly change.”

Which makes sense for a department that makes course corrections incrementally and relies on consistent efforts from the secretary to: improve access-to-care; ensure accountability; overhaul its medical record system; trim down its waitlist and appeals backlog; and plan for a future where there’s mounting interest in supplementing VA health services with private-sector care.

“If confirmed as secretary, the biggest mission will be implementing the policy and procedures for the Mission Act,” John Hoellwarth, the national communications director for AMVETs told Task & Purpose.

The VA Mission Act is designed to overhaul the troubled Veterans Choice program, which allows veterans to seek care outside of the VA in certain cases, and would also increase the assistance provided to caregivers for military families.

“One of the things that sticks out about the Mission Act, and one of the things he’ll probably find most challenging, is trying to develop a system to ensure that the community care veterans receive out in their community is up to snuff, that there’s some degree of accountability,” Hoellwarth said.

At the hearing, Wilkie addressed the concern — one that has been brought up by veterans groups and lawmakers in the past: Will privatizing aspects of veterans care ultimately reduce the quality of that care, given how complicated many vets’ injuries are, and how specialized their treatments must be?

“I believe in the centrality of VA to care,” Wilkie said. “I will also say that there are things that VA does that will never be replicated in the private sector: Spinal cord injury; traumatic brain injury; rehabilitative services; and prosthetics audiology services for the blind.”

One idea, it seems, is to insist that the department keep one hand on the wheel at all times. That way it’s less an issue of VA funds going to a private sector doctor, and more a matter of ensuring VA expertise gets to a veteran patient.

“As long as the VA is the central node with his care and he has a day to day experience with the VA,” Wilkie said, “that reinforces, I think, the future of the VA.”