“If you don’t apply for this, I don’t even know you anymore.” Sometimes when Marine veterans talk, I listen. This... 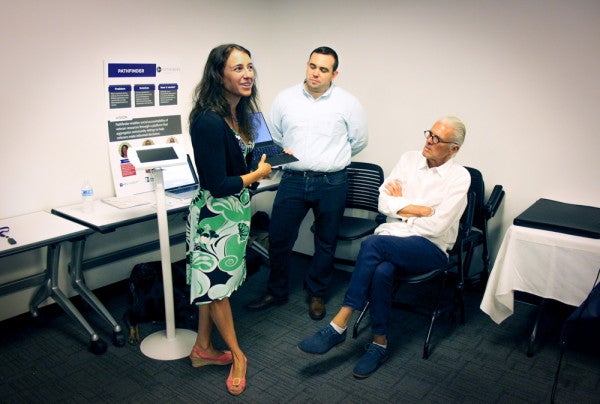 “If you don’t apply for this, I don’t even know you anymore.”

Sometimes when Marine veterans talk, I listen. This particular Marine is an entrepreneur and something of a mentor when it comes to business, so I was inclined to tune in.

He told me to apply for a 10-week, part-time, entrepreneur certificate program for veterans at New York University Polytechnic over the summer. The brainchild of another Marine veteran, the Veteran Entrepreneur Training program turned out to be everything I needed and nothing I didn’t. Having considered business school multiple times, I kept coming back to feeling I just needed essentials, something to complement the skills I already had from both college and the Army. I didn’t want to be a strategy consultant or a marketing wiz, and I didn’t want to relearn leadership or team building. I had an idea for a business, but I needed just a little more knowledge in the right sectors.

The program was perfect because it took into account that all of the attendees were military veterans. It’s supported by NYU’s network of innovation incubators, and it was the first iteration of this veterans-only format. There were quick lectures on the basics we wouldn’t have learned in the military — like venture capital and legal documentation and what tax forms we needed to file — but the rest was focused on mentorship, milestones, and figuring out how to best use our skills as veterans to increase the chance of success. The incubator managers, all civilians, said it best: veterans moved faster, worked easier, resolved our issues decisively, and built teams more cohesively than our civilian entrepreneurs.

I, for one, reasoned that if I’d managed multiple deployments, getting blown up, daily convoys, and other high-pressure assignments, I could manage this. And if I couldn’t, my team members from the class would understand and give me a hand because we were all in the same boat. Never once did I feel in the course that I was competing with anyone; instead I felt like we could function as a small-teams unit.

It’s been awhile since I felt like that, and it was pretty great.

Don’t get me wrong, I already am a founder and minority partner in a writing communications firm and helped launch a charity racing team. I am not really “new” to the do-it-yourself party. But this was different. In those two cases, we hired accountants and lawyers and other professionals for technical details, and more notably, I wasn’t leading the charge for either organization.

Now I’m a chief executive officer. There’s a lot more of me — of my pride, of my money, of all of the emotions and efforts that you encounter when you put your best idea into action — on the line. If someone thinks your idea or your business is not going to work, it’s going to hurt a lot more. I have a team including an equal partner and a developer, both veterans, as well as a web designer. But everything is still much more personal this time. It’s terrifying. What if I fail?

Stress is also a constant companion. The Marine whose ceremonial sword is on my wall is now regularly woken up at some terrible hour to me popping my head up with a cry of, “Oh no … the emails!” in some sleep-riddled night terror. I must say this sort of beats the night terrors I had before, but somehow it’s slightly more embarrassing when you find yourself waking in a sweat because of imagined faulty market research rather than imagined gunfire.

But I’m also relieved because I’m doing something, and that something is mine. Succeed or fail, this program gave me the tools to feel like I had my team again, that team we come to rely upon so heavily in the service. In this course, I found my business partner, both of us entering with very similar ideas. I found mentors through this program dedicated to advising my company. I had incubator resources at my disposal, as the college incubator space offered its rolodex of legal, financial, and other business advisors and services. This course took my fears and my stress and showed me that I could use them to build something better. So I did.

Pathfinder — the idea I’ve nursed for over a year but this program finally nudged me to build — will help veterans of any age, race, gender, or era transition, as well as improve the overall community. It’s a review system, it’s a communications tool, and I’m very proud of what we are getting ready to officially launch in the fall. More importantly, I’m doing something I know fellow veterans need, something that many have said they want. It won’t make us millionaires, but it will serve a purpose. And as stressful as it is, that tangible, set purpose has provided therapeutic relief. I feel useful, I feel driven, and more motivated than I have in a long time.

And the best part of doing this through a veteran entrepreneur program is not only did I form my company, but I also know four other ingenious companies standing up that are powered by veteran brains. Health care, gaming, corporate leadership, and travel security all got a boost this summer as well. The team mentality holds strong: I’ll talk up their companies as readily as my own. Veterans support veterans, as well we should. None of us are in this alone, and this unity was driven home during the last 10 weeks.

Programs such as this one are spreading and for a good reason: Many veterans want to be empowered. They want to stand up for themselves, regardless of disability status or whatever someone along the way has told them they “can’t” do. We have a lot to contribute, and programs like these give us the knowledge to do so without spending two years learning about “synergy.” We veterans know how to build a team, so let us build one.

Entrepreneurship isn’t for everyone. It’s risky, it’s incredibly stressful, and the shouting matches with my partner about our shared “vision” can be pretty crazed. I don’t really recommend it for the faint of heart. But if you have a great idea, find this program or one like it near you. If another veteran has a great idea, get them involved and support them.

And, as my brand new company’s motto says: Build a better future.

Visit the website for more information on the NYU Polytechnic School of Engineering Veteran Entrepreneur Program.