Navy SEALs Can Explain Everything To You

Navy SEALs. They're some of America's toughest operators. They can swim and run for miles; trained to never give up... 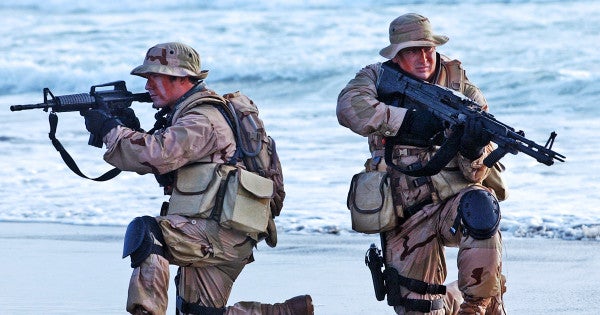 Navy SEALs. They're some of America's toughest operators.

They can swim and run for miles; trained to never give up while taking the fight to the enemy. SEALs can do everything from raiding Osama bin Laden's house to writing bestselling books about it afterwards. They are a wealth of knowledge on diving, reconnaissance, direct action, and telling you about being on “the teams” over drinks at your local watering hole.

But that's not all they know. SEALs know much, much more.

Have you ever been or do you plan on being attacked by a rabid dog? Well don't you worry, because a Navy SEAL has already explained what you're supposed to do if that happens.

Need to secure your home? Check.

Have trouble handling mistakes? Got it.

Want to be successful? Covered.

For the sake of diversity, I hope some day we'll see videos with titles like an Army Specialist Explains How To Avoid Your Supervisor, or A Marine Lance Corporal Explains How To Win The War In Afghanistan. But at least for now, we'll have to settle for Navy SEAL lessons on:

Navy SEALs have also offered advice on what do in active shooter situations such as the Las Vegas shooting. But perhaps the best advice is to just run in the opposite direction of Dan Bilzerian.