Military Leaders Sent Them On A Hasty, Ill-Planned Mission — And Are Now Blaming Them

The Pentagon has briefed reporters on its long-awaited investigation of the deadly Oct. 4, 2017 ambush in Niger, where four... 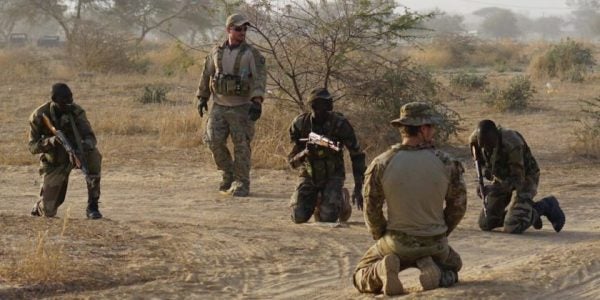 The Pentagon has briefed reporters on its long-awaited investigation of the deadly Oct. 4, 2017 ambush in Niger, where four American and four Nigerien soldiers were killed, and its report passes more blame on the fallen soldiers than the leadership above them.

I obtained a draft 8-page unclassified summary of the investigation by U.S. Africa Command, which offers findings and recommendations that it claims it based on “all available evidence” from the incident in Tongo Tongo. According to the report, the investigating team received photos, video, audio, and witness testimony from 143 people.

But most shockingly, amid the deadliest combat incident for American soldiers in Africa since “Black Hawk Down,” most of the blame in Africom's report is attached to the dead, who cannot speak in their own defense. On Oct. 3, 2017, an 11-man Special Forces team, including Sfc. Jeremiah Johnson, Staff Sgt. Bryan Black, Staff Sgt. Dustin Wright, and Sgt. LaDavid Johnson, left their outpost on what The New York Times described as a “routine, low risk patrol with little chance of encountering the enemy.”

The report, however, says the Green Berets and their Nigerien counterparts — referred to as Team Ouallam since that's where they were based out of — went out on a counterterrorism operation “targeting a key member of ISIS.” This however, then raises the question: If they knew they were conducting a raid on a terrorist stronghold, why weren't they all wearing body armor, carrying heavy machine-guns, and rolling in bulletproof vehicles? And why, when raids can go wrong so quickly, was there not close air support standing by or a plan for medical evacuation should it be needed?

These are the questions I raise, which are not substantially addressed in the report.

Instead, the report says that prior to their deployment to Niger, “personnel turnover” prevented the team from conducting “key pre-deployment collective training” (blaming the soldiers for not conducting the training their command should have been keeping track of). It goes on to mention the team did not carry out “pre-mission rehearsals” (something that just about every single American unit in Iraq or Afghanistan likely fails to do on a daily basis, given their operational tempo), and claims that “only two members of Team Ouallam were wearing their Personal Protective Equiment (PPE),” adding that some members put it on while others did not (again blaming soldiers for not wearing body armor, when clearly they were not briefed on intelligence indicating they needed it on at all times).

There probably would have been a far different result had the soldiers been given air on station or bulletproof trucks with .50 caliber machine-guns mounted on top, and it would not have mattered if they were wearing their flak jackets or ESS goggles.

This report's assertions are absolutely shameful. Four American soldiers are dead because their mission was repeatedly and hastily changed; they were given thin-skinned vehicles with no heavy weapons, had no air support or medevac support nearby, and apparently not enough intelligence that could have told them a force of 50-plus insurgents was working to surround them with mortars, heavy machine-guns, and rocket-propelled grenades. Most of these problems can be traced back to the team's leadership, but instead this report seems to give them a pass.

Still, the answer to some questions can be found when reading between the lines of the report which says the initial Concept of Operations (CONOP) — an Army document that outlines a commander's intent, the objective, and how the mission should play out — was not approved “at the proper level of command.” The mission was approved at the captain's level, the report says, where both he and the team commander “inaccurately characterized” the mission's true intent, which would have required much higher-level approval.

Soon after the team made initial contact with the enemy, they called in troops in contact. Amid a hellish firefight from all sides, the report says, a driver of one of the friendly trucks made a radio call saying they were going to be overrun. “The radio call occurred 53 minutes after first contact and was Team Ouallam's first request for assistance,” it says, which can be read as the team's fault for not asking for help on the radio sooner, when you can watch the helmet-cam footage and see that the situation was incredibly desperate, and there was little cover to be found.

To their leadership's credit, the captain who approved the initial mission alerted both Nigerien forces and his Special Operations Command bosses soon after troops in contact was called in, but as the timeline is detailed in the report, it is clear that proper planning was not done ahead of time (emphasis added).

The first sign of support didn't come until 47 minutes later — an eternity in a firefight, especially in this one when the Americans and Nigeriens were surrounded by a much larger force. Illustrating the failure of planning is this line: “All four soldiers were killed in action before French and Nigerien responding forces arrived in Tongo Tongo.”

And even then, “the French aircraft were unable to engage because they could not identify U.S. troop locations and did not have communications with the team on the ground” (Who in leadership was supposed to ensure the troops vehicles were properly marked, and were friendly troops given infrared or other markings on their uniforms that could be seen from the air? The report doesn't say).

If you want to see the one moment of pure truth in this report, it not surprisingly comes toward the end, which I will reproduce here in full:

What this translates to is that someone back at U.S. Africa Command failed to put together clear guidance on what operations would be approved and by whom. Meanwhile, in Niger, the team's company command leadership was “copying and pasting” together documents related to future missions, thus setting up these four Americans for failure.

The lack of “situational awareness and command oversight” is what killed these men, not their lack of protective gear.