"Like many military veterans, Memorial Day is not abstract to me. It is personal; a moment when we remember our friends." 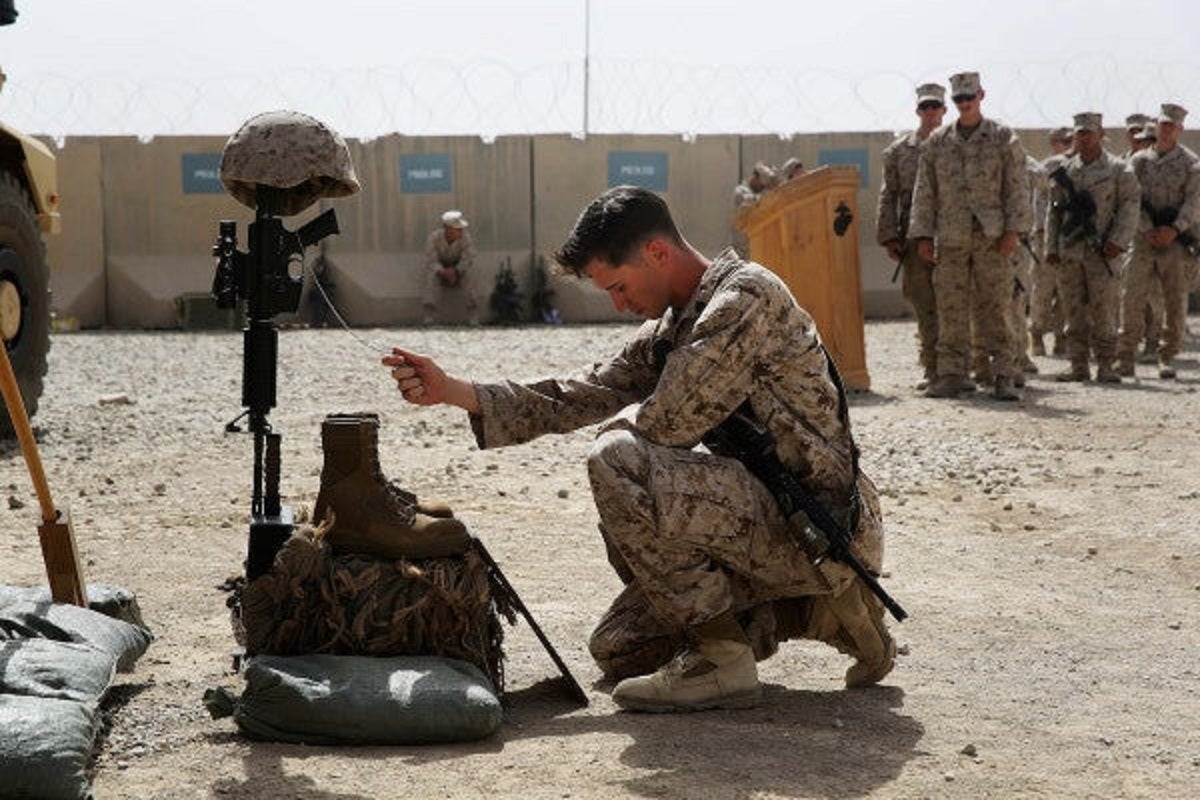 How you die matters. Years ago, on Memorial Day, I was in Fallujah, serving a year-long tour on the staff and conducting vehicle patrols between Abu Ghraib and Ramadi. That day I attended a memorial service in the field. It was just one of many held that year in Iraq, and one of the countless I witnessed over my 20 years in the U.S. Marine Corps.

Like many military veterans, Memorial Day is not abstract to me. It is personal; a moment when we remember our friends. A day, as Oliver Wendell Holmes said, “sacred to memories of love and grief and heroic youth.”

Wherever a Marine is killed, we pause for a moment to remember. But memorial services “in country” are different than most people think. First, there is no body or casket — those are already on their way back to Dover and their families in the United States. What serves in its place are a pair of boots and a rifle stuck into the ground by its bayonet, a set of dog tags hanging from the pistol grip of the rifle and a kevlar helmet resting atop.

These are the desperate attempts of young men and women with so much of life ahead of them to cope with death and to come to grips with life’s finite quality.

The service begins with the chaplain offering a prayer, followed generally by two readings from the Bible. Rarely is the New Testament selected. The Old Testament seems more germane. The comrades of the fallen don’t want to hear talk of salvation, but instead long to find comfort in knowing that this life, the here and now, may be spent on a worthy cause. Three verses are most common: first is Ecclesiastes 3:1-8, which reminds us that “to everything there is a season.” The other two are the 23rd Psalm, reassuring us that, yes, indeed, the Lord is our shepherd, and Isaiah 6:8, which triumphantly exalts the willingness of those to serve: “Then I heard the voice of the Lord saying, ‘Whom shall I send? And who will go for us?’ And I said, ‘Here am I. Send me!'”

The ceremony takes a breath, and music, such a vital part of military rituals, sends the assembly into quiet reflection. Often it is the haunting, despondent call of a bagpipe as it moves through the notes of “Amazing Grace.” At this point in the service, close friends of the fallen are called to offer their reflections. If they lack the eloquence of accomplished public speakers, they more than make up for it with heartfelt tribute, unspeakably tragic.

In one service on that Memorial Day 10 years ago, a corpsman of a reconnaissance team reminisced about the moments with his dead friend, a corporal, and what a unique experience of comradeship they shared. They didn’t get drunk or raise hell in town. No, there was no chance for that in Fallujah. What they shared was battle. He paused, trying to regain his composure, and spit out his most meaningful line: “He died a warrior’s death.” Soldierly virtue is valued above all else.

In another ceremony, a young corporal noted how his friend, a lance corporal, with his saggy pants and eyes of mischief, came into the Marine Corps because he was a troubled teen in a broken home; he wanted to become a man. He recalled playing endless hours of pool, and how in Iraq, his friend had displayed a quiet confidence that made people want to follow him. “He was the most persistent person I ever met. I would have followed him anywhere.”

In yet another, a young private first class spoke of his company medic, the most complete leader he ever knew, who pushed everyone to be his best, who volunteered for patrol after patrol, only to be killed by a sniper’s bullet two days before he was to fly home for his two-week furlough to witness the birth of his first child.

And in another, a sergeant shared remarks obviously rehearsed several times over, but even with all the preparation, he was still unable to compose himself. He paused, took a deep breath, and prematurely concluded, “I’m sorry. It’s just that he was my best friend.”

We are witness to what is most hideous about war: its waste of life. A nation’s treasure is in its youth, and their loss is beyond measure because it is irretrievable. They were singularly trusting. They solicited no assurance on the prompt surrender of their lives. They demanded no social privileges, no distinctions, as they willingly walked into the valley.

Finally, a last tradition is observed. The company first sergeant marches to the front of the room, faces the assemblage, calls the room to attention, and calls the roll. One by one, each Marine replies “present” in a loud, firm voice. Then, the first sergeant calls out the name of the fallen, only to be met with a somber silence. Again, the Marine’s name is called, and again no response. Finally, after this second pregnant pause, the Marine’s full name is announced. First. Middle. Last. Physically and symbolically, the Marine is missing from the formation, signifying that he or she will never be with us again. A bugle in the rear plays “Taps.”

In a speech delivered on May 30, 1884, at Keene, New Hampshire, Oliver Wendell Holmes reflected that on Memorial Day, “we are in the presence of the dead. … Young and gracious faces, somewhat remote and proud, but with a melancholy and sweet kindness. There is upon their faces the shadow of approaching fate, and the glory of generous acceptance of it.”

Holmes does not lament their passing, but exalts them, for they devoted their lives to something larger than themselves, as all generations, perhaps, should. He notes that any generation that carries out a war “has been set apart by its experience. Through our great good fortune, in our youth our hearts were touched with fire. It was given to us to learn at the outset that life is a profound and passionate thing.”

He concludes thus, “But grief is not the end of all. … Our dead brothers still live for us, and bid us think of life, not death — of life to which in their youth they lent the passion and joy of the spring.”

There is a duality in Holmes’ messages: He does not deny the reality of man’s inhumanity to man, or prate of glory and intrepid gallantry. He sees war as a part of the human condition, yet he sees nobility in living life to its top, spending youth in a worthy cause.

I saw evidence of his reasoning every day when I was in the Marine Corps. He said it eloquently. I observed the eloquence in human form. And I remember.