To many people, the idea of diving underwater, wriggling inside of a submarine torpedo tube no bigger than a broom … Continued 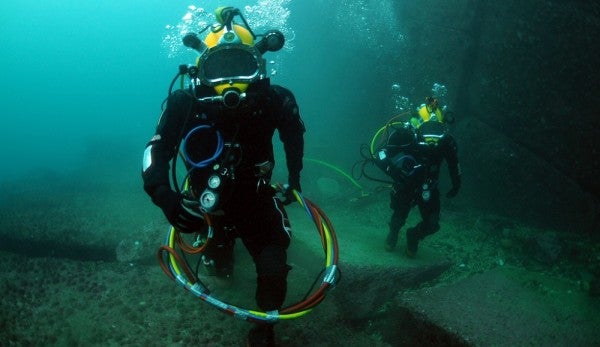 To many people, the idea of diving underwater, wriggling inside of a submarine torpedo tube no bigger than a broom closet, with nothing but a thin piece of plastic between you an ocean’s worth of water, sounds like hell. For Navy divers like Tommy McConnell, it’s the kind of hell he loves.

It’s what they do, day in and day out: dive to incredible depths, where they do repairs, conduct salvage operations, and try not to be harassed by sharks, eels or get lost among the silt and darkness of the ocean floor.

Related: Confessions Of A Navy Diver »

McConnell, who also runs the entertainment and apparel site 15 Fathoms, has been a Navy diver for six years, and between two deployments, one to the Middle East and another to the South Pacific, he’s racked up a number of crazy stories — like that time he almost got lost 190 feet below the ocean’s surface.

“Once you’re down there at depth, because of the high partial pressure of nitrogen, your mind is sort of reduced to that of a child,” McConnell told Task & Purpose. It’s like being really, really drunk and trying to start a car. “You know you’re kind of thinking through it, like ‘here we go!’”

While stationed at a mobile diving salvage unit in Hawaii, McConnell went on a dive to recover an F-18 Super Hornet that suffered full engine failure and crashed, but, once you start operating hundreds of feet underwater, the high pressure begins to have an impact.

McConnell and another diver took a stage to the bottom. The stage is essentially an elevator, which ferries divers from the surface to depth, and then back up. After the first diver made his way to the downed F-18, he gave McConnell the go-ahead to move out.

At 190 feet below sea level, holding on to the other diver’s umbilical, McConnell began taking deep breaths and felt the nitrogen narcosis set in — an alteration in consciousness that happens to divers working at depth. His thinking became more simple and his speech, well, it came out like this: “Here I go. [Long pause] I’m going to make my way to you , Jones.”

As McConnell began moving, he lost his grip on the umbilical, and couldn’t see the other diver.

“You’re basically diving in milk,” he explains. “You can’t see your hands in front of your face and you're completely out of it. … So I’m talking to topside and I’m like, ‘Topside. Topside, I’m very sorry. I’m very sorry. I can’t find Jones. And I don’t know where I’m at right now. Can you find me?’”

The other diver turned 180 degrees, walked 10 feet back, picked up the umbilical and said, “Here, man, put this in your hand.”

Then together they moved to the F-18, wrapped the cables around its landing gear — it came to rest upside down on the ocean floor — and finished the mission.

“Sometimes you know what you’re about to do is just fucking crazy, but you go ahead and do it anyway,” McConnell says. “You get through it and once you do, you see what your limits are.”

Just another day out on the water.