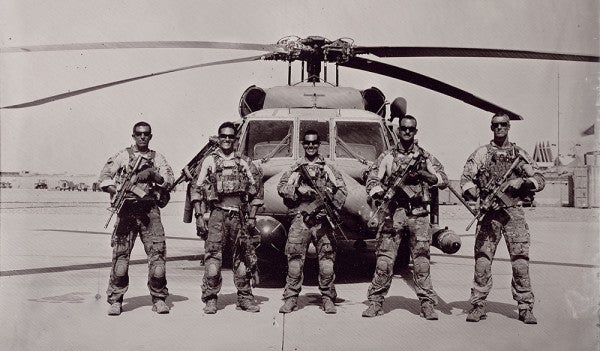 At first glance, it feels like you’re staring at the kind of old photo that belongs on your grandmother’s mantlepiece. It’s strange because the man in the image is young, yet the picture makes you feel out of touch with time. He wears a modern uniform, but the photo looks worn and aged, down to the splotches and burn marks, gently marred with an opaque hue and touched by faint discoloration.

What separates this style of photography from more modern images that we’re exposed to on Facebook, Instagram, in the news, and on your computer, is that this simple portrait, devoid of both pretension and motion, is taken with a very old technique.

It’s called a tintype, and this is photographer Ed Drew’s specialty.

Drew joined the military a year after graduating James Madison High School in Brooklyn, New York. The 33-year-old veteran spent six years in the Air Force as a C-130 engine mechanic and later enlisted in the Air National Guard as an aerial gunner. He still serves as a staff sergeant.

Drew’s first exposure to tintype was through the work of National Geographic photographer Robb Kendrick. The technique involves exposing an image onto a very thin sheet of iron or aluminum and then developed in a darkroom with chemicals, like film.

It was developed in the mid 1800s just before the Civil War, where tintype made its debut. It was also the last time tintype photos were taken at war until Drew deployed to Helmand province, Afghanistan, in 2013.

The late 1800s was the pinnacle of tintype photography, but it wasn’t seen as art; rather, it was used solely for documentation, with tintype photos capturing the grisly nature of the Civil War. This would develop over time as the field evolved alongside the technology.

“The sense of ‘nostalgia’ didn't exist in the medium until recently,” said Drew in an interview with Task & Purpose, which came as a surprise, because looking at his photos, one is immediately reminded of the iconic Civil War images of soldiers; the photos men would take for their wives and loved ones back home, before heading to war.

“You look at these images and then back at those and they held the exact same meaning,” said Drew, comparing his photos to their Civil War predecessors. “The soldier wanted a portrait of their family. It was sometimes the first or the last portrait they ever had of themselves. It had a historical nature and reason behind its existence.”

And, it is precisely this sentiment that motivates Drew, who sees his work not as war photography, but as a collection of family photos.

“I didn't photograph service members in my mind, I photographed only my co-workers and people I had known for years. My photos were more of a family album in that sense, being part of combat rescue is a brotherhood,” said Drew, who manned a door-gun aboard rescue helicopters. “I photographed them to also show the humanity of men in arms and the timelessness of soldiers, be it in the Civil War or Afghan War. Doing it in Afghanistan was because I'm an artist and its just natural for me to photograph things wherever I'm at.”

The nature of tintype photos also affects the composition of the image, resulting in posed and static portraits — far different from the fast-paced imagery of the modern world, or the high-resolution, hyper-detailed shot taken on a professional digital camera.

“The formal portrait photograph is more studied and ponderous,” Drew explained. “Mix that with the old time look and you get a very timeless image. It is one of the themes I was relying on to recall past wars and the timeless nature of combat.”

But, saying it and doing it are completely different and Drew admits that convincing a bunch of forward-deployed service members to participate in what he himself admitted was an art project was occasionally a challenge.

“Initially I don't think they had a concept of what I was talking about or trying to do,” Drew said. “Combat rescue doesn't attract too many art types, so the idea was abstract and more of a novelty. When they actually saw the craft involved and the beauty of the images, I was literally making appointments for people.”

This was especially true for his co-pilot who had been refusing Drew’s offers for a photo until his wife pressured him to send one home. After taking making the tintype photo, Drew snapped a picture of it on his cell phone and sent it to his friend who in turn sent it to his wife.

“He said that the day he sent it to her, she went out and printed it in 8-by-10s and wallet-sized portraits and his family absolutely loved it,” laughed Drew. “She still buzzes to this day about how great of a portrait this is. That photo for me, embodies precisely what I was doing, which is trying to make a record of the people I work with, to honor them and make them proud of themselves and give them something to show others.”

“I was just doing this because these were my family members, and like any family I wanted them to look in good their photo.”

You can find more of Drew’s work on his personal website.