The Tragic Truth Of Accidental Deaths In Combat Zones

The only person who died during my deployment to Iraq in 2003 to 2004 was U.S. Army Sgt. Landis Garrison. … Continued 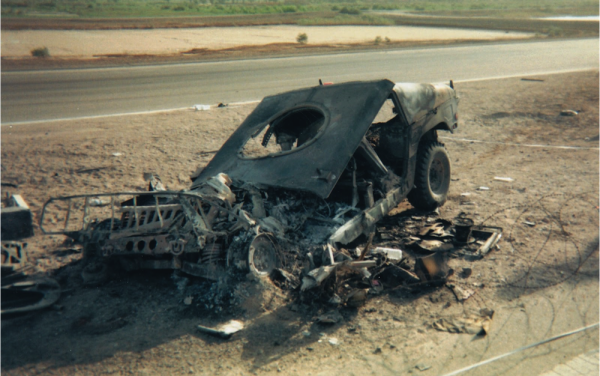 The only person who died during my deployment to Iraq in 2003 to 2004 was U.S. Army Sgt. Landis Garrison. Other people, such as Brandon Ramsey of the 933rd Military Police Company, died, but they were not from my unit, the 333rd. Still, the manner in which both Ramsey and Garrison died is similar. They were not shot by insurgents. They were not blown to bits by mortars or improvised explosive devices. No, none of that. They died from preventable causes. They died from accidents.

This is not to say that my unit didn’t experience its fair share of close calls. Twice my vehicle was hit with an IED. The first time was worse than the second. Other members of my company experienced the shock of rocket-propelled grenades. But all of these things, which may be cool to talk about in a bar, pale in comparison to Garrison’s death and the death of others.

On Aug. 8, 2003, 21-year-old Ramsey became a member of what I call the One-Fifth Club: Approximately one-fifth of those who died during our nation’s wars in Afghanistan, Iraq and Vietnam died from what the Department of Defense labelsnon-hostile causes, also known as accidents, suicides, friendly fires, and illnesses. In Ramsey’s case, his Humvee rolled over. His driver hit a pothole, and Ramsey was ejected from the vehicle, breaking his neck. Soon thereafter, my company was informed on how we should proceed in the event of a rollover: The gunner should drop out of the turret and down into the Humvee, and those inside should try to help pull him or her in.

Again, Ramsey was from another albeit similarly based military police company. The worst thing to happen to my company occurred on April 29, 2004, after my unit had spent close to 12 months in Iraq.

We were in our living quarters, when Garrison, just playing around, inadvertently shot himself. Spc. Fagerstrom said that he had this “oh crap” look on his face, as if Garrison realized what he had done all too late. There was evidently a round in the chamber of the pistol he had pulled out from behind a friend’s back.

First aid was administered, and a group of men rushed Garrison out on one of those green- or brown-colored Army blankets. It took an hour, but eventually, we were told of Garrison’s passing. He had been my age at the time: 23.

Prior to this, the worst thing to happen to my unit occurred on July 14, 2003, when I was in south central Iraq, pulling security at a relay station along Main Supply Route Tampa, the main albeit desolate-in-most-places highway. In other words, I was guarding a radio antenna in the middle of nowhere.

Around 12 in the afternoon, my 19-year-old friend, Spc. Garriga, and his team, who had spent the entire night on a 12-hour patrol, were awakened from their nap to help pull security at the relay. Garriga and crew got little sleep, but they had their orders.

Two Humvees left camp for the expectedly short, innocuous trip. Our platoon sergeant and others took the lead. Garriga and crew trailed. In less than a mile, they wound through the jersey barriers of our southernmost checkpoint.

As both Humvees cleared the barriers, their occupants noticed that on the opposite side of the roadway, the checkpoint sentries had their guns drawn, aimed, and ready to fire upon an Iraqi owned vehicle. Our platoon sergeant panicked and screamed at the driver of his vehicle to stop. The driver slammed on the brakes, but Garriga’s driver — not noticing what was happening in front of him — rear-ended the lead Humvee.

An instant fireball erupted. Garriga was thrown from the turret of his Humvee onto the fire-engulfed hood, receiving second- and third-degree burns. Other people were also burned or injured, but Garriga's wounds were the worst. Two years would go by before I ever saw him again. Forty-five percent of his body had been burned. On two separate occasions, his parents were told by doctors that he would not make it.

Garriga lucked out of the One-Fifth Club. Ramsey, Garrison, and 928 other Iraq veterans did not. As evidenced by the 2010 Virginia Commonwealth University article and confirmed bythe Defense Casualty Analysis System, which is updated weekly, they — including those who had served in Afghanistan and supporting locations — died from accidents first, suicides or self-inflicted causes second. For Vietnam, it wasaccidents first, illnesses second, self-inflicted causes third.

Accidents, we all know, happen for various reasons, but when you get deployed to a combat zone, you don’t think you’ll be shot or blown up because you, or your fellow soldiers, are not paying attention to what you, or they, are or should be doing.

After the accident with Garriga, there was an effort to get his driver to sign a document, making him culpable for all that had occurred on July 14. In addition to people getting injured, a lot of equipment — such as night-vision goggles, two Humvees, a combat-net radio, an automatic grenade launcher, and other weapons — was destroyed or rendered inoperable. Though the driver of the vehicle still has his share of responsibility, he was smart not to sign the document. Any sleep deprivation issue aside — is it safe to assume that the fire that almost killed Garriga would have happened had it not been standard operating procedure to strap fuel cans onto the rear of our Humvees?

Although my company was informed on how to proceed in the event of a rollover following Ramsey’s death, it didn’t seem to matter if other soldiers were similarly informed. An analysis of the U.S. Army’s ground-accident database by the Dayton Daily News found thatmaybe only 27 of the 93 worldwide fatal Humvee accidents from 2001 to 2005 involved gunners, and a 2012 report by the Johns Hopkins Center for Injury Research and Policy found thatserving as a Humvee operator, not just a gunner, posed an equally great risk for injury.

Since the release of some of the publications cited above, there have been efforts to reduce non-hostile deaths in the U.S. military, but have those efforts really paid off? If you look atthe statistics for the operations that have so far replaced Enduring Freedom and Iraqi Freedom, non-hostile deaths are about equal to or exceed hostile ones. For Operation New Dawn, which lasted little over a year from 2010 to 2011, there were 35 non-hostile deaths compared to 38 hostile ones. For the ongoing operations Inherent Resolve and Freedom’s Sentinel, the non-hostile to hostile deaths are 12 to 1 and 10 to 10, respectively. Accidents are not the leading cause of death for two of the three most recent operations, but a non-hostile casualty rate greater than one-fifth is clearly present for all three. Can we reasonably expect, or accept, this to be the norm going forward?

The incidents with Garriga, Garrison, and others happened more than 10 years ago, and enlisting in any branch of the armed forces comes with consequences. But the mistakes that ended, or nearly ended, the lives of not just a few but thousands of U.S. soldiers should propel anyone with any degree of power, from the boots on the ground to the highest of offices, to change an alarming trend.