"Rather than waiting until someone has a back or neck problem, we’re already training to be stronger before problems occur." 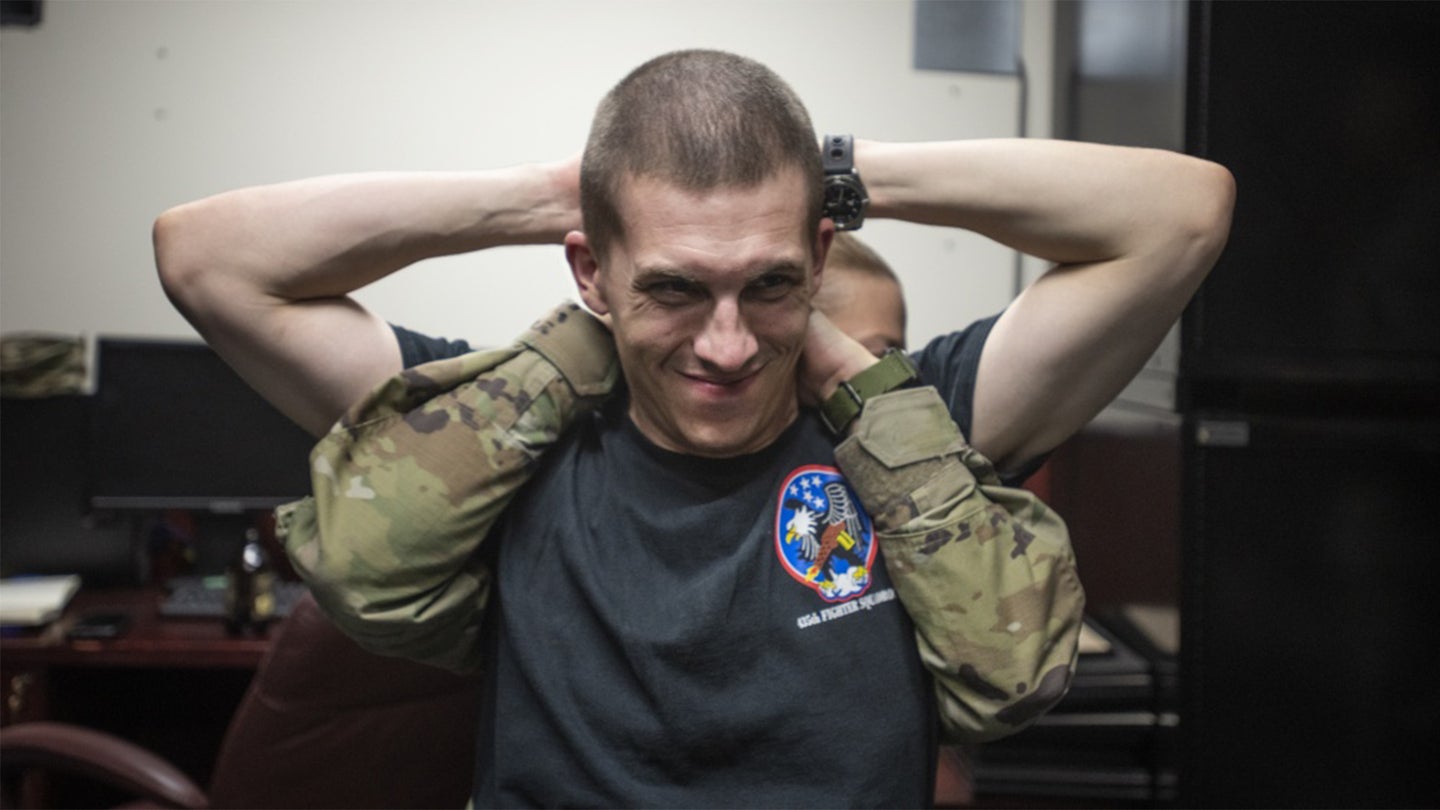 Flying a supersonic fighter jet can be a real rush, but it can also be a literal pain in the neck. That’s because turning an aircraft traveling at hundreds of miles an hour cranks up the G-forces so that thousands of pounds of pressure pile onto the pilot’s body, which leads to neck and back pains since the pilot still has to sit up straight and look around to fly the aircraft.

To ease the pain, the Air Force contracted athletic trainers, strength coaches and massage therapists to help pilots better prepare their bodies for the strain of G-force. It seems to be having an effect, as one pilot said in a recent press release.

“A lot of the pain from flying is caused by the positions that we sit in. It leads to the body compensating and building muscle in places that aren’t natural for the human body,” said Capt. Brad Sullivan, an F-15E pilot assigned to the 422nd Test and Evaluation Squadron at Nellis Air Force Base, Nevada. “Since I have been regularly seeing my trainer, I have had little to no pain over the last three months.”

The trainers at Nellis are one aspect of a larger program called the Human Weapons System Program, which has brought similar resources to all of Air Combat Command, Pacific Air Forces and United States Air Forces in Europe – Air Forces Africa. And no, it’s not just a perk to coddle pilots. Neck and back pain is actually a serious problem that leads to the Air Force losing experienced aviators they spent years and millions of dollars training.

In fact, according to a 2012 study by the journal Aviation Space, and Environmental Medicine (now called Aerospace Medicine and Human Performance), 72% of surveyed Royal Norwegian Air Force pilots experienced neck pain in relation to flying, while 35% experienced back pain. Neck rotation was a major cause of grief for the pilots, particularly “checking six,” the study found.

The Air Force can’t afford to lose pilots for any reason these days, not with airline companies offering six-digit annual salaries, the Center for Strategic and International Studies wrote in 2020. According to CSIS, the Air Force’s pilot deficit grew from 1,500 in 2016 to 2,100 in 2020. The coronavirus pandemic temporarily plugged up the talent drain since airline companies stopped hiring while nobody was traveling anywhere, but experts warn the drain will open up again as travel resumes.

With all that said, it makes sense that the Air Force would shell out some extra cash for massaging a few pilots so they don’t wash out due to injury, or have to go through difficult procedures like disc replacement surgery.

“The idea behind the program is the preventive maintenance,” said Maj. Clayton “Red Beard” Cruichshank, F-15C pilot assigned to the 433rd Weapons School, also at Nellis. “Rather than waiting until someone has a back or neck problem, we’re already training to be stronger before problems occur, so we’re better able to handle the stresses.”

There are a few follow-up questions here, like the fact that flying a fighter jet is far from the only back-breaking job in the military. For example, I’m sure thousands of loadmasters, helicopter crew chiefs, security forces airmen, maintainers, and countless other enlisted troops would love a massage or two at the end of a long flight, shift or patrol.

“At the end of every night I’m sitting there holding my helmet with my hands,” one Army Black Hawk helicopter crew chief told Task & Purpose about the 14 to 17 pounds of helmet and gear tied to his head all day. “It doesn’t matter how strong you are, your neck can’t support that weight for that long.”

Musculoskeletal injuries account for a huge portion of early military retirements every year. On Monday, an Army press release detailed how such injuries account for more than 2 million clinical visits a year in the Army alone, and 60% of the 10 million limited duty days prescribed to soldiers each year.

The most common causes for these musculoskeletal injuries were running, lifting or moving heavy objects, according to one study of a large infantry division noted by the Army this month. Walking, hiking, road marching and sports and recreation also accounted for many injuries.

The difference could be that most other jobs in the military do not require as much training as a fighter pilot does, and the military does not face as competitive a job market to hire more of them. Other service members may still be able to access physical trainers, massage therapists or strength coaches through their local fitness or medical center, but it may not be as easy as your unit having a dedicated contractor to fill that role.

That’s a bummer for anyone carrying a heavy pack out there, but hey, at least now you have a better chance of an experienced pilot flying air support for you. In that sense, the Human Weapons System has some nice perks for everyone else too.

“When pilots come back and tell me that their pain level is reducing and their mobility is improving, that is what is most rewarding to me,” said Alia Ware, a contracted athletic trainer from LMR Technical Group, the company which provides athletic training and strength coaching for fighter pilots at Nellis. “Being able to help the people who serve our country is more than I could ever ask for.”

Related: This Air Guard fighter pilot is the first in the world to return to duty after disc replacement surgery