"I was determined to turn this around ... I knew it was going to take time. I needed to be patient." 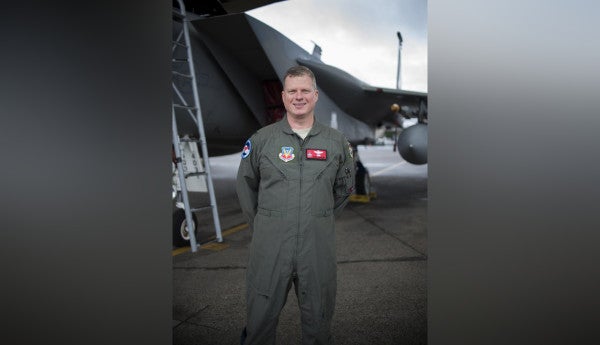 Fighter pilots are awesome because they make gravity look optional, and they do it at supersonic speeds. But flying tight maneuvers at high-Gs takes a toll on the human spine, and fighter pilots often suffer lifelong injuries that forces many of them into an early retirement.

That's why Col. Todd Hofford, an Oregon Air National Guard F-15 pilot, just broke a major barrier by becoming the first pilot in the world to return to the cockpit of a high-G fighter after undergoing disc replacement surgery, which until now, the Air Force has been hesitant to allow.

“I was determined to turn this around,” said Hofford in a recent article by Tech Sgt. Steph Sawyer for the 142nd Fighter Wing Public Affairs. “I knew it was going to take time. I needed to be patient.”

To understand Hofford's achievement, you need to know how bad fighter jets can be for the spine.

According to Sawyer's reporting, the human head weighs about 12 pounds, and the Joint Helmet Mounting Cubing System adds another six. That's fine under normal gravity, but when a fighter pilot is pulling 9Gs in a maneuver, it means gravity acts nine times stronger on the pilot than normal.

The strong gravity makes an 18 pound head-and-helmet combo weigh 162 pounds, every one of which the bones and muscles of the neck must still support. Career pilots spend a lot of time under that strain, which leads to injuries. Lots of injuries.

“The strenuous occupational demands endured by our military aircrew have resulted in a host of musculoskeletal disorders, with the highest reports related to low back pain and neck pain,” wrote Dr. Peter Le, a biomedical engineer who leads the Navy's Spine Health Improvement Program, in September. “These reports are associated with high medical costs, inability to fly, as well as reduced productivity and performance, thereby affecting operational readiness and effectiveness.”

According to a 2012 study by the journal Aviation Space, and Environmental Medicine (now called Aerospace Medicine and Human Performance), 72% of surveyed Royal Norwegian Air Force pilots experienced neck pain in relation to flying, while 35% experienced back pain. Neck rotation was a major cause of grief for the pilots, particularly “checking six,” the study found.

Sawyer also quoted a 2018 dissertation published by Finland's University of Jyvaskyla which found that the overall rate of spinal disorders reported in fighter pilots over their lifetimes ranges between 89% and 93%.

Hofford, who tallied 2,500 hours of flying over a 27-year career, was no exception. He started to notice a knot in his back where the muscles were trying to compensate for a compromised disk, followed by pain in his arms and tingling in his fingers.

In August 2016, Hofford lost strength in his right arm completely. He would need surgery to correct the herniation in his cervical spine (the medical term for the neck segment of the spine). But the surgical procedure Hofford chose, Sawyer reported, could have ended his fighter-flying career just as easily.

Herniated discs in American military pilots are often corrected with spinal fusion, where the damaged disc is removed and the bones on either side of it are fused together. Historically, Sawyer wrote, pilots who undergo the surgery are able to return to flying, but the problem with the surgery is that some range of motion is lost. That means the pilot has to work harder in other places to compensate, which leads to adjacent segments of the spine wearing out and requiring additional surgery.

Enter disc replacement surgery, where surgeons replace the herniated disc with a prosthetic, thereby allowing pilots the same range of movement they enjoyed before. The procedure has been around for 12 years in the U.S., and 20 years in Europe, but the Air Force is still feeling hesitant about it, Sawyer reported. Thus, Air Force pilots who undergo the procedure are limited to flying low-G aircraft, not fighter jets.

But that didn't stop Hofford. After he came out of surgery in September 2016 and made a full recovery, he was determined to get back in the Eagle. Luckily, he also had allies to help make the case for him.

“I think I'm the only person in the world who has more than 300 hours in fighters and has put in more than 400 artificial disc replacements,” said Col. John Hall, the Air National Guard Assistant to the Command Surgeon, PACAF, and a board certified, fellowship trained orthopedic spine surgeon in private practice in Arizona.

Hall has performed the third most prosthetic disc surgeries of any spine surgeon in America, Sawyer wrote, and he's all about trying to get pilots back in the sky. Hall described artificial disc replacement as the “gold-standard surgery,” for aviators, Sawyer wrote, but “it was costing them their careers.”

“I realized with my experience in tactical aviation and as a spine surgeon, there was a possibility that we would be able to return these people to their full flying duties,” Sawyer reported Hall as saying.

Another ally was Randy Ziobro, a physical therapist and the developer of Fit4Flight, a program designed to prevent and treat injuries caused by the strain of flying military aircraft.

“It's about flying the Eagle and having mission readiness on 100% status for their spine,” Sawyer reported Ziobro as saying. “But it's about what their life after the military is going to be also.”

Zioboro and Hall got to work building up Hofford's case. Hall researched worldwide scientific literature on how artificial discs withstand tactical aviation; used computer modeling to analyze how the disc would behave during an ejection; worked with Air Force medical units all over the country; and even put Hall through an F-15 reevaluation centrifuge to see how his neck would stand up to the pressure. Hofford passed with flying colors, Sawyer wrote.

Based on his physical performance, Hofford was granted an unrestricted waiver to return to flying the F-15. The pilot is now the first member of a study to evaluate his physical condition as he continues to fly, and five more pilots have started the post-disc replacement evaluation process after him, Sawyer wrote.

“It's a privilege and an honor to be able to fly, fight and win in one of our weapon systems,” Hofford said in the article. “I'm connected to the mission. I get to be part of protecting the homeland, and that's extremely meaningful.”