“Upon initial inspection, there was little hope the aircraft would be fit to fly." 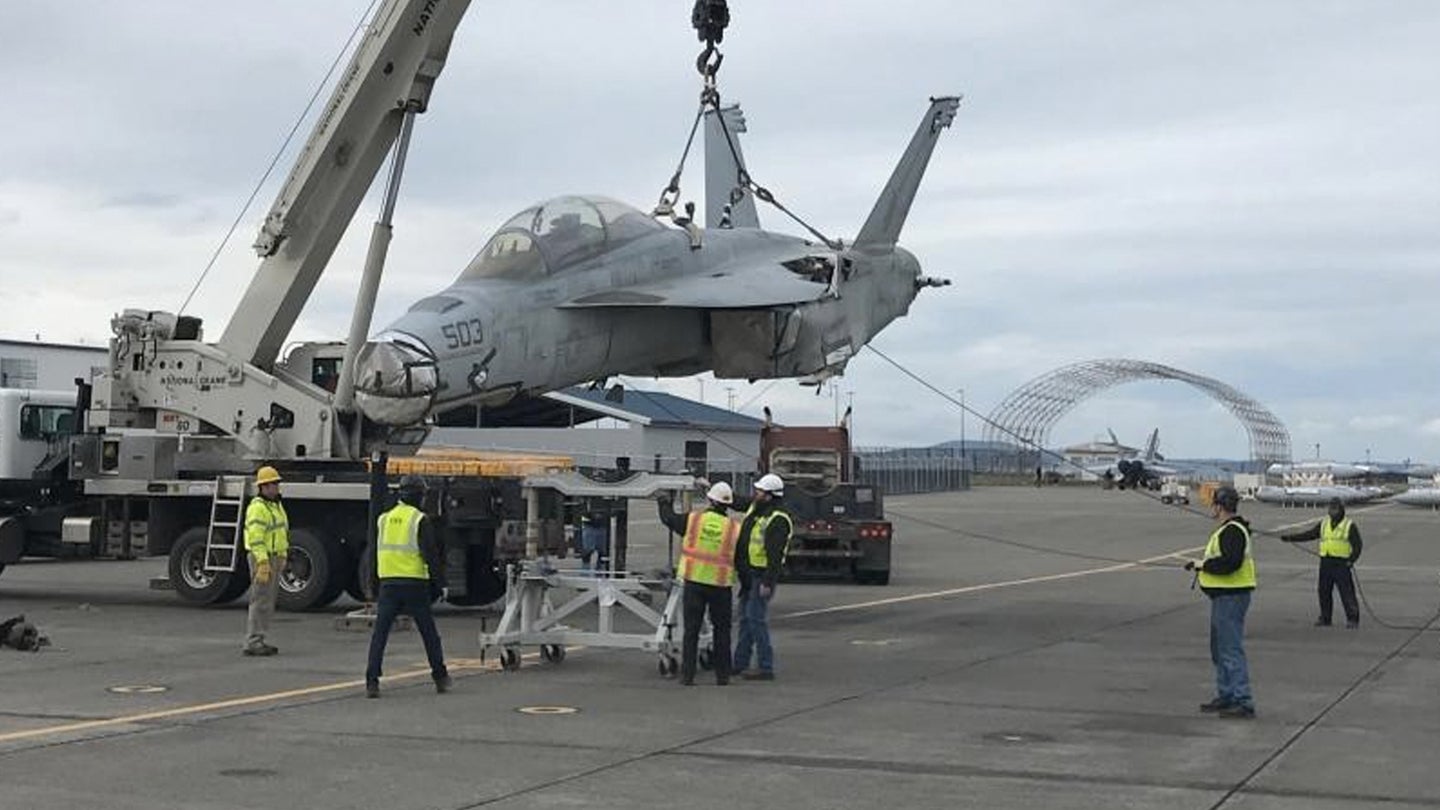 Ghosts and zombies are not the only things returning from the grave this Halloween. Almost exactly five years after colliding with another aircraft in a training mission, a Navy fighter jet thought to be beyond repair has returned to the skies in a significant accomplishment for the service’s aircraft maintainers.

“It was truly amazing to watch the entire Naval Aviation Enterprise team come together to get this much-needed asset back up to flight status,” said Capt. David Harris, commodore of Electronic Attack Wing Pacific, in a press release about the repair published on Friday.

The jet is an EA-18G Growler, a variant of the F/A-18 fighter jet flown by famous groups like the Blue Angels or Tom Cruise and his band of hotshots in Top Gun: Maverick. The Growler is an electronic warfare jet that can confuse enemy radars, help suppress air defenses, and jam communications.

One such Growler assigned to electronic attack squadron VAQ-136 was flying a training mission at Naval Air Station Fallon, Nevada on Sept. 14, 2017, when disaster struck. The jet collided with another aircraft assigned to Carrier Air Wing 2, though the press release did not provide further details on the other aircraft or how the collision occurred. Thankfully, both aircraft landed safely and no aviators were harmed, but the $67 million Growler looked finished, especially after its wreckage sat at Fallon for several years following the incident because nobody knew how to repair such a beat-up jet.

“Upon initial inspection, there was little hope the aircraft would be fit to fly due to the complexity of the repairs required following the mishap, as well as weather damage from years of sitting in a desert environment,” the press release explained. The jet also had “significant water damage,” according to training squadron VAQ-129, where the jet was assigned during its convalescence.

But, like Miracle Max determined that the hero Westley was “only mostly dead” in The Princess Bride, so too did Navy maintainers believe that the downed Growler was actually “slightly alive,” as Miracle Max would say. A clearance to repair the jet was finally granted in 2021, and that February the jet was transported via flatbed truck from Fallon to NAS Whidbey Island, Washington, to begin its long journey back to the skies.

The Navy described the project as “unprecedented.”

“For more than a year, engineers, maintainers, and artisans from facilities across the United States collaborated to develop processes, complete repairs and thoroughly inspect the recovered aircraft – more than 2,000 man hours in total,” the press release explained.

Tommy Moore, depot lead for Fleet Readiness Center Northwest, said that his team and other FRCs from the Southwest and Southeast reassembled the Growler by replacing all its major components. After 14 months of hard work, the special rework was complete, but the functional check flight did not take place until October 17.

Apparently it was worth the wait: the Growler will soon be transferred to an operational squadron “and be ready to conduct flight operations for decades to come,” the press release explained.

Military maintainers and depot repair crews have a knack for bringing “mostly dead” aircraft back to life. In 2021, the Air Force brought back to flight an A-10 Warthog attack plane that the pilot had to belly land in Michigan in 2017 after its 30mm cannon malfunctioned, blew off the canopy and stuck the nose landing gear in the up position. Through his incredible flying skills, the pilot managed to land the jet and walk away safely, but the Warthog itself was in rough shape, making it a worthy challenge for repair crews.

“We knew we could do it, but it would take a long time,” Daniel Wise, A-10 planning chief for the 571st Aircraft Maintenance Squadron, the unit at Hill Air Force Base, Utah which helped bring back the injured bird, said last year. To make matters worse, the A-10 was more than 40 years old and many of the streams of replacement parts dried up a long time ago.

“We basically rebuilt the entire front of the A-10 without aided engineering and unprocurable parts that had to be local manufactured,” Wise added.

It appears that Navy repair crews pulled off a similar Lazarus trick with the Growler, and hats off to them for a job well done.

“From the engineers who developed the needed repair designs, to the artisans who accomplished the complex repairs, to the VAQ-129 sailors who ultimately rebuilt the aircraft to a flight status; it was a true team effort,” Harris said.